Among the many fascinating stories often repeated by my Great Grandmother Rose, was the one about our French ancestry. According to Rose, her mother, Elizabeth Foulger, descended from De Fouriers who had escaped the French Revolution. A mysterious Frenchman had once remarked on Rose’s similarity to someone he knew well, and she had a photograph to prove it! So, she must be French? Right?

As a child, I accepted the story until I figured out that the French Revolution was about 100 years before Rose’s time. Subsequent research disproved the De Fourier theory. The Foulgers were primarily agricultural labourers, who had deep roots in the Suffolk countryside, so no French connection. But what about the Frenchman and the photograph?

Rose was born in 1881 and went into service aged 15. She told me stories of cooking for the hunt, housekeeping for famous cricket players, and a Frenchman and a photograph. The studio photograph of 22-year-old parlourmaid Rose, dressed in her Edwardian finery was her favourite. Seventy years on, she would break into a large smile as she recalled the charming Frenchman who insisted she had her portrait taken.

Imagine my surprise, fifty years later, when I finally tracked down her 1901 census entry. There in Little London, Hampshire, where Rose was a parlourmaid, was Robert De Marylski, a Frenchman born in Versailles, cousin of her employer, Ellen Hume Winn.

Who was Ellen Hume Winn, aged 50, of independent means and more importantly who was 58-year-old Robert, and was he really Ellen’s cousin? Both their stories took me on a tour of Bengal, Gibraltar, Boulogne, Paris, and the Channel Islands, back to fortunes made in the Caribbean slave trade, and into the intimate details of a cruel and violent marriage.

If my 20-year-old Great Grandmother overheard even a small portion of the tales that were in that house in Pamber, she must have gone out into the world with her eyes wide open.

It’s never easy finding a starting point for a family tale. Although Robert is the key to the story, I’ll start with Ellen, because without Ellen, Rose would never have met Robert.

Ellen Hume Harrison was born in July 1850 to Edmund Stephen Harrison, clerk to the Privy Council, and Eliza Sophia at 9 Allsop Terrace, Kensington, London. She married civil engineer Arthur Scott Winn on 19 Jan 1876. In 1888 she petitioned for a divorce on the grounds of cruelty and desertion. In her petition, she claims that for almost two years from 1881, Arthur was continually drunk and, on many occasions, she was assaulted. One night she awoke to find him standing over her with a knife and on another, he threatened her with a gun. In January 1883 he disappeared, and the divorce was finalised in July 1888.

Arthur Scott Winn fled to Christchurch, New Zealand and then to Victoria. He was eventually admitted to an asylum in Ballarat where he died in September 1908 aged 54.

After her divorce, Ellen lived at Carlisle Place in London, and by 1901 she had met Robert, and they were living in Hampshire.

Robert De Marylski was born in August 1844 at Versailles in France, son of Jules Thomas Pierre Arthur Ostoja-Marylski (a Polish refugee), and Harriet Rowan Langford Brooke (nee Thomson), who had married in Boulogne, France in 1841. Harriett was the daughter of Waterloo veteran James Crooke Thomson and had first married William Henry Langford Brooke in 1832. William Henry, who died in 1839, was a descendant of the Caribbean sugar plantation and slave owner Jonas Langford. Harriett had one son from her first marriage, James Henry Langford, and three children by Jules De Marylsk, Arthur, Robert and Catherine.

In 1901 Ellen and Robert were living together in Hill House, a cottage outside the village of Little London, Hampshire, next door to the Plough Inn. In addition to Rose and a cook, there was Ellen’s niece Eva Harrison, aged 19. Maybe she was the chaperone. I could find no family connection between Ellen and Robert. About this time Rose had her photograph taken, but by 1908 Rose had left to be married.

Ellen aged 58 and Robert De Marylski aged 64 finally married at Westminster, London on 30 March 1909. They returned to Hill House where they remained with Eva for the rest of their lives. Robert died in 1924 and Ellen on 3 Jun 1940.

A family mystery solved? Perhaps? So, there was a Frenchman, but who did Rose resemble? I visited all the usual sources for my research, and when that information ran out, I just Googled it! In what can only be described as an astonishing find, the National Portrait Gallery, UK has digitised a collection of photographic portraits, among them one of Madame De Marylski. https://www.npg.org.uk/collections/about/photographs-collection Labelled with the date 1866, I can only find one Madame De Marylski – Harriett Rowan De Marylski (Robert’s mother). When I finally put the photograph of Harriett with that of Rose, the similarity gave me goose bumps.

The fascination of a fleeting French connection remained with my Great Grandmother for over 70 years and with me for more than 50 years. If she’s looking over my shoulder, she’ll be grinning from ear to ear. 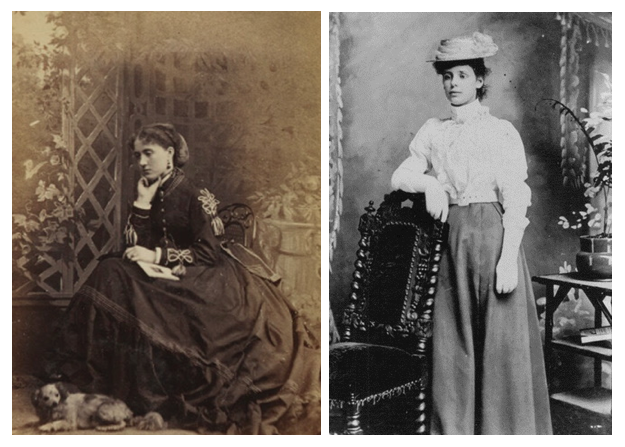 Madame De Marylski (on left) and Rose Foulger (on right)

On further investigation I found a photograph of Robert as a young man on an auction site, and elsewhere James Crooke Thomson’s medals were also advertised, along with a description of some of his military service. Keep digging. Be patient. You never know what’s out there.