How many times over the last few months have we heard the words ‘Spanish flu’? We have heard them from historians reappraising its effect on the world; health professionals who have been making comparisons with its treatment and that of COVID-19; and statisticians comparing the grim rates of death. But what was the impact on individual families and the stories that have been told within these families about this time?

My husband’s grandmother, Alida Sleewijk Visser (née Kuster), died of the Spanish flu in the Netherlands in February 1920 and he knew little of the circumstances of her death or much about her life.  We started our quest to find out more by considering what was known about her in his family, looking at old photos, reading the existing five letters she had written to her parents and sister after she married and finding records in Dutch archives which were relevant.

I had thought it would be difficult to access Dutch records because I do not speak Dutch and am not familiar with accessing these records. However, the OpenArchives website openarch.nl provides a search engine in English, French and Dutch for genealogical data of Dutch and Belgian archives. All you need to do is put in the name and use the filters to find the records you are looking for. 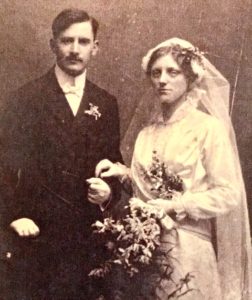 Tjeerd and Alida Sleewijk Visser on their wedding day, 9 April 1915.

Alida Geertruida Christina Kuster, or Ali as her family called her, was born in Arnhem in the eastern part of the Netherlands on 1 July 1891. Her father was Gerrit Cornelia Kuster and mother Catharina van Schaik.  Alida was their first child with their second daughter, Johanna Jacoba Kuster, born 18 April 1904.[1]

Alida attended a domestic science high school and then went to stay with an aunt in Brussels before getting a job in a gift shop in Arnhem.  On 9 April 1915, aged twenty-three she married Tjeerd Sleeswijk Visser who was a bloemist and tuinbouwkundige (florist and horticulturalist) and had a bloemenzaak (flower shop) in Den Bosch (’s Hertogenbosch) about sixty kilometers south of Arnhem. They lived in a small town called Vught about six kilometers from Den Bosch and her young sister loved to visit Alida and Tjeerd because they would have many friends visiting and it was always heel gezellig (very cosy).[2]

On 26 November 1916 Alida wrote to her mother, firstly wishing her a happy birthday and then giving her an update on the preparations she was making for the birth of her baby saying ‘  … it would be nice if it is a little girl because she can wear it [the clothing] for a long time.’  On 8 December she wrote again saying that ‘Upstairs everything is ready … the 2nd of January the sister [midwife] comes and the quicker it all happens the better because every day costs a lot of money.’ She went on to explain that although they had a cradle downstairs, they were doing up an old rocking cradle from Tjeerd’s family which she was going to leave in the bedroom upstairs so they did not have to carry the cradle up and down stairs. Catharina Slesswijk Visser (shortened by her mother to Ini and Ina) was born on 4 January 1917 and named after her maternal grandmother. 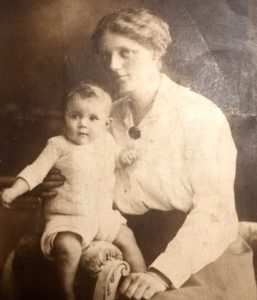 Alida Sleewijk Visser with her little girl, Ini, about mid 1917.

Ini’s birth must have been a joyful event for the whole family but it was an unsettled time in the Netherlands. The country had remained neutral during the First World War although food had been scarce. During 1918 the Government became focused on social unrest caused by the revolutionary ideals brewing in Russia and the decision to grant asylum to ex Kaiser Willem II, the German Emperor, after he abdicated the throne in Germany. The first wave of the Spanish flu took hold in the Netherlands in July and August 1918 and no state of emergency was declared and the government’s response was to increase bread rations in November to improve, apparently, the resilience of the population.   The numbers of deaths were worrying enough but the speed with which the disease spread and its effect on all age groups, particularly pregnant women, was frightening.

…the sickness moved at lightning speed, corroded the lungs and in a couple of days, sometimes in a matter of hours, dragged the young life to the grave … Afternoon hospital arrivals died at night. One after another, dozens in a week.[3] 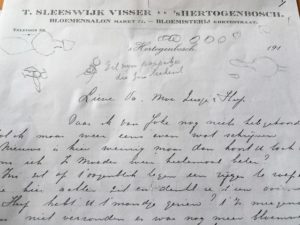 Letter from Alida Sleewijk Visser to her family with Ini’s drawings of little puppets at the top.

A letter from Alida (undated) to her family in Arnhem included Ini’s drawings of little puppets. The letter was probably written in January 1918 after Ini’s birthday as Alida explained that they had just eaten some special food left over from her birthday. Alida also told her family it had been so cold she could not take Ini outside and was looking forward to taking her to Arnhem during the summer. She added at the end of the letter ‘The little one was so lovely yesterday. Now she is so contented with her dummy that she slept beautifully through to half past nine this morning and now she is asleep again.’

The second wave of the flu lasted from October 1918 to spring 1919 and these was the deadliest months in Dutch history. There was no vaccine so the only advice was to ensure good hygiene and get plenty of fresh air. On 26 November 1919, Alida wrote to her mother wishing her a happy birthday and hoping ‘… that we may still have you for a very long time in good health.’ She had sent her mother gifts and she said ‘… the carnations are from Ini.’  She also asked if her mother would be coming for Ini’s birthday on 4 January 1920 and Tjeerd added a note at the end saying ‘Luckily with all of us everything is going well.’

But their luck did not last with the winter months bringing the terrible virus to the Sleeswijk Visser household with Tjeerd becoming ill. Alida was seven months pregnant with her second child so her mother came from Arnhem to help her daughter take care of her husband and may have been there when little Ini turned three years old on 4 January 1920. Just as Tjeerd’s health improved, Alida fell ill. On 28 February 1920, after two days’ illness the doctor came to see her and her mother told him that she was so happy because Ali seemed to be getting better as earlier in the evening she had asked for a cup of tea and a rusk. The doctor went into the bedroom to see her and returned with the terrible news that she was dead.[4]

Alida was buried in the cemetery at Vught. The family was shattered by this terrible experience and there were many ramifications. Alida’s sister, Johanna, was so upset that she stopped going to school at the age of 16. Soon after Tjeerd sold his business and left for the Dutch East Indies to find work as a planter, as many young men did at this time, as the Dutch economy was not doing well.  He left Ini with his brother’s family and she joined her father in the Dutch East Indies a couple of years later when he married, Johanna Vrij, who had worked in his flower shop in Den Bosch. Tjeerd tragically was murdered on 2 March 1942 at the time of the Japanese invasion of the Dutch East Indies.

Ini married in 1938 and in 1942 she and her two children were imprisoned in a Japanese prisoner of war camp. They survived and after the war the family lived for a short time in the Dutch East Indies (Indonesia) and then in the Netherlands which they found too cold and crowded.  So in 1958 Ini and her husband and their now six children migrated to Australia.

The Spanish influenza was a dramatic but almost forgotten period in history until this year.  However, it was a terrible time and its effect on one family in the Netherlands is an example of what millions at the time endured and what so many families are enduring now.