It started with a note, a small, white piece of what looked like scrap paper, with handwriting that seemed slightly familiar but we couldn’t quite place.  The note was a short recollection of my great grandfather’s life, telling us of family interaction in Scotland and the people he met on the voyage out to Australia.  Most tellingly, this short, seemingly innocuous document, called into question his maternity. 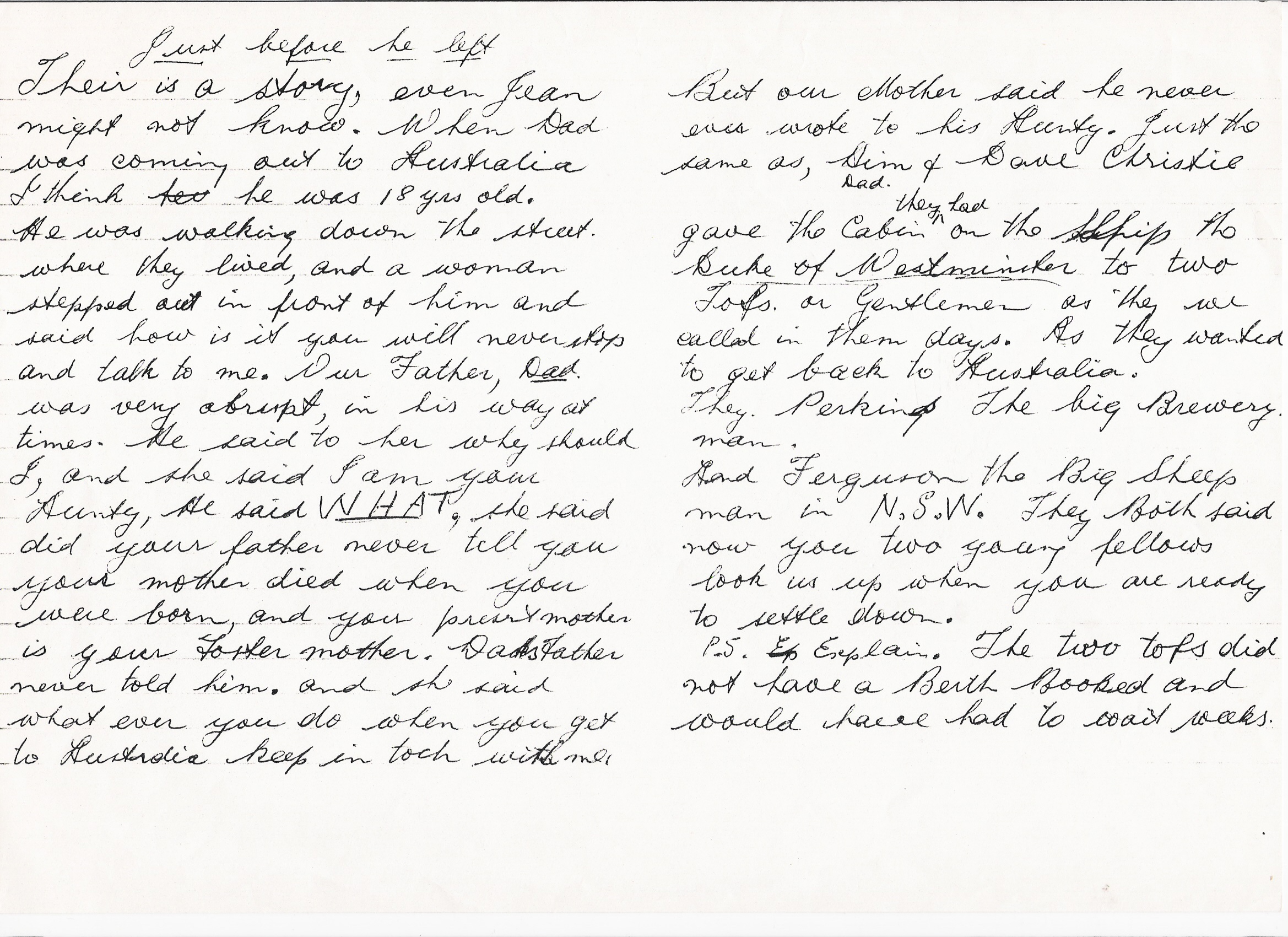 I had heard stories of my great grandfather James’ parentage for what seemed like decades.  There were whispers, “We don’t know who granddad’s mother was.”  “Mum used to write to the Becks in Scotland.” I would be told.  Partial answers and “I don’t knows sweetheart!” spoken with emphasis, a sigh and an almost immediate change of topic.  The questions I asked were met with, “I’m just not sure.  If Uncle George was alive today, he might know.”  So this mystery, this uncertainty, of our ancestor’s parentage remained in the back of my mind; one of those aspects of my heritage that I was determined to fully flesh out but on which I never seemed quite ready to concentrate.

But then, after a change in focus from my paternal heritage to my mother’s line, I began to think …What did we know about this Scottish man about whom my mother had just one memory?  While visiting his family in Chinchilla in the early 1940s James took his grandchildren to the pedestrian bridge that spanned the railway line running through the town.  They were enveloped in steam while he told the littlies about the trains whooshing by beneath them.  James Dickson emigrated to Australia on the Duke of Westminster in 1898 as a 25 year old single man.  He disembarked at Townsville and spent the rest of his life in regional north Queensland.  He married, fathered 7 children, and worked as a miner, labourer and lengthsman on Queensland’s Railways.  Living his later years, dying and being buried in the town of Yeppoon, there is no marker on his grave even today.

This left us with this one nagging question, “Who was your birth mother, James Dickson?”

We had two names to choose from; Agnes Lawson named on James’ birth and death certificates and Helen Beck on his marriage certificate.  “What are the possible scenarios?” I asked myself.  Death, divorce or separation, overseas service, military or otherwise?  Did the family experience life events that were tragic, traumatic?  Were their choices wise and beneficial, for all family members or less than honourable, causing emotional and relational harm to those involved?  These and other value based questions were running, or more accurately stampeding, through my brain … and then … while sitting at the computer, thinking about James’ life in Australia and how I might answer the questions posed by my family’s comments, and the different names on his BDM certificates, the words, “He was Scottish!” exploded in my mind.  “He was Scottish” and within seconds I was checking records on Scotland’s People.  Three quarters of an hour later the mystery was no longer, the uncertainty regarding James’ parentage resolved.

Thanks to Scottish Registers of Births, Deaths and Marriages, we now know that James’ father John and the woman named on James’ birth and death certificates, Agnes Lawson, married in 1871.  A girl, Christina, was born and died in 1872 and James was born in 1873. Barely months after welcoming his son into the world, John lost his Agnes to Gastric Fever.  A marriage registration showed me that John remarried in 1880 and went on to have six children with Helen (Ellen) Beck.  The 1901 Scottish census shows the little family based in the area of East Lothian, Scotland and the children’s ages, including the gaps between each, clearly evidenced the timeframes of the life events John and James experienced.  Records on Ancestry.com, Find My Past and the International Genealogical Index 1988 and 1992 editions, support the information on Scotland’s People and the census.

So in the end the answer to the question, “Who was your mother, great grandfather James?” was a very simple one.  His birth mother was Agnes Lawson and his stepmother, the only mother he probably remembered, was Helen Beck.  “It was a second marriage” my mother had stated with confidence many years previously.  Her comment prior to me even starting this research task, proving slightly prophetic or at least astute.

For Births Deaths and Marriages Downloaded from ScotlandsPeople.gov.uk Dec 2019