Killyleagh village on Strongford Lough, Co. Down. Photo by R.Edes

My Irvine ancestors set out from Killyleagh, a beautiful village in County Down, situated on the shores of Strangford Lough. This story aims to tell you a little about the history of the area and the senior members of the family.

Although the village was settled in the 12th century, it was in 1602 that the Scots-Irish influence began. At this time the Gaelic chieftain Con O’Neill of Clandeboye owned much of North Down, including Killyleagh. O’Neill had sent his men to attack the English soldiers but ended up being imprisoned by them. His wife made a deal with Scots aristocrat Hugh Montgomery to give him half of their land if he could secure a royal pardon for her husband. This Montgomery did but James 1 divided the land into three with Killyleagh and the region north allocated to another Scottish land owner, James Hamilton, who later became the 1st Viscount Clandeboye.[1] Dunlop is just to the north of the town of Irvine on the Ayrshire coast and this is where Hamilton grew up. He was Bursar at Trinity College in Dublin from 1598, and it is noted that during his tenure he established a school in Killyleagh. 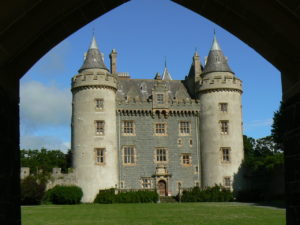 Killyleagh Castle – home of the Hamilton family for over 400 years. Photo R.Edes

This was before the Plantation of Ulster, and the two Ayrshire Scots – James Hamilton and Hugh Montgomery pioneered a massive migration from the Lowlands of Scotland to County Antrim and County Down. Beginning in May 1606, over ten thousand, mainly Presbyterian Lowland Scots who were members of their extended families, arrived to form the Ulster Scots settlement. The initial settlements were Donaghadee, Newtownards and Bangor, and later included Greyabbey, Comber and Killyleagh. The smaller tenants who came across were granted portions of these lands, usually in amounts of between two and four acres each, at a price of 1 shilling per acre each year. Their success inspired King James 1st’s Ulster Plantation of 1610.[2] & [3]

The new arrivals first task was to build cottages and booths out of sods and saplings, then the soil was tilled. By 1622 Rev John Bole had been appointed the Presbyterian Minister at Killyleagh.  In 1630, there were about 2,700 Scottish males on these two estates in County Down.[4] There were nine Irwin names recorded as tenants of Lord Viscount Claneboye at this time, with none recorded in the Killyleagh 1630 muster rolls.  These rolls consisted of males bearing arms who were aged between 16 and 60 years, however there were two in neighbouring Killinchy.[5] In 1688 there were four Irvine families listed as Hamilton’s tenants in Killyleagh town and parish.[6]

The parish registers of the 1st Presbyterian Killyleagh congregation record events with both James Irvin & Thomas Irvin having children baptised and buried there from 1693 and their descendants continuing to worship there. Unfortunately, the books for the period from 1757 to the mid 1830s are missing and there are no substitutes available.  At various times the surname was spelt Erwin, Irwin, Irvin and Irvine in the parish registers, our line has used the spelling of Irvine consistently since the 1880s.

This 77-year gap is a vital period as during that time our earliest confirmed ancestor in this line, Francis Irvine was born. His tombstone puts Frances’ birth year at about 1776 and his wife Jane’s birth year around 1780. Jane’s maiden name was Cain/Kane and she was likely from the townland of Raffrey in Killinchy Parish. Francis, who was a farmer, and Jane Irvine are my 3xgreat grandparents. 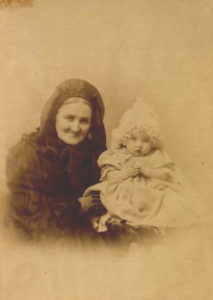 Sarah Irvine ms Gilmore with one of her grandsons probably Samuel Irvine cc1890.

In the Killyleagh 1st Presbyterian registers their children are noted as James who married Sarah Gilmore on 27 October 1840, his sister Sarah who married Hugh Ekin/Aiken on 27 December 1852 and Mary who married William McClurg on 28 December 1854.  I have also searched all surrounding parishes.

Francis and Jane, including his son James and his family, were recorded as living in the townland of Tullymacnous from 1840 when the church received a stipend of £1/9/4d from both Francis Irvine & James Irvine of Tullymacnous.  In the 1842-1843 pew books both Francis Irvine and James Irvine are still residing in Tullymacnous and paying 3/4d each for the year’s use of Pew 88. This continued on until the 1848-1849 collection when James is shown as living in Ballytrim townland. This townland is on the Killyleagh-Crossgar road about 2 miles from Killyleagh. The family continued to pay for pew 88 until the mid 1880s. 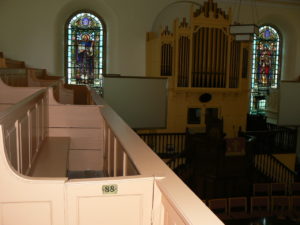 Townlands in Ireland are the smallest government division of land, several townlands make up each parish and several parishes make up a Diocese. Unlike the rest of the UK, Irish folk identified by their townland rather than a farm name and most residents (certainly in our extended family) leased their farm lots, some for ‘three lives’ ie three generations.

Francis and Jane’s tombstone at Killyleagh 1st Presbyterian reads  ‘Erected by James Irvine of Ballytrim in memory of his father Francis Irvine who died 1st January 1853 aged 77 years.  Also his mother Jane Irvine who died 7 March 1863 aged 83 years. Also his 3 sisters who died young’.[7]  I first visited the church in 2002 and at that time could not find the tombstone. Many memorials that weren’t securely upright in their original spot were lined up along the church boundary walls and many more are slowly lost forever, and it seems our Irvine one is amongst them. 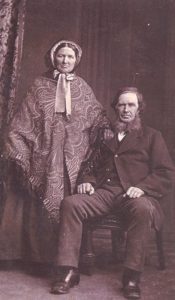 Sarah and James Irvine. Portrait by Henry G. Glen in Belfast. Taken about 1875 in Belfast.

James did not follow in his father’s footsteps as a farmer, instead choosing to be a bootmaker. From newspaper advertisements it appears that in 1868 & 1869 he supplemented his income by acting as an agent in Ballytrim for the ‘Daily Northern Whig’ and ‘Weekly Northern Whig’ newspapers.[9]

He was also a bee-keeper and won 1st Prize for 1 Skip of Honey in the Downpatrick Horticultural Society Show of Flowers, Fruit, Vegetables, budding plants etc held in Downpatrick on 25 Aug 1869.[10]

From 1865 the young Irvines began emigrating to Queensland, sometimes one by one, sometimes with siblings with some returning on visits or to stay for a year or so. I shall talk about this younger generation in future blogs. In 1888 the elderly couple, now in their 70s decided to make the journey with their sons and daughter who had remained behind to care for them. Another son, John returned to Killyleagh to escort them all on their voyage as 3rd class steerage paying passengers. 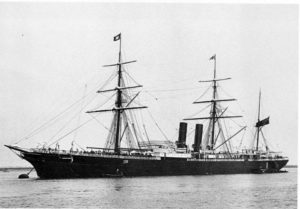 Steamer Iberia of the Orient Line.

James & Sarah settled into life with their sons William and James in James Street Fortitude Valley with James Snr passing away on 22 January 1891 and the siblings much loved mother, Sarah dying on 14 August 1896. Both are buried high on the hill in Toowong Cemetery in gravesite 13-85-7. Their daughter Sarah and sons Andrew Gilmore and Alexander Moffatt Irvine are buried with them as well as daughter in law Annie Euphemia Irvine (ms Leitch) and grandsons, David and James Campbell Irvine.[13]

Of their eight sons, two were farmers, three were bootmakers/store owners, two were store owners and one a carpenter.  Since learning about these senior Irvines I have been immensely impressed by them and their dedication to the family in making that long journey in their twilight years.