Many of us use Trove every day. The newspapers reveal genealogical, society and personal details found nowhere else. However, don’t forget that Trove is more than just newspapers, and often a full site search returns interesting and previously unvisited resources.

I have been looking into the life of Ernest Henry Craig, born in Cooktown in 1911. He eventually settled on a plantation on Samarai Island, a former administrative capital in Milne Bay Province, Papua New Guinea. The Craig family had a long association with pearl shell fishing in Torres Strait, gold mining on Sudest Island and plantations on Samarai. 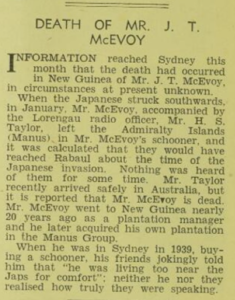 A full search of Trove for Ernest Henry Craig returned an obituary in the Pacific Island Monthly (PIM). The complete digitised set of this publication, from August 1930 to June 2000, can be found under Journals articles and data sets.

It was founded by New Zealand born journalist Robert William Robson to enhance communications between islanders and Australian expatriates, with business and family interests in Central and South Pacific Island territories and nations. It covers Papua New Guinea, Solomon Islands, New Caledonia, Fiji and east to Samoa along with many other smaller communities. Early volumes concentrated on a colonial perspective with information on administration and government, but later volumes shifted to general news, politics and business. 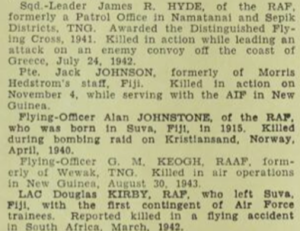 Advertisements throughout the volumes illustrate Australian and local Pacific products traded in the Pacific. Publication continued through World War 2, often presenting a unique perspective on military events in the Pacific.

One Roll of Honour from January 1944 lists the names of residents or former residents of Pacific territories whose names appeared in casualty lists, often accompanied by interesting biographical information.

In January 1942, in anticipation of a Japanese invasion, the British outpost of Samarai Island was evacuated, and many of its wharves, buildings and warehouses destroyed. The PIM provided details about Ernest Craig’s return to Samarai in 1947 and the state of his plantation. 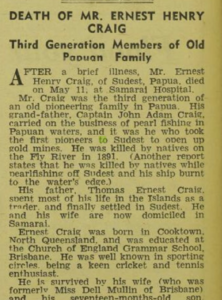 When he died suddenly in 1948, his obituary, which did not appear in Australian newspapers, provided a rich source of family history clues.

The National Library blog post from 10 March 2017 entitled “An outstanding resource for Pacific studies”, which has provided most of the background for this post states,

“PIM is an unrivalled source of information about current affairs, agriculture, transport, communications, local people and their life and customs, commodities, geography, climate, mining, sport and much more. PIM is also a wonderful means of tracking down elusive names, or seeing the emergence of particular people as they became important in island politics, business or society.”

Visit the blog post to read a detailed description of the resource.

Scroll down to find search hints. They begin with the instructions for browsing all issues.

“go to the Journal, articles, data sets zone in Trove and enter “pacific islands monthly” in the search box. The digitised version will be the first record on the list. Click on the View Online link, then on Browse this collection and all the issues will be displayed in batches of 20 per page.”

Through the shipping and passenger lists, I was able to track the family’s return to Samarai Island after the war. Other members of the Craig family regularly moved between Cooktown, Brisbane and Papua New Guinea. GSQ has another valuable resource for Papua New Guinea, the CD, Genealogical Index to Australians And Other Expatriates in Papua New Guinea, which provided further family history information.

Pearl-shell fishing, gold mining, shipping and trade drew Australians well beyond our borders. Territorial outposts and trading ports were regularly visited. Don’t forget to look for those missing ancestors out in the blue Pacific.