An old, yellowed, typewritten letter resurfaces and creates a context to wrap around a family tree and some photographs

I’m always surprised, pleasantly of course, by who responds to the private family album invitations I send. There’s certainly no formula to it, no pattern, no particular demographic, but there’s always been an enthusiastic, almost giddy interaction by those who come back to me, those who leave comments and share stories, just seem to get it.

A few cousins accepted almost immediately, and left terrific comments, and shared some long-forgotten memories. Some of those interactions have touched me deeply and profoundly. But a simple letter… takes first prize.

Several months had passed since my initial call out to relatives to come and have a look at my family album. Then a month or so later, I heard from my eldest niece. 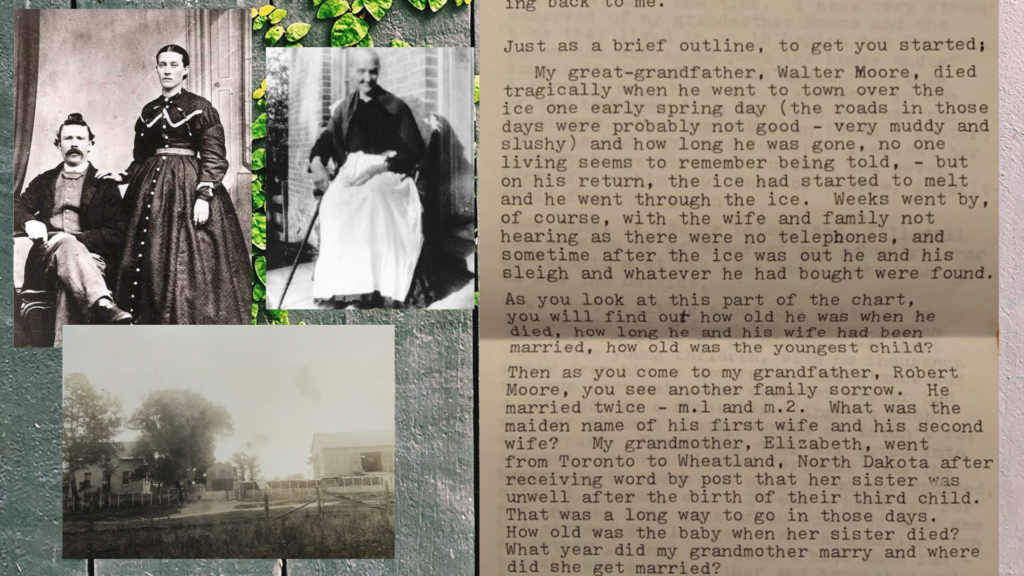 The storyteller who typed this letter just happened to be my mother; she was 76 at the time of writing it in 1996. She’s relaying some information about her ancestors to her granddaughter and rolling out story after story about people only she knew.

My mother wasn’t an historian, not the keeper of any family heirlooms or documentation, but she knew things. Things that needed to be written down. I believe her true motivation was to inspire my niece to look back in time to her ancestors for teenage guidance and internal strength, as grandmothers often do.

My mother knew these stories needed (and wanted) to be shared, so along with a faded family tree that had been researched and prepared by Mom’s cousin (my 1st cousin, once removed) and some saved photos, and the letter, she did just that. She asked my niece to engage, to seek out the answers hidden in plain sight.

The stories were of extreme loss and heartache. Tragedy and sacrifice.

My 2-x great grandfather, Walter Moore, died in terrifying circumstances at the age of 33 on a return journey to town after getting supplies. He didn’t return. Weeks went by with no word from him.

It was early spring and he, perhaps thinking it quicker, chose a route that took him, his sleigh, the supplies, and horse out over the ice covered lake. I was only ever told that Walter drowned. It’s all I knew, until the letter filled in the details for me.

How absolutely terrifying it must have been for Walter. The sound of the ice breaking, the horse thrashing about, perhaps making the situation worse by pulling the sleigh deeper, and then the realization that he was surely going to die and never see his family ever again. He may not have even known that his wife, Mary Ann Shier, my 2-x great grandmother was pregnant with their 5th child at the time.

They had married on January 15, 1845, in London Ontario. Both were Irish immigrants, and sadly were only married nine years. Mary Ann never remarried, raising her five children on her own and remained on the family farm in Bervie Ontario and died at the wonderfully perfect age of 92 on April 7, 1918.

In 1885 Robert had found his way into the United States of America. He married Lydia Walsh in Casselton, North Dakota, on February 25, 1885. Fargo in the Dakota Territory would have been a harsh, unforgiving place in the wintertime. Two of their three children were born in the cold, damp, and isolated Dakota Territory winter. Lydia dies just 10 days after she gives birth to their 3rd child, a daughter, in the harsh North Dakota winter on February 5, 1891.

One can only imagine what may have happened. Lydia may have been on her own for the birth, no one but Robert to help her. Clearly, something went terribly wrong, and my great grandfather was now alone with two children under 6 and a newborn, in a sod hut in the middle of the Dakota territory.

Elizabeth Walsh (my great grandmother), Lydia’s younger sister, got the desperate message to go and help poor Robert with his children. Being an unmarried woman of 34, she didn’t hesitate, and made the arduous journey to barren North Dakota.

Two years later, Robert and Elizabeth married on March 22, 1893. They had two children together. Jennie, born May 5, 1894, in North Dakota, and my grandfather Clarence Moore, born August 21, 1896, in Canada. The Dakota Territory chapter for this family story ended at some point around 1895.  Robert died on June 7, 1902, in York, Ontario, Canada, at the age of 52, and was buried in Toronto. My great grandmother Elizabeth becomes a widow at the age of 45 and continues to raise her sister’s three children and her own, relying on the generosity of two of her sisters.

I doubt that my niece ever answered any of her grandmother’s questions, but she did keep that letter for 25 years. Now in her early 40s, and with me giving her a gentle nudge, she’s interested in sharing — and adding to—our family story.

This letter, typewritten in 1996, complete with pencilled-in typo corrections, is an actual part of the story. In digital form, it gives the photographs context. It may not be my mother’s audible voice, but it is most definitely her visual voice. 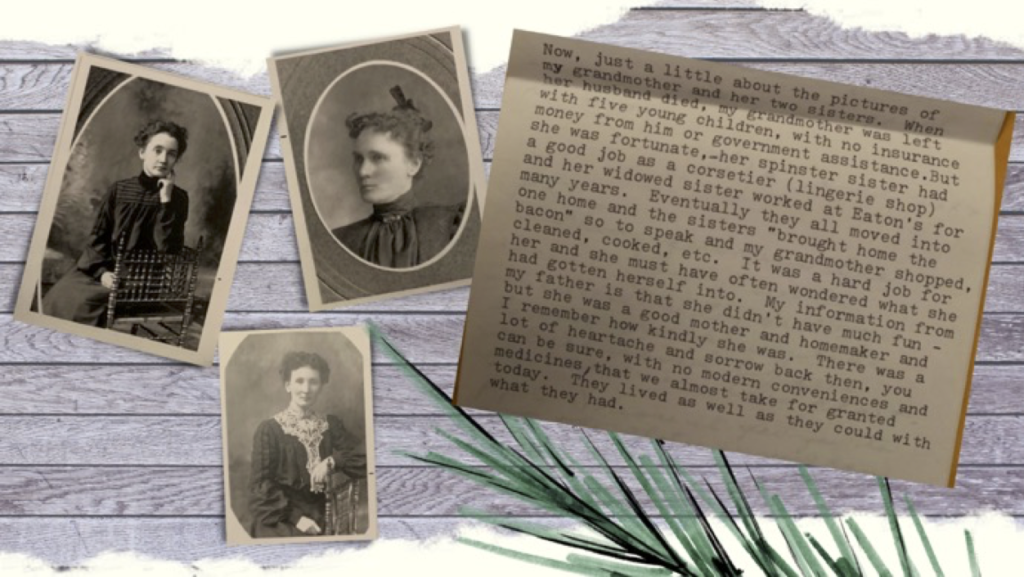 This is my mother through and through, it sounds just like her, and is an incredible addition to my growing private family album. The addition of more letters is something I am looking forward to.

Stories are told in so many forms. I share my family stories and family tree through photos, voice recollections, documents, links to external sources, and those all-important letters written by people who no longer can tell the stories themselves in person.