When a fellow researcher shared a death transcript for my third great uncle, Andrew George Lee, I noticed that his occupation was listed as “railway guard” and thought “well that’s different to the usual farmer, carpenter or labourer” and filed it away for later. 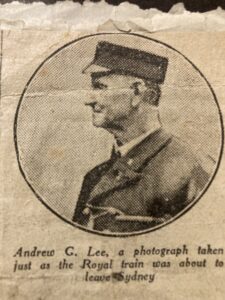 Andrew George Lee taken as the train was about to depart Sydney.1

Recently though, when I began looking at the Lee family in more detail, something grabbed my interest when I found his obituary on Trove. Not only was Andrew a train guard but he was at the time regarded as Australia’s longest serving guard and had been a guard on the Royal Train when the Prince of Wales toured Australia in 1920 and the Duke and Duchess of York (the future King George VI and Queen Elizabeth) on their journey around NSW in 1927.  To commemorate his faithful service as guard on the Royal Train during their visit, the Duke and Duchess presented him with a magnificent gold watch engraved with the Royal Coat of Arms. He said it was one of the proudest moments of his life.1

Edward, the Prince of Wales, visited Australia as a representative of his father King George V to pay his respects to the Australian people for their sacrifices and support of Great Britain during World War 1. While in New South Wales he spent time in both Sydney and regional areas. In Newcastle he launched a 6000 ton steamer and visited the BHP steelworks. He also toured the developing city of Canberra and Duntroon Military College which had been founded in 1911.  The Duke and Duchess were primarily in Australia to open the newly built Parliament House in Canberra, home of the new Federal Capital. Extensive visits were undertaken throughout New South Wales, the ACT, Queensland, Victoria, South Australia, Western Australia and Tasmania by both the Prince and the Duke and Duchess.

Having arrived on our shores on board the battle cruiser HMS Renown, the Royal visitors toured much of the country by trains provided by the various state railway operators; these were known as the “Royal Trains”.  Royal Trains with specially fitted out carriages set aside for the purpose, generally operated with two locomotives to minimise the chance of a train being stranded should one of the locomotives fail. A third locomotive usually went ahead of the train to ensure the track was clear. A headboard with the royal coat of arms was attached to the front of the leading locomotive.  To the rear of the train was a viewing platform which enabled the public who often lined the route, to see the Royal visitors.2 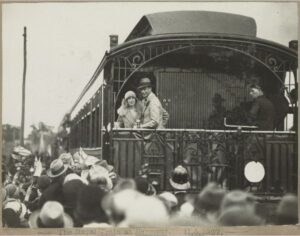 At the time, railway gauges varied from state to state preventing the completion of the entire journey by the same train. During the 19th century, each of the Australian colonies had adopted their own railway gauges. Following Federation in 1901, and the removal of trade barriers, the problems resulting from having three gauges became apparent. It would, however, be a further 94 years before all mainland state capitals were joined by one standard gauge.4

Following their visit to Queensland by train, the Duke and Duchess boarded a steamer at Coolangatta where they were conveyed to Murwillumbah to rejoin the Royal Train on which Andrew was guard, in order to return to Sydney. 5

Andrew George Lee (aka George) was born the 11th child and youngest son of farmer William Lee and Jane Gill in the Manning District of New South Wales on 21 December 1859 and was brother to my 3 x great grandmother Sarah Sophia Lee.  He married Lucy Mahalia Ward in Blayney, New South Wales in February 1881. Together, Andrew and Lucy had a family of 6 daughters and 2 sons. Lucy predeceased him by 2 years.

Andrew joined the New South Wales Railway Service at the age of 20, in Orange.  Such was his passion for his work that he applied for and was granted an extension to his employment when he was of retiring age. He was said to be “wrapped up in the railway service”. This devotion to the railways resulted in a total 48 years of dedicated service. It seems fitting then that he was given the honour of performing the duty of guard on the Royal Trains. 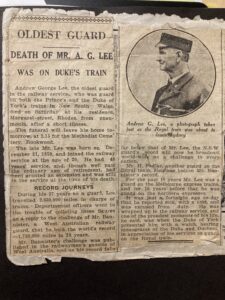 Oldest Guard. Death of Mr A. G. Lee was on Duke’s Train1

Andrew Lee’s service included 10 years performing guard duties on the Melbourne Express trains and 16 years on those travelling to and from the Queensland border.

Andrew was recognised as holding the record for the most miles travelled by any guard around the country, having amassed an impressive 2,030,000 miles during his service! A Mr Bannister of Western Australia had challenged that he had held the record… a “mere” 1,730,000 miles in his 10 years.

Sadly, just 2 weeks after the departure of the Duke and Duchess from Sydney, Andrew took ill with a heavy cold, and was excused from duty. He subsequently developed pneumonia which led to his unexpected death at his home in Rhodes, Sydney on 30th April 1927.1

News of his death and achievements was reported far and wide across the country. I counted 25 newspaper reports in Trove, from Mackay’s Daily Mercury in the north, The Melbourne Herald in the south and the Daily News Perth in the West and everywhere in between.

Andrew’s well attended funeral was conducted by Lieut. Colonel Bickerton of the Salvation Army and he was interred at Rookwood Cemetery with his wife Lucy on 3rd May 1927.

Following Andrew’s death his regulation departmental pocket watch, which had accompanied him on his many journeys, was returned to the Railway Service as per regulations, along with his flag, lantern and uniform. 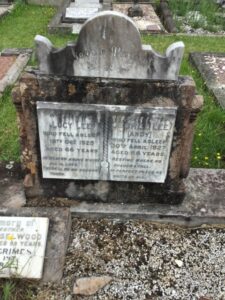 His service watch was “…just an ordinary watch; a silver watch, battered and weather-beaten – just an ordinary, honest hard-working watch.” The family were allowed to keep the newly presented monogrammed gold watch however, despite his son Hector making application to keep the plainer, battered timepiece as a treasured memento of his dear father, it was not meant to be. He even offered to buy the watch but his application was denied.  In a reportedly beautifully typewritten letter, Hector was informed that although his “late father had not been in possession of the watch sufficiently long to justify the suggested transfer.  The Commissioners therefore regretted that they could not accede the request”.7

Apparently, despite Andrew having been recognised as the longest serving guard, his 48 years of devoted service was not deemed long enough! Bureaucracy at its best!