As we move into our third year of the Covid 19 pandemic, I have been thinking a lot about my English Midland ancestors who lived through many epidemics of cholera and smallpox. In fact, it is extremely lucky that I am even here writing this guest blog post. 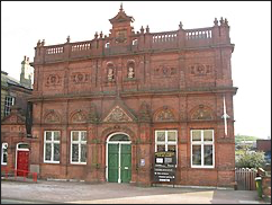 In August 1832 my 4G grandparents both died in Wednesbury, Staffordshire in the cholera epidemic that swept the Midlands that year. Edward Brookes aged 42 years and his son Elijah aged 14 years both died on 12 August. Ann Brookes, who must have nursed her husband and son died two days later.

From the 1842 census, we know that the two youngest children Isaac and Thirza lived with their sister Eliza and her husband Daniel Silk, and their two children John aged 6 years and Ann aged 5 years.

Daniel and Eliza Silk went on to have eight children and there are many descendants today, including me.

How can you find out more about epidemics in the places where your ancestors lived? In my case the clue was that three members of the same family died within days of each other. Digitised newspapers are wonderful and a quick keyword search on Wednesbury and filtering down to the date August 1832. Once I knew it was cholera, changing the keyword search to cholera turned up many more results.

The Staffordshire Advertiser on 18 August 1832 reported:

The number of funerals was six on Wednesday, and two on Thursday. We understand that cholera is rather on the decline at Wednesbury and Westbromwich.

Ann Brookes was buried on 14 August 1832 which was the Tuesday before the report. It appeared that the Brookes family lost their lives towards the end of the epidemic. 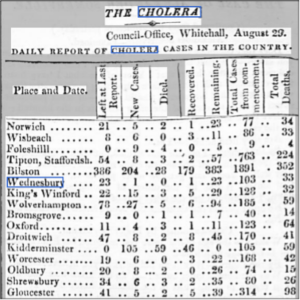 Albion and The Star 29 August 1832 via British Newspaper Archive.

The Albion and The Star on 29 August 1832 published a report of all the cholera cases in the country. The table indicated that Wednesbury had 103 cases of cholera and 33 deaths to date. This made me wonder if the Brookes children, including my 3G grandmother Eliza, had also had cholera but recovered?

The statistics for that August 1832 report are like what we have today with Covid reporting. There were 1051 new cases that day, total cases to date were 27498 and sadly there had been 10375 deaths. That’s almost 1 in 2 deaths.

What is cholera? It is a bacterial disease usually spread through contaminated water. It causes severe diarrhea and dehydration. Left untreated, cholera can be fatal within hours, even in previously healthy people. Thankfully modern sewage and water treatment plants have virtually eliminated cholera in industrialised countries. 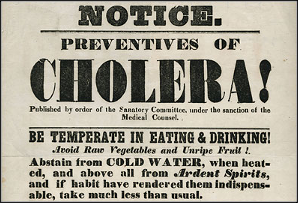 Handbill New York City Board of Health 1832 via Wikipedia.

Wikipedia https://en.wikipedia.org/wiki/Cholera_outbreaks_and_pandemics reports that there have been seven cholera pandemics (not the smaller epidemics) in the world in the past 200 years killing almost 40 million people. The American health advice below advocates a temperate lifestyle with no raw vegetables or unripe fruits. None of that would have helped someone suffering from cholera.

In August 1882, 50 years later, there was a smallpox epidemic at Wednesbury. In the newspaper report below, 51 new smallpox cases were reported and of them, 20 were parochial. The medical officer was pleased to say that revaccination ‘was being pursued with greater energy’.

Sound familiar? History repeats, we just have to learn her lessons. 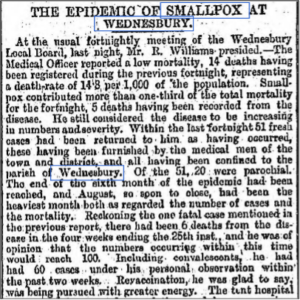 What is smallpox? It as a serious contagious disease caused by the variola virus.  Symptoms included a distinctive, progressive skin rash, fever, headache, severe fatigue, severe back pain, possibly vomiting and overall discomfort. In 1980 the World Health Organisation declared that smallpox had been eradicated. Like many others, I still have the small vaccination scar on my left arm.

These two examples from one parish in Staffordshire easily demonstrate how our ancestors would have been impacted by almost annual epidemics of one disease or another. Poor water, lack of sewerage, insufficient food, poor diets and crowded conditions probably meant there was no escaping disease. If you haven’t already explored the health of your ancestors over the generations, perhaps it is time to have a look. Good luck.