Between 1855 and 1872, six daughters were born to an impoverished Irish family. Five of these sisters left Ireland and made their way across the world with three emigrating to Australia (one returned home to Ireland after 13 years away), two to the United States of America while the sixth sister remained in Ireland.

These young women were born in County Carlow (Irish: Ceatharlach, meaning place of cattle) which lies in the south-east of Ireland and is 84km from Dublin. Carlow is the second smallest of the Irish counties and is surrounded by five other counties – Kilkenny, Wexford, Wicklow, Kildare and Laois.

This story begins with the marriage of the parents of the six sisters. On the 13 August, 1855, James Lowry (also spelt at various times as Lowery, Lowary, Lourey) married Anne Walsh (also spelt as Welsh). They were married in the Church of St. Lazerian, built in 1793, in Ballinkillin (Irish: Baile an Chillín, meaning town of the church). 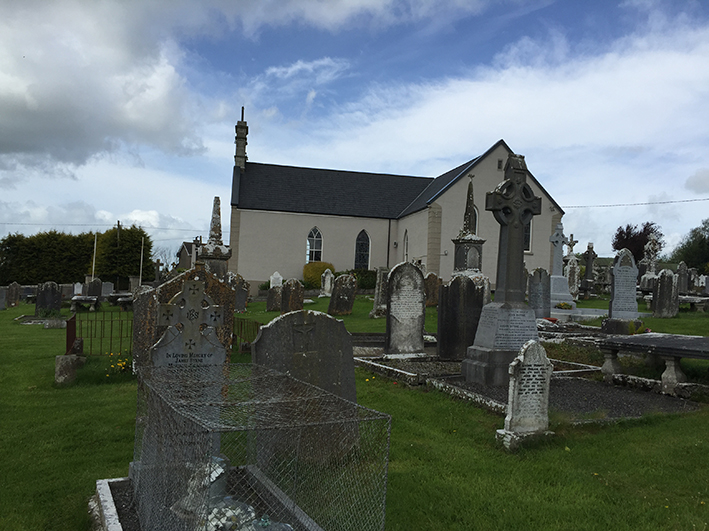 Ballinkillen is a small village about 8 kilometres south of Bagenalstown off the Bagenalstown-Borris road, nestling under the shadow of Mount Leinster. In the village churchyard, are the gravestones of the parents of the late Cardinal Moran, who was the Pope’s representative in Australia from 1884 until his death in 1911, and Theresa Malone – the 1798 heroine of the “Battle of Kilcumney”.

James was born around 1835 so he was approximately 20 years of age when he married while Anne Walsh was aged about 18. James was a railway ganger and possibly worked on the extension of the rail line which was originally designed to go through the Barrow Valley to link Dublin via Bagenalstown to the south–east ports. Work on this line commenced in January 1855. James and Anne Lowry were to have seven children, all females, with one dying as an infant.

By 1855, when this story begins, Ireland had lost almost two million of its people to starvation, disease and emigration because of the potato famine.  In 1845, blight hit the potato crop, the staple food of the Irish diet, but the dire effects of this disease were not felt until the following year. By the end of 1846, more than half of the crop in County Carlow had been destroyed and people were dying of starvation.  By 1847, the Carlow workhouse had 1500 inmates. Worse was to come in 1849 when cholera swept Ireland with over 30000 deaths recorded for the country.  Between 1841 and 1881, a period of 40 years, the population of County Carlow was almost halved.

Those who could do so left on the so-called coffin ships to the USA and Canada, with smaller numbers embarking on the long voyages to Australia and New Zealand.

The first of the sisters to leave Ireland was Catherine (Kate). In the 1881 England census, aged 24, she was living in Hammersmith, London, working as a domestic servant, like so many other young Irish women. It is likely to have been Kate’s income, sent home to her family, which enabled Alice, aged only 16 to travel from her home in Ballinkillin to Glasgow to emigrate to Australia on the Scottish Knight in 1882. A few weeks after Alice’s arrival into Mackay, Queensland, she was followed by her sister Bridget, aged 19, and Bridget’s husband John Aylward. The voyage for Bridget on the Mairi Bhan would have been especially difficult as she gave birth to a son on the ship.

Within a year of arriving in Mackay, Alice married a young Dane, Rudolph Boese, giving her age as 21 when in reality she was only 17. In 1885, Alice and Bridget were joined by a third sister, Anne and her husband James O’Neill and their infant daughter.

It was to be another five years before another of the sisters left Ireland – this was Catherine who emigrated to America in 1890. She was followed in 1893 by the youngest daughter, Theresa, who had married James Murphy in Ireland in 1892, giving birth to a son in New York in 1894. By 1897, James had died so Theresa sent her son John back to Ireland to live with his Lowry grandparents – he did not return to America to live with his mother until 1907, following the death of his grandmother.

The sister who remained in Ireland was Elizabeth, the second youngest. She had married John May (Maye) in 1889 and was to have 11 children, most of whom eventually left Ireland and emigrated to Australia or America. 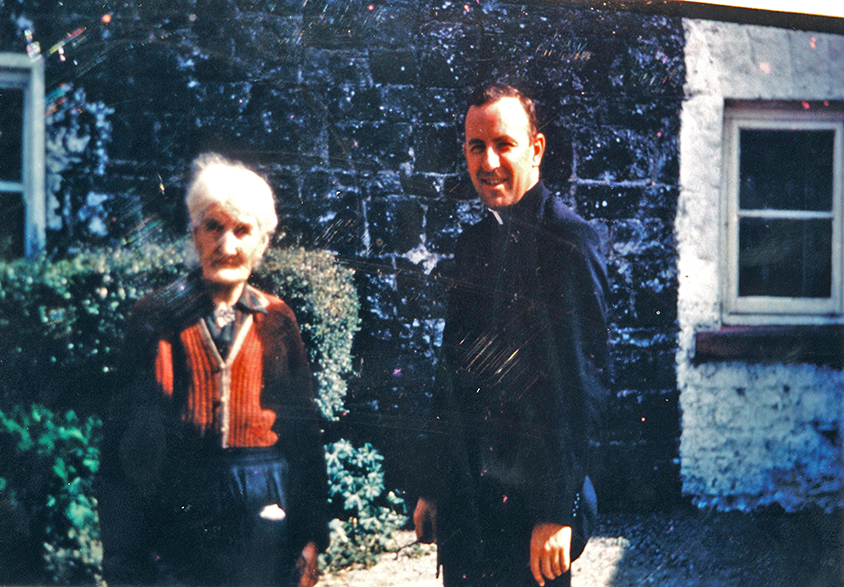 The photo shows the Catholic parish priest, Fr Sheeran, of Farleigh near Mackay, with Elizabeth May in Ireland in 1961.  Fr Sheeran was the officiating priest at the author’s marriage in 1978, as he was later based at Finch Hatton.

So what were the lives of these six women like? I often wonder if they had turned out in the way they hoped they would.

The parents of the six sisters lived at Slyguff, County Carlow, near their daughter Elizabeth, until their deaths – James in 1902 at the age of 70 and Anne in 1907 at the aged of 79.

These women lived their lives in much the same way as many others who left Ireland for what they hoped would be greener pastures.  I have often wondered if Elizabeth, the sister who stayed behind, was perhaps the most content out of all of them. She would have been a blessing to her parents, looking after them in their old age but she must have also felt the loss of the children who emigrated. Out of her nine children who grew to adulthood, four sons emigrated to Australia, one son and two daughters went to America, while a son and daughter remained in Ireland.

There was obviously a strong bond between these six sisters, which was not broken by the distance between them. Numerous photos and postcards went back and forth between Australia, Ireland and America and were kept by Alice Boese in Australia and by Elizabeth May in Ireland.