Jill Ball has set a January challenge on GeniAus for a yearly blog to Accentuate the Positive, this is my 2019 effort. The challenge has 20 set points to cover (or amend etc).

An elusive ancestor I found was – on the maternal side of my Webster ancestry. Finding Hugh aka Heugh (Elder) Frazer who married Jannet Baverage on 31 July 1702 in Wemyss Parish in Fife thus extending this line to my 7th great-grandfather.[1]

A great newspaper article I found was – a short obituary in the local newspaper regarding the death of my 3xG-Grandfather. ‘At Loughborough – On the 14th Ult. aged 39 years Mr. James Powell, lace-manufacturer, leaving four orphans.’[2]. After reading this obituary, at least I had a clue that  James’ had four surviving children. 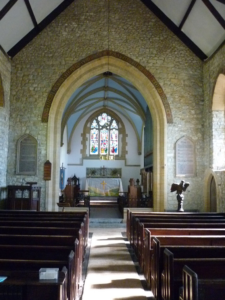 Inside All Saints parish church in Chardstock, Dorset, England

A geneajourney I took was – a three-month long trip around UK in August, September, Oct and early November researching at three archives. I also visited many friends and relatives scattered around the country in between researching and conferences.

I located an important record – well, lots of them actually. I accessed the registers of one of my ancestors’ locations, a very small village in Dorset. I think of the 500 or so odd baptisms, marriages and burials notated the vast majority may be from the early 1600s couple and so are possibly members of my extended family![3]

A family member shared – Scans of a sealed original Marriage Bond she holds dated 4 Sept 1852. The Indenture was between Henry Powell of Ohio and Susan his wife formerly Susan Berrall of the one part and Thomas Powell, Gentleman of Portman Place, Edgware Road and Charles Berrall of the same place, Gentleman, of the other part.

A genea surprise I received was – lots of friendship and support from my geneamates during what could have been a very difficult year of adjustments following the death of my hubby not long before our 50th anniversary.[4]

My 2019 social media post that I was particularly proud of was – my GSQ Blog on William White, my great-grandfather.[5]  William is one of my favourite ancestors as he had the forethought to write a great memoir of his life during his senior years. He also kept a daily diary and one of my Dad’s cousins lent that to me a few years back to transcribe. Both those documents plus research formed the basis of my GSQ blog on 5 August 2019. 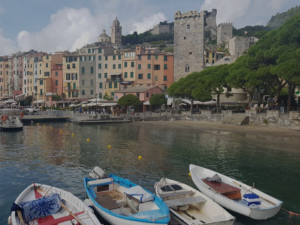 I made a new geneamate – well, three new geneamates actually. Mia (Amelia) Bennett, Sue Swalwell & Sam (Samantha) John who all attended the Unlock the Past Med cruise I was on as well as Rootstech. Mia and Sam were also at the MyHeritage conference.

I joined – the Society of Genealogists whilst in London attending their Open Day. I followed it up with two further visits during that stay. This place is genea-heaven, hopefully I will get back to visit again in the future.

A genealogy education session or event from which I learnt something new was – Gosh, where do I start. I attended many presentations during 2019 with all of them extending my genealogy education in one way or another. My favourite presenters (in no particular order) were: – Blaine T. Bettinger, Helen V. Smith, Cyndi Ingle, Yvette Hoitink, Paul Milner, Mia Bennett, Sue Swalwell, Michelle Patient, Janet Few, Diahan Southard, Leah Larkin and Roberta Estes.

A blog post that taught me something new was – Shauna Hick’s inspirational post on her de-cluttering challenge following her diagnosis with breast cancer. This blog titled ‘Preparing Your Family History Records for Hand Over in the Future’ is changing the way myself and a lot of other geneas look at their physical records.[6]

A DNA discovery I made was – on my hubby’s DNA after he’d passed away, he’d be up there celebrating this unknown ‘cousin’ as he’d done the detective work of the possibility and noted it in the person’s FTM notes. Since confirmed by original birth certificate.

I taught a geneamate how to – export her family tree on gedcom format so she could upload it in other places. I also taught two others on how to export their Ancestry & FTDNA DNA results to other DNA sites. 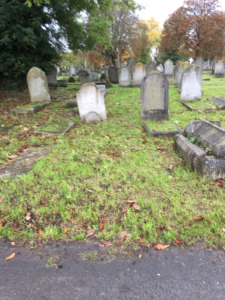 A brick wall I demolished was – finding that my 3x g-grandmother had another sister, her name and her final resting place. When visiting Kensal Green Cemetery, I first called at the office to get a map of the exact location of Thomas Powell’s grave. I thought to ask of others buried in the same grave and got a lovely surprise to learn that two of my ancestor’s sisters were also buried in their uncle’s grave lot. One was Fanny Powell who was my ‘brick wall’ mystery person and with her death date, relevant burial record plus death certificate, I could confirm her identity.[7] Kensal Green Cemetery is in London and was the first of the “Magnificent Seven” garden style cemeteries in London, consecrated on 24 January 1833.[8]

A great site I visited was – a physical one. Bonshaw Tower, the home of my Irving clan for centuries. I know this thanks to a great FTDNA project of which I am a member, as the manager of my sibling’s DNA. I wanted to visit the place my deep ancestors lived in, so travelled to the Borders region. Bonshaw is just north of Gretna Green and Chris Irving, the current Laird, showed me around the tower and explained its history. 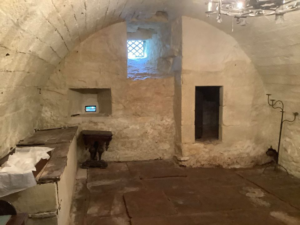 Inside the ground floor of Bonshaw Tower built mid 1500s

A new genealogy/history book I enjoyed was – One I am still reading titled ‘The Irvings of Bonshaw’. This is a short history of the Chiefs of the Noble and Ancient Scots Border Family of Irving. Compiled and published by Alastair M.T. Maxwell-Irving, B.Sc., F.S.A. Scot in 1968. I purchased this during my amazing stay at Bonshaw.

It was exciting to finally meet – James M. Irvine, the very talented study administrator of the FTDNA Irwin Clan Surname DNA project. Having corresponded with James previously I arranged to be in his local area and he had kindly agreed to spend the day with me to explain his current findings on the project.[9] This was following several BigY results (including my brother’s) becoming available and including them in his gigantic spreadsheet. Our project is indeed extremely lucky to have such a dedicated person at its helm.

I am excited for 2020 because – I’m going on the final Unlock the Past cruise to Tasmania sailing from Adelaide in March. Quite a number of my genea mates are also going on this one, so we should have lots of fun along the way as well as learning from the onboard conference presentations.

Another positive I would like to share is – the wonderful friends you make along your genea journey. Having attended the three conferences overseas, I made many new geneamates and met old ones.