The bush diggings of a goldfield would not be the ideal place to be giving birth but that was the situation faced by many women in the early days of our Colony. Being Mary White’s eighth babe may have assisted in the prompt arrival of William White on Friday 27 March 1863 but conditions would have been primitive.[1]  William’s father, Henry, was trying his luck in the area near Nerrigundah in Southern New South Wales. This region is part of the Great Dividing Range inland from Bodalla, which we associate with tasty cheese today. 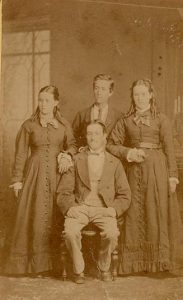 With older siblings up to 15 years old, William was mainly left in their charge and found himself in ‘strife’ more than once. The worst of this was as a toddler when he reached up to a pot of boiling water and scalded himself, with some of the scars remaining throughout his life. After Nerrigundah they moved to the goldfields of Araluen and finally to Mongarlowe, or Little River, as it was then known where Henry was able to buy a farm following a successful local dig.[2]

Life on that farm was pretty good for this country lad, and being that much younger than the older siblings he escaped many of the chores they were allocated. However it was soon time for him to begin school in the village of Mongarlowe. It was just over a 3 klm walk to the school so I can picture him dawdling along the way, taking in the joys of the wildlife in the surrounding bush. In line with many other children growing up on farms, he left school at an early age and began working on the property in earnest, although he was spared the more onerous chores and quickly earned the name ‘Pet Chicken’.

Henry and Mary had decided to visit Sydney along with one of their neighbours, an English lady. Whether they went by boat or by train, the journey to each departure point required careful consideration and then having decided on the transport mode, it involved much preparation for weeks beforehand. There was one incident William recalled in later life concerning a trip across the Budawang Ranges to the nearest port that he referred to as ‘Clyde River’.  This would have been on that river at Nelligen, which is about 8 klms from Batemans Bay.[3]  The track from there to Braidwood in those days, and indeed into the 1900s was treacherous with many creeks to cross and dangerous bends as it wound its way up the high range.Wikipedia, Nelligen 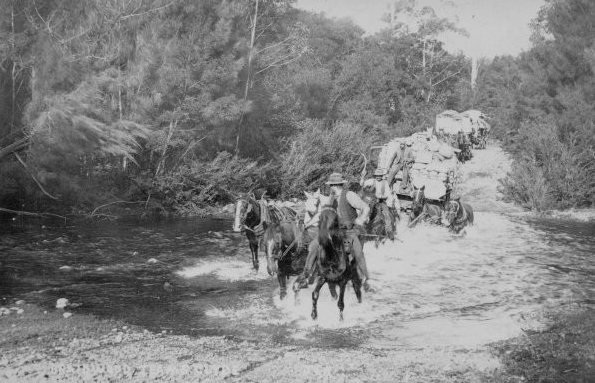 The task for William was to go along with them in the family spring cart and return home with the horse. A saddle for this was included, and the cart was washed and prepared for the journey by greasing the axle and maintenance was carried out. However, the horse itself turned out to be a ‘rank failure’ as the steep chasms spooked the animal and despite Henry’s urging would not go on. With the terrified ladies screaming, William rushed behind continually chocking the wheels to save the cart plummeting downhill.  They eventually reached the port safely and there awaited the amazing sight of the vessel, which was about 200 tons displacement.[4] This was the first boat that William had seen, so remained a vivid memory till the end of his days.  Luckily for him the return journey home in the saddle went smoothly with the animal sensing that he was returning to his usual pastures.

Another such memory was his first sighting of a train about 1876 when he was in his early teens. The railway to Goulburn had been opened in 1869, and at that stage there were no branch lines from that town. One of their mother’s cousin’s sons had been visiting the family in Mongarlowe for a few months and had to return home to Melbourne. That branch of the Neville family had emigrated there just after the parent’s 1852 marriage.[5] 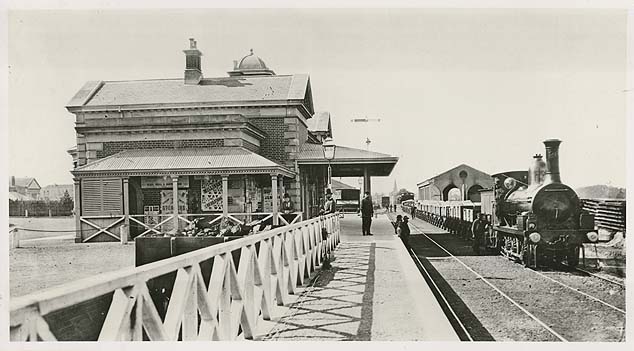 That 100km trip in the trusty farm car again required detailed planning and, not to miss the opportunity, it was loaded up with farm produce to sell at the bigger markets of Goulburn. They took an extra horse and spent two nights camping out on the road before reaching that town. At that period toll gates were still stationed on all the main roads and all who went through with horses and carts etc had to pay.

In 1879 the World Exhibition was held in Sydney for the first time and Henry and Mary decided that William and Rhoda (his sister born in 1861) should attend.[6] This was their first trip to the ‘Big Smoke’ so the whole experience was very exciting to their young minds. They stayed in lodgings down a lane at Surry Hills. The small allotments were tiny, with smells very unfamiliar to the country lad, who left thinking it was a dreadful place to live compared to their beautiful country surroundings. They visited the Exhibition and were duly impressed by it, but not appreciating the magnificence of the whole experience.

Despite his initial thoughts on Sydney, the country lad decided to pack his bag and try to find employment in Sydney where some of his siblings had also relocated. After a period he found a job in New South Wales Railways and worked as a blacksmith in the couplings line.  This was at the Eveleigh railway workshop where he remained for many years until his retirement. 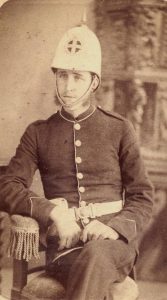 Portrait of William White in uniform about 1889

On 30 June 1886 William married Euphemia Brown Webster daughter of James Webster according to the rites of the Wesleyan church.[7] The couple lived in the inner-city suburb of South City (Redfern area) until William built their own home in Harrow Road, Bexley. The allotment was next door to Euphemia’s father, James Webster and prior to them having the funds to build the home, William began growing vegetables in the garden of his allotment. By August 1897 he had managed to fully fence the property and by the end of that year had begun building his house. In William’s diary of that period, at times the suburb is referred to as Bexley and at other times as Rockdale. This was probably because Harrow Road forms the border between the two suburbs and interestingly in his diary while living at South Sydney, he writes of ‘going up to’ the allotment. Today it is a short car-ride away of 11km!

For recreation William had joined the 1st NSW Rifle Volunteers and this entailed attending drill practices, evening shoots and the occasional weekend camp.[8] It seems he was a keen shooter with a good eye for the target. Interestingly for many years I was a member of a 22-rifle club and won a few trophies, so maybe that was an inherited skill.

The family moved into their new home on 16 December 1899 where William had a number of chickens and sold the eggs locally.  There were many entries in his diary dedicated to notating how much he paid for the grain and what the eggs sold for. He was certainly a keen ‘chook’ man.[9] 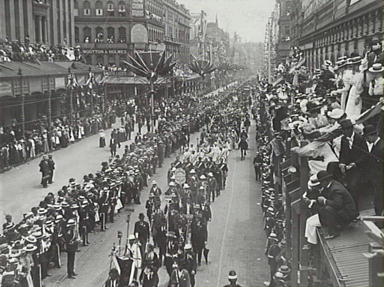 On 17 January 1900 the Second Contingent left for the Boer War and the family went to the parade to see the men off. The streets were crowded but they found a position by the Ladies Baths and were in the forefront of the crowds. One diary notation read ‘Was down at Horderns to buy a Mangle £2/12/6d for Amy’s Birthday’. His nick-name for Euphemia was Amy. When I read that, I had to chuckle to myself, what a thoughtful husband, although I’m not sure she would have appreciated getting it for her birthday, rather than any other day! For any young ones reading this story, ‘Horderns’ was Anthony Hordern & Sons, a Sydney department store and a mangle is an old type of hand wringer for washing. I well recall the hand wringer in our laundry when I was a young girl, although easier than hand wringing, it was still a laborious job.

William had continued with the Reserves and noted that on 1 January 1901 it was a great day in Sydney. This was the day the nation celebrated the formation of the Commonwealth of Australia. He noted that the Commonwealth and English troops all took part which made for a grand sight.[10] His 1st Regiment lined the streets near the tram terminus but it was a very close muggy day so they were glad to fall out and go to the camping ground at the old Paddington Rifle Range. Incredibly, another co-incidence was that during my shooting days in the 1970s, this was the home base of my .22 club in Sydney.  He went on to note a fortnight or so later that the English troops had left Sydney that day, but that some of their number had deserted after enjoying their time in our very different country.

The diary pages continued for many years with William regularly attending his Reserves drills, usually weekly until late 1903 when he expressed that he was going to finish his time with the unit as he was too busy on the home front keeping his garden and poultry going. The family were devout Christians and attended the local Methodist church where their daughters Elizabeth and Edith, sang in the choir.  Elizabeth Agnes White is my paternal grandmother and daughter of William and Euphemia born on 4 June 1887 at Sydney.[11] 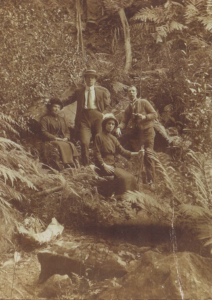 William and Euphemia were certainly a reasonably fit couple as demonstrated by a beautiful scene in one of the family photo albums when they were aged about 55yrs. The photo was taken on Empire Day which was then celebrated on the 2nd Monday in June, I estimate the date at 1918.  The Empire Pass Track was constructed in the early 1900s, and improved and opened on Empire Day, 1913, hence the name.[12]

I am indebted to my great-grandfather William White for his lengthy writings and diary entries. This is a great legacy for all his descendants who now number above 208.

[2] ‘My Home Life in Early Days’ a story written by William White in later life.

[3] The port Henry describes in those days as Clyde River would have been Nelligen, in the early period this was a busy port for coastal trade. The town was serviced by the Illawarra Steam Navigation Company and is upstream from Batemans Bay.

[6] The Sydney World Exhibition was the first World’s Fair in the southern hemisphere.Sydney International Exhibition of 1879

[12] An explanation of the Empire Pass track and its beginning is at https://bushwalkingnsw.com/walk.php?nid=803