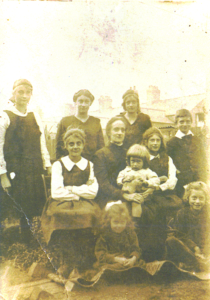 One of the most eagerly anticipated record sets coming soon is the 1921 census of England and Wales.  Taken 100 years ago on 19 June 1921, it is due for release in early 2022 once the 100 year rule has run out.  Findmypast won the contract from The National Archives to digitise the 1921 census and have recently released an update with confirmation that they are still on target for an early 2022 release.  Read more about it on the Findmypast website (https://www.findmypast.co.uk/1921-census) and their press release reported in Family Tree Magazine blog (https://www.family-tree.co.uk/news/1921-census-release-brand-new-update-from-findmypast/).

I am looking forward to the 1921 census as it will be the first census my four grandparents will appear in.  I am expecting to find them living with their parents, but one thing family history has taught me is to never assume anything. Sadly, my maternal grandmother, Muriel Nellie BRAYBROOK, will only be with her mother and siblings (see picture on right) as her father died in 1917[1]. Otherwise, I hope to find all my great-grandparents and a few great-great-grandparents.

One person I’m particularly interested in is my great-great-grandmother Caroline SMITH (nee LAGEU).  She is my only great-great-grandparent that I have not been able to find a death for.  Her last confirmed location was 87 Canterbury Road, Margate, Kent in the 1911 census[2]. 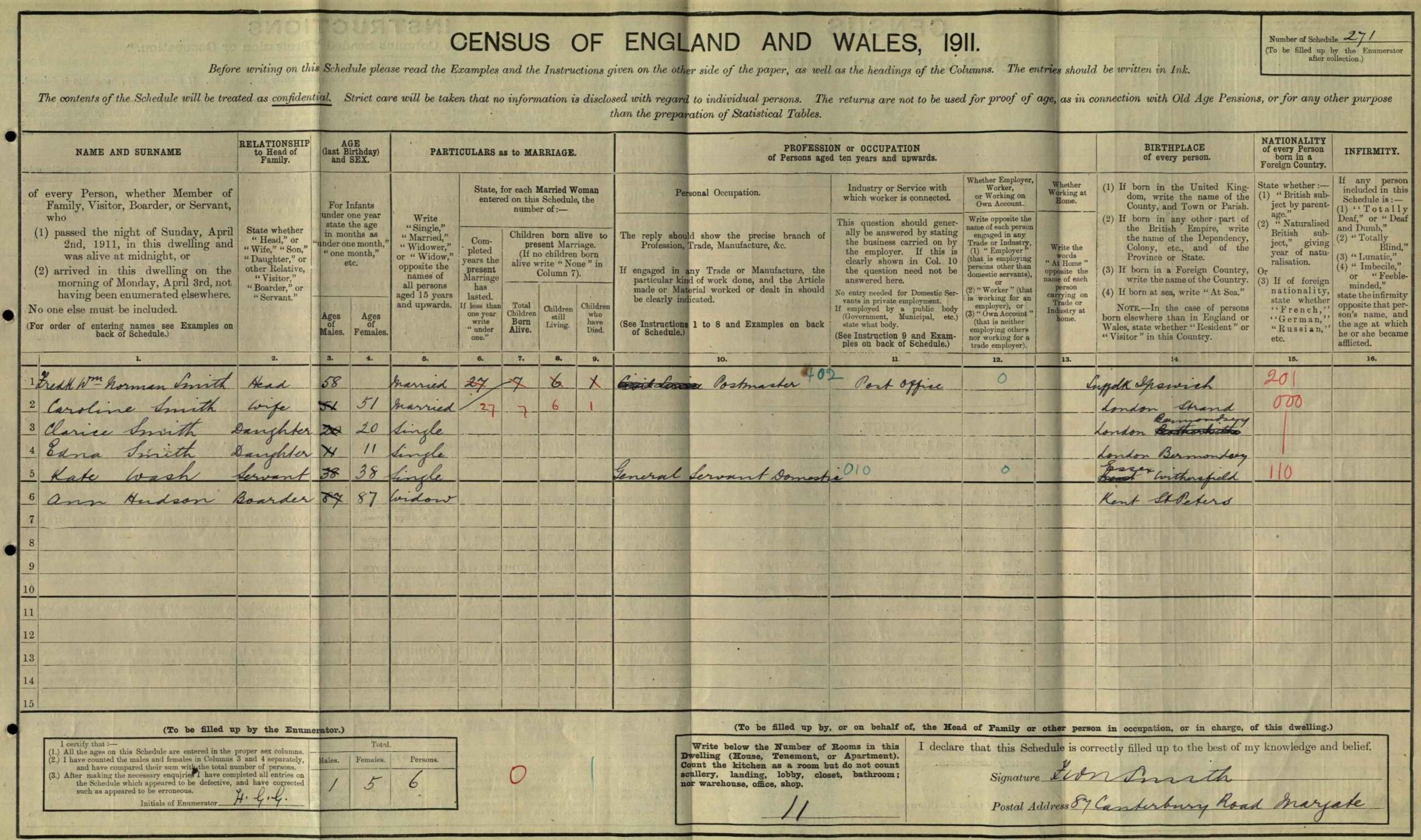 1911 census – Images with kind permission of The Genealogist © Crown Copyright

At that time, Caroline was living with her husband Frederick William Norman SMITH who was a postmaster, three of her children, a servant and a ‘Boarder’ called Ann HUDSON.  Ann HUDSON was an 87 year old widow but she was much more than a boarder.  She was Caroline’s adoptive mother.  Caroline was born on 2 April 1860 at 10 Surrey Street, Strand, Middlesex[3] to Thomas and Caroline (nee JONES) LAGEU.  10 Surrey Street was actually the ‘Cheshire Cheese’ pub.

She was living here in the 1861 census[4] with her parents but by the 1871 census[5] she was living with Elizabeth JONES and her children.  Caroline was described as a niece.  With the common surname, this took some unravelling as she was actually her great-niece (Elizabeth was wife of Caroline’s grandfather’s brother).  Two of Caroline’s cousins were governesses so it is assumed that Caroline was living with them as a pupil although her mother had died in 1869 so it may have been convenient childcare.

1861 census – Images with kind permission of The Genealogist © Crown Copyright

By 1873, Caroline along with her four younger brothers became orphans (the story of their father is another whole saga!).  Formal guardian papers (which I have been lucky enough to see at The National Archives[6]) show that Caroline was put in the care of Alfred Strivens HUDSON (who was Ann HUDSON’s husband) and her brothers went to their uncle Charles LAGEU at Exmouth Street near Farringdon, Middlesex.  Caroline lived with Alfred and Ann HUDSON until her marriage to Frederick William Norman SMITH in 1882[7].

1871 census – Images with kind permission of The Genealogist © Crown Copyright

What this shows is that ‘relationships’ on census returns are often misleading or need interpreting.  A common one is the use of ‘in law’ for ‘step’ and vice versa.  I’m sure we will find more interesting relationships in the 1921 census. 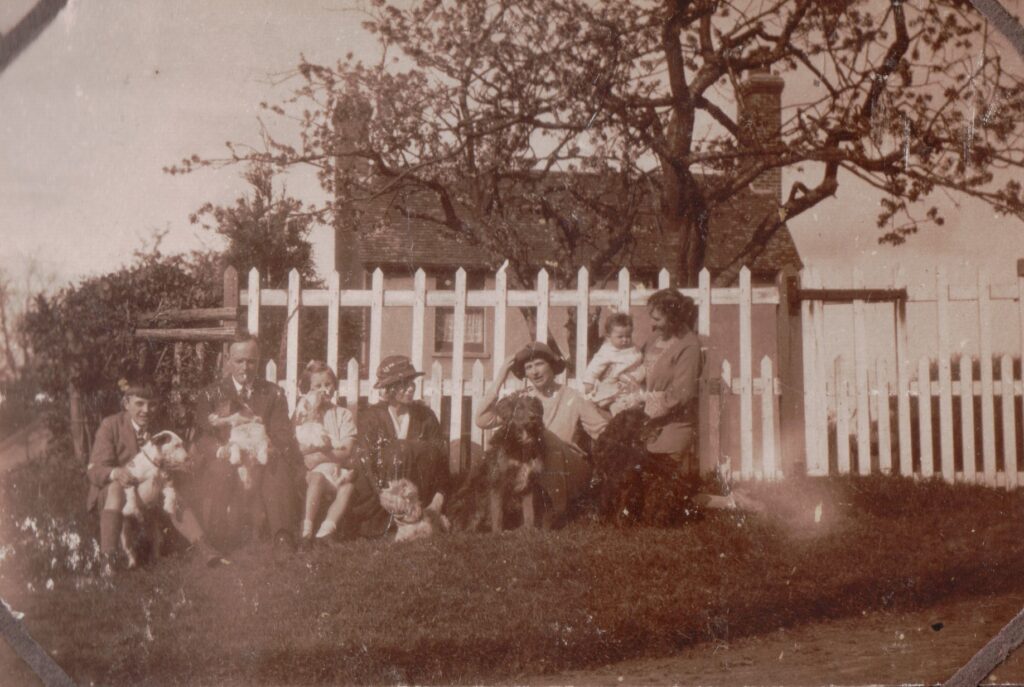 Is Caroline SMITH in this photo? © Amelia Bennett

Back to why I am interested in the 1921 census entry for Caroline SMITH (nee LAGEU) (who may be in the photo above but unfortunately it has never been confirmed).  As I said, I have no confirmed record of her after the 1911 census however I did search for her in the 1939 register noting that she would be 79 but I had not found a death for her.  With a common name like Caroline SMITH, I searched using her date of birth and found one entry of a Caroline SMITH living alone at 4 Church Avenue, Ramsgate, Kent[8].  She is described as a Widow and ‘Incapacitated’.  This alone did not provide proof it was her – how many other Carolines born on 2 April 1860 may have married a SMITH?  However, it did give me an address to try to find out more from.  This is when the wonders of newspapers became useful.  A search on the British Newspaper Archives (www.britishnewspaperarchive.co.uk) gave a very interesting insight – could this be my great-great grandmother misbehaving?  The article from the Thanet Advertiser on 3 December 1921 said:

ARMY PAY FRAUD
A POSTMASTER’S WIFE AND SOLDIER.
Henry James Murphy, respectably dressed, and Caroline Smith, a woman in years, of Church-avenue, were summoned at Ramsgate yesterday for “causing and procuring” money to be paid to the female defendant by means of false pretences, with intent to defraud, between the 3rd May and 17th July.

Was this the right Caroline SMITH?  Within the long article, the following snippets helped:

This all added up.  The exact address of 4, Church-avenue and the fact that she was the wife of a postmaster.  However, this opened up a mystery – when had my great-great grandparents separated?  I knew Frederick SMITH was alive in 1921 as he died in 1934 in Hampshire – interestingly, if Caroline was alive in 1939, her husband did not mention her in his will.

Luckily the British Newspaper Archive is regularly adding new newspapers and it was not long before another useful article appeared in my searches from 14 March 1914 again in the Thanet Advertiser.

WIFE v. HUSBAND
Case at Margate Court
At the Margate Police Court, on Wednesday, Frederick William Norman Smith, of North-street, Emsworth, was summoned by his wife, Caroline Norman Smith, who applied for a separation order against him.
A letter was received from the defendant’s solicitor, asking that the case should be adjourned.  The letter stated that a summons had been issued by the defendant against his wife for being a habitual drunkard, and it was desirable that both cases should be heard at the same time.  In addition, there were two important witnesses who were members of a touring theatrical company.  It was not possible for them to attend that day, but they would be in London on 18th March, when they could easily come down to Margate.

The article continued recording the debate over whether holding the case at that time was appropriate or whether to defer.  It was deferred to 18 March however no further information about the case has been found in newspapers.  Next stop will be Kent History and Library Centre to look for records of the case.

So with this information, I am feeling more confident that I have found my Caroline SMITH living in Ramsgate.  Hopefully the 1921 census will reveal the location of Frederick and Caroline SMITH and help add pieces to the jigsaw that is being pieced together.  I wonder how many more of all our puzzles will be helped by the 1921 census and how many new puzzles will appear from the secrets it holds?

Image by Pete Linforth from Pixabay