Lulie Ubania Medosa Bell was the exotic name given to a little baby born in Brisbane in the 1860s! 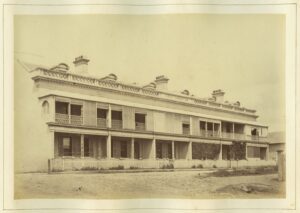 Where did her name come from as her parents, Joshua and Margaret Bell, had Scottish and Irish heritage? Why did they choose these names when their other children had quite usual names for the time? After undertaking a very basic search of the derivation of her names, I found the following origins and meanings: Lulie is English and has mostly been used in the USA and the UK; Ubania is unknown and has been used more often in Spain and the USA; and Madosa is Hungarian and the name is used in Romania and the USA.[1]

Lulie was born on 22 December 1868 in one of the six terrace houses of Harris Terrace in George Street, Brisbane as her family were one of its early tenants after its construction in the mid-1860s for George Harris. Her birth certificate records ‘the birth of an unnamed child’; sometimes children were not named until they were baptised or perhaps she was not expected to live as her birth was not registered until 9 April 1869.

Lulie only lived for ten months and died on 21 October 1869 with The Brisbane Courier recording her death on 30 October:

What I find quite shocking is the cause of her death which was dentition or in today’s medical terms, teething! The illness apparently lasted three weeks and Doctor R Hancock saw her the day that she died.  A child dying from teething seems quite incredible to us today. However according to accepted medical wisdom at the time, teething was fraught with risk and led to a number of disorders and displayed a variety of symptoms including convulsions and diarrhoea. There were many soothing remedies for parents to use including opium and alcohol all of which could lead to addiction and death. Was she misdiagnosed by Dr R Hancock or had a teething remedy gone horribly wrong?

A church service was probably held the next day for Lulie in the Mortuary Chapel of the Paddington Cemetery (now mostly covered by Suncorp Stadium). This Cemetery operated from 1844 to 1875 and was Brisbane’s main cemetery and the Chapel was used for services before the church was completed there in 1876. Lulie was buried in the Church of England section of the Cemetery because like most cemeteries of that time, it had areas for Anglicans, Wesleyans (Methodist), Roman Catholics, Presbyterians, Baptists, Congregationalists and Jews. There were also sections for heathens and paupers!

The church is still there, although it was destroyed by a storm in 1890 and rebuilt, as is a little churchyard which is only a small fraction of the original Cemetery. They are now dwarfed by the huge Suncorp Stadium where if you look carefully from the old churchyard, you will see a memorial to those who were buried there during the 19th century contained in the glass in the south-east wall of the Stadium. The artist has screen-printed images of a burial shroud onto the glass panels representing the illusion of a torn veil which, in the Jewish and Christian tradition, symbolises the tearing of fabric or the passing of life. The artwork is called Veil and was completed in 2002, by Jill Kinnear of Dundee in Scotland.

At the time that Lulie was buried in the Paddington Cemetery it was overcrowded and had many neglected headstones because Toowong Cemetery was about to open. It closed in 1874 and then fell into a total state of disrepair. Finally in 1914 it was converted to a park with relatives given a year to exhume and reinter their loved ones. However very few were moved. 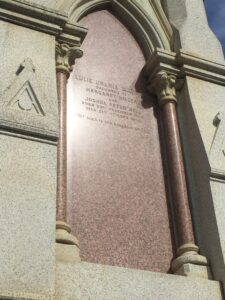 Sadly, the headstone is no longer there although the words have been included on the memorial to her father and brother and other members of my family with the added words ‘Of such is the Kingdom of God’.

The records of this little baby’s life are rather confusing probably because she had such an unusual name, and it was usually transcribed inaccurately.

Lulie’s birth record on the online database of the Queensland Births Deaths and Marriages has her birth recorded under Unnamed and her death record under Julie Ubania Madosa Bell. NOTE If you cannot find a record for a birth, the baby may not have been named at the time of their birth registration so search under Unnamed and the names of her parents and, as always, obtain original certificates as in this case her death certificate has her correct name.[4]

The Brisbane City Council Cemeteries online database for the Toowong Cemetery has her name as Lulia Ubania Nedosa Bell.[5]

In 1985 transcriptions were made of the headstones in Toowong Cemetery which recorded her name as Lulie Deania Madosa Bell; often these headstones were very old, and the words were difficult to read.

I am glad to find out that Lulie’s remains and headstone were moved to Toowong Cemetery to the same grave as her father and also to learn a little more about the little baby with the striking name.

[1] https://www.namespedia.com
[2] The Brisbane Courier, 30 October 1869, p.1 Family Notices    http://nla.gov.au/nla.news-article1300106
[3] The 1985 transcription of the headstones in the Toowong Cemetery had Lulie Deania Madosa Bell probably because the people doing the transcribing often had to guess what the words were on graves about 120 years old.
[4] https://www.qld.gov.au/law/births-deaths-marriages-and-divorces
[5] https://graves.brisbane.qld.gov.au