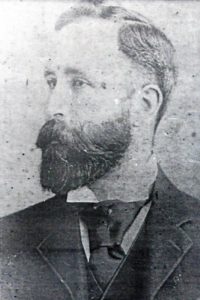 My great grandfather, Alexander Fairweather, was a well-regarded builder and contractor in the Grafton district of Northern New South Wales.

Born at Kinnaird farm, Lintrathen, Forfarshire, Scotland on the 22nd August 1840 to Alexander Fairweather and his wife Jean Anderson, he was the youngest of six children. Kinnaird and the surrounding farms occupied land owned by the Earl of Airlie and by all accounts his father had worked there from prior to 1835.[i]

Following the death of Alexander Snr in 1853, Alexander moved with his mother and youngest sister Betsy to the nearby market town of Kirriemuir, an important centre of the home-based weaving industry. Jean became a linen weaver, while Betsy became a stay maker and Alexander, a house carpenter.[ii]

In 1863, Alexander 22, together with Jean and Betsy, made the 3-month voyage aboard the “Tornado” from Liverpool as unassisted passengers together with about 380 others. They arrived into Hobson’s Bay, Port Melbourne on 2nd April.[iii] Within the month, they had moved to Grafton. Alexander’s eldest brother William, had already settled in the area, having purchased farming land in Ulmarra along the Clarence River from Grafton.

The settlement of Grafton had been initially established in the late 1830s when red cedar was discovered in the forests along the river. Timber getters soon arrived in large numbers ready to exploit the forests. Graziers followed. The district flourished, the success of the town from the logging and rich agricultural land meant that the population swelled rapidly with much construction occurring.

However, a severe flood in February 1863, just before Alexander’s arrival, damaged much of the town and surrounding districts. It would appear that this was fortuitous timing for Alexander, as there was much building and rebuilding to be accomplished. It was perfect timing for the young carpenter.

In 1864, Alexander and William were noted as the joint contractors for the construction of the Church of England Ulmarra, a significant undertaking for the young tradesmen.[iv]

Alexander soon became a sought after builder and was successful in gaining ongoing contracts for numerous constructions across the district, both for private dwellings and public buildings.

In 1866 Alexander was contracted to build the Rocky Mouth (Maclean) School house and in 1870 he built the Swan Creek Public School comprising of four rooms and a shelter shed for the students at a cost of £598. Of note: “Attached to the school-room, is a lavatory—a very necessary and acceptable appurtenance—especially as the children have some distance to come to school”. The school was a showpiece of its time.[v]

Mention of Alexander’s work continued to be featured in the “City Improvement” section of the Clarence and Richmond Examiner. He made significant improvements to Maxted’s Saddlery, enlarged the Wesleyan Church and built the adjoining parsonage.  He constructed hotels such as Lairds Family Hotel and cottages for the government workers at the Colonial Sugar Refinery at Harwood. 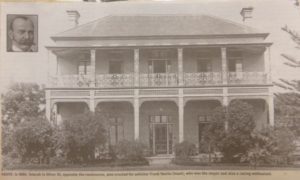 One of the largest private residences in the district, “Telarah”, was completed by Alexander in 1880 for solicitor and then Mayor Mr Frank Norrie in Oliver Street, fronting the Grafton Racecourse. An imposing two story brick home, it featured a 10 foot wide entrance hall off which extended a spacious drawing room, dining room and library ornamented with decorative cornices. A broad staircase led to the upper floor where there were five bedrooms the largest boasting an adjacent dressing room. 12 foot ceilings featured thoughout.  Balconies with elaborate cast railings ran the full length of the building both front and back.  Adjacent to the main building connected by a covered walkway, were the kitchen, bathroom, servant’s room and pantry.[vi] Today it is Heritage Listed.

Prentice House was built shortly after as the residence and consulting rooms of Dr James Houison in Fitzroy St and today is the home of the Grafton Regional Gallery. In an attempt to avoid future flood damage, the house was raised 1 metre above the ground on brick piers. It’s style was typical of the time, with living quarters separate to the kitchen and servant’s rooms. What was unusual though, the second floor was only one room wide and opened out over a balcony. Still, the upper floor had a lobby, a bedroom and bouidoir.

Alexander built “Argyle” in Fitzroy street as his family home. Of a similar style as Dr Huison’s residence, it was on a much more modest scale. 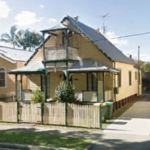 In addition to his building work, Alexander was quite outspoken with regard to civil matters in the growing town and wasn’t afraid to voice his opinion. In 1866 he penned a lengthy, articulate letter to the newspaper in favour of Friendly Societies by which members, for a small regular payment, were paid in the event that accident or injury prevented them from working.[vii]  He joined one such Friendly Society, the Ancient Order of Foresters, initially established in Britain in 1834. He later held the position of Secretary for a number of years. In 1869 he delivered a welcoming address on behalf of the Foresters to the Earl of Belmore, Governor of the colony, during his visit to Grafton.[viii]

In 1875, Alexander was elected as one of two auditors for the Grafton Borough Council. It was a position he held for several years.[ix]

Alexander died in 1919 and an article published in the newspaper afterwards caught my eye. It mentioned that Alexander had “peculiar ideas” describing the monument which he had built for himself in the Grafton General Cemetery prior to his death.[x] I have seen that monument and it is indeed the tallest, most noticeable one there, it towers over me. Apart from Alexander, my great grandmother Georgina is also interred there. In addition, there are inscriptions for his mother Jean, daughters Mary, Jessie and Emily and her husband Alfred, and his grandson Ainslie Alexander and his wife Nea. My grandparents Ainslie and Florence Fairweather are in the adjoining plot, Alexander’s sister Betsy, husband David Spalding and daughter is in front.

A visit to the Clarence River Historical Society in Grafton revealed more. Apparently, Alexander had made his own coffin and had a monument erected for himself on a plot in the Presbyterian section of the cemetery some years before he died. However, prior to payment for it, Alexander became insolvent. According to solicitor of the time, Robert C Law, Alexander had become insolvent several times over the years. He was declared bankrupt in 1892.  In addition, Alexander had left property in Fitzroy Street (Argyle?) to his wife Georgina but had put a caveat on the title of it, “the old devil had never told his wife”.  As a result, she faced great difficulty in passing the property to her daughters Mary and Jessie as she wished. Finally, when the monument site was being prepared for Georgina’s burial in 1929, gravediggers dug too far across and accidentally uncovered Alexander’s coffin and hastily filled it in before preparing the ground for her burial.  It was also noted that Land Title documents confirm Law’s account of these dealings “by that wily old fox”.[xi]

Wily old fox or not, I am proud of the work achieved by Alexander Fairweather. He played a significant part in the development of Grafton. His work was and is still today much admired. The carpentry trade was continued on by his son, his three grandsons, one of whom was my father, and in turn his two great grandsons.