Four-year old Catherine Irwin sat in a school room in a slab hut in Newcastle in May 1816. Nearby sat her seven-year-old brother, William and 15 other girls and boys aged from 3 to 13 years. The Irwin children were in Newcastle with their father Ormsby Irwin, a life-term Irish convict, who had been convicted in Sydney for the manslaughter of Sergeant Robert Morrow of the 73rd Regiment. Catherine and William’s mother, Eleanor Irwin who had been convicted of the same crime was sent to the Parramatta Female Factory to serve a similar term of two years. As a young free woman, she had accompanied her husband to New South Wales in 1809.

The children were taught the basics of reading, writing, arithmetic and religion by Henry Wrensford. He had been convicted in May 1812 at the Middlesex Sessions Peace and sentenced to seven years transportation. With a Ticket of Leave, he began teaching at the school in Newcastle following Governor Macquarie’s desire in ‘disseminating the first principles of Common Education’.[1]

As Catherine and William had been in Newcastle for almost two years before the school was established under the Commandant’s orders, they are likely to have played with the other children who joined them in the school room.[2] Who were their playmates and fellow scholars? 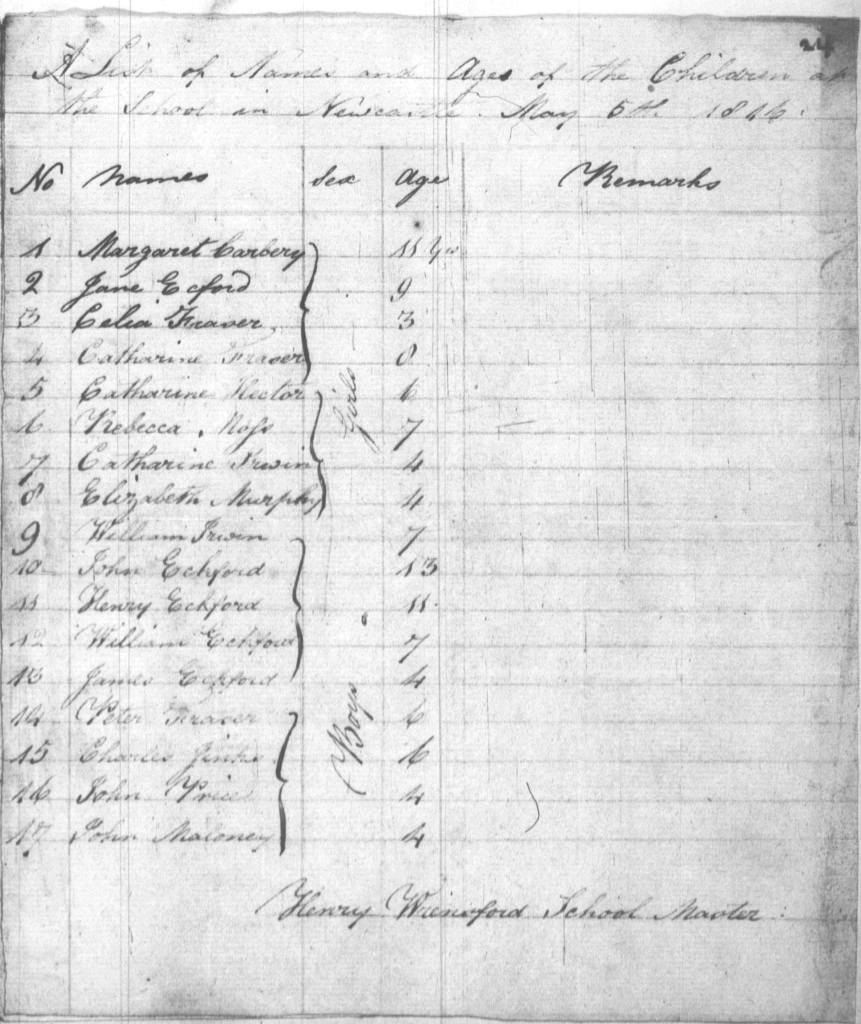 The children at school in Newcastle 5 May 1816.

Five Eckford children formed the largest family group in the school. John at 13 years, the eldest boy at school was joined by his siblings, Henry (11 years), Jane (9), William (7) and James (4). Their mother, Mary was a convict who arrived on the Earl Cornwallis in 1801; their father, William, a seaman who sailed on the same vessel. In 1813, he was sentenced to death for stealing sheep but when the sentence was commuted, he found himself at Newcastle, where he was recommended for the position of pilot. His conviction was later exonerated. Eckford families remained living in northern New South Wales for many years.

Three Fraser/Frazer children also attended. Their father, James had arrived in New South Wales in 1809 as a member of the 73rd Regiment and was accompanied on the Hindostan, by his wife, Christiana and their daughter, Catherine. While stationed in Sydney, James stole some clothing and was sentenced to seven years hard labour in Newcastle. His wife and family accompanied him, where their next child was born.

The other seven children were not part of a family group at school. However at least three of them, Catherine Hector, John Price and John Maloney were the children of convicts, free men or regimental soldiers who had also been sent to Newcastle following colonial crimes.

This list of children has been one of my great finds in family history as it has given me a chance to learn more about the young lives of my great-great-grand aunt and uncle and importantly about some of the children they learned and played with, at least for a brief time in their young lives.[3]

All seventeen children have been remembered at the East Newcastle Public School through the imaginative sculpture created in 2016 by Heather Swann to mark the 200 years since those children first sat in the rough hut.[4] Each bronze stool is unique – as one of the six three and four year olds in the group, I imagine Catherine sitting on one of the lower stools. The school is the oldest continuous school in Australia. Newcastle Grammar School has also claimed its link to the earliest days of Anglican education in the city through the small school beginning in 1816.

Catherine and William Irwin spent just 10 weeks in the school before they returned to Sydney, and shortly after travelled to Hobart Town with their father who was recommended for the position as Overseer of the Public Gangs in the settlement. Their mother remained in New South Wales where, as Ellen Skuthorp, she became the mother of a large second family.