As many regular readers may know, I migrated to Australia in the 1970s and was convinced that I was the only family member to have made that long journey, apart from my sister and her family who migrated to Australia in the same year. As my family history research has progressed, I’ve discovered a number of connections to this great country, on both my paternal and maternal lines. Some of these have arisen by chance when working on another project and have resulted in me going down an unexpected research trail.

My most recent discoveries relate to the Priestley family who came from Lancashire, although I subsequently discovered they originated across the border in Yorkshire. Robert Priestley and his wife, Jenny/Jane Tattersall, had at least 12 children; their only daughter Hannah married my maternal 2x great uncle Josiah Hall. We met the Hall family in an earlier post – Josiah was one of the sons of Joseph Hall and Hannah Radford. Josiah was a Wesleyan Minister at various times and appeared to travel around England practising his ministry. I have found no record of he and Hannah having any children. Robert Priestley had married Jenny/Jane Tattersall in September 1817 in the chapelry of St James, Haslingden. From Enock born in 1818 through to Jesse born in 1841, the couple had children at fairly regular intervals. I discovered details of their baptisms, mainly in Goodshaw in Rossendale in rural Lancashire, from the wonderful Lancashire OPC website and confirmed these with records on FamilySearch. 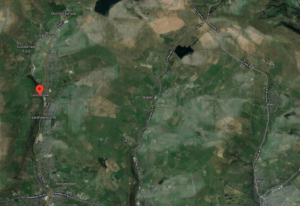 Goodshaw in rural Rossendale in Lancashire 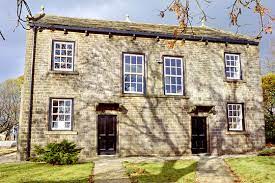 Robert Priestley had various occupations: inn keeper and calico printer in Goodshaw before the family relocated about 10 miles (about 14km) to Heald, Lancashire. He spent many years in his later life as a grocer, which was the occupation on his death certificate in 1864. Until preparing for this blog post, I hadn’t done much research on the family, but with sons named Enock, Enos, Jared, Eber, Elisha (two of these), Jephthah and Jesse and a daughter Hannah, I surmised that they were non-conformists and this was later confirmed. The family resided at the Goodshaw Chapel in the 1851 census and Enos was enumerated as a chapel keeper.  It is more than likely that this was the Goodshaw Chapel, the sole surviving non-conformist chapel cared for by English Heritage, from which the photo is taken.

Enos and his wife, Sarah Spackman, migrated to Victoria in Australia with their 1-year old son Josiah Spackman Priestley in 1853 on the John Barrow, and they started me on this research trail. Born in 1827 he was Robert and Jenny’s fifth son. Sarah was his second wife, the first being Elizabeth Pickersgill whom he had married in 1847. She had died within a couple of years and he then married Sarah in 1851. Perhaps the impetus for this second marriage was that Enos and Elizabeth had a daughter Zillah in 1849 and, as was often the practice in the 1800s, widowed men and women remarried quickly to provide carers for any children. I have not found a record of Zillah travelling to Australia with Enos and Sarah, although she may have visited. I have so far been unable to find her in the 1861 census but she reappears in Lancashire in 1871 with her grandmother Jane Hall. 29 year old Zillah married a widower, Sutcliffe Greenwood, in 1883 in Rochdale in Lancashire, dying age 48 in 1897 in Burnley.

Within a year of arriving in Victoria, Enos and Sarah’s child, Josiah Spackman Priestley, had died. A second child, Josephine Spackman Priestley, born in Bright, Victoria, was only 2 years old when she died in 1855. It’s possible there was a third child, Blanche Beynan Priestley, born in 1856 and died within a year, but the mother’s name is recorded as Sarah Beynan and not Sarah Spackman. This could be a mis-recording or mis-transcription and is subject to verification. Enos himself also died in 1857. What a set of tragedies for Sarah to experience within such a short time period.

I wondered why Enos and Sarah came to Australia. Perhaps it was to escape the grim existence in industrial Lancashire, but it does appear that the Priestley family were quite adventurous and didn’t necessarily stay within the confines of their Lancashire or Yorkshire homes. I imagine living in county border country, there would have been a significant level of cross-border migration. Enos’s grandfather Robert had relocated to Goodshaw in Lancashire in the 1700s. They were confirmed non-conformists and Enos’s father Robert was a society steward of the Wesleyan Church and, as mentioned, had lived at the chapel in Goodshaw. 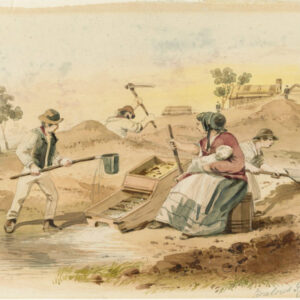 The recent presentation at GSQ by Dr Dot Wickham on Goldseekers on the Victorian Goldfields has now generated another reason why Enos and Sarah came to Australia – it was probably in search of gold. The presentation gave me a greater understanding of life on the goldfields and suggested resources to find out more about Enos and Sarah. I was taken by this painting from the State Library of Victoria depicting life on the gold diggings with a woman nursing a child while still searching for gold. What a different environment this presents from their home in rural Lancashire. I decided to purchase Enos’s death certificate, which was so much more informative than an English one. I learnt that Enos died of dysentery on 5 June 1855 at Tinpot Gully, Sandhurst, which is now known as Bendigo. This cause of death is perhaps not surprising giving the insanitary state of the diggings in the early years of the gold rush.  The death certificate gave a mangled version of his and his parents’ marriages and has several crossings and notations as the registrar sought to amend the record. It was possible that the informant, George Hindle, was not fully aware of Enos’s background. The death certificate did, however, confirm that Enos had 3 deceased children, one male and two female, as well as a 7-year old daughter Zillah, who may still have been in England. Enos was buried in Kangaroo Flat Cemetery, by a Protestant minister, retaining his faith to the end. 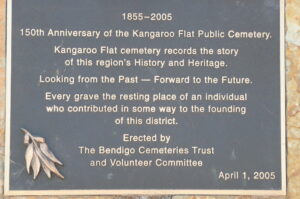 One of my main queries in relation to Enos’s death record, was why didn’t they ask Sarah for information about Enos’s marriages. She could easily have advised that she was Enos’s second wife, not his first. Maybe she did and George Hindle, the informant, mangled the details. If Sarah was illiterate, she may not have realised the information was incorrect.

Another question I had was whether Sarah remarried. I found 2 possible marriages for a Sarah Priestley but given the date and place, a marriage in January 1859 at the Wesleyan School House in Sandhurst, Victoria to William Berryman Jennings seems most likely. This was confirmed by an announcement in the Bendigo Advertiser.

It is interesting to note that Jared, a younger brother of Enos, also spent some time on the goldfields in Bendigo and was linked to the Wesleyan School House: his story will be told in greater detail in my November post. In researching Jared further I discovered links with the migration of Lancashire textile workers to Russia as well as to the Victorian gold rush.

Sarah had 5 more children with William Jennings between 1863 and 1873, and three daughters and one son were still alive at the time of her death in November 1906 at her daughter’s house in Golden Square in Bendigo. Like Enos, Sarah was buried in Kangaroo Flat Cemetery in Bendigo, in the Wesleyan/Methodist section. Neither Enos nor Sarah have a memorial stone.  Her death was also announced in the Bendigo Advertiser.

Enos had a short life in Australia; perhaps he was lucky in his search for gold, but probably was not, like many other gold seekers. After the death of her three children with Enos, Sarah seemed to find a new life with her second husband and family, retaining her links with Bendigo to the end.

What an interesting research exercise this turned out to be and I’m grateful to several members of GSQ who helped me to piece this together. I could have written so much more about other members of this family, but space precludes that. You will get a second episode in November, however. My maternal ancestry continues to reveal some surprises. I hope you also find it interesting.