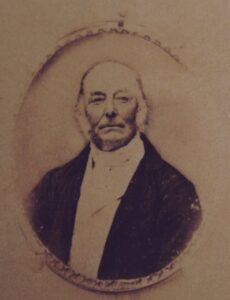 The chance discovery of a small book ‘The Settlers of West Pennant Hills Valley 1799 Onwards’ in a second-hand store at Leura New South Wales a couple of years ago was timely, as I’d just begun to research my husband’s Bellamy ancestors. It mentioned the family and it prompted me to find out more about them.

William Bellamy, found guilty at the Old Bailey of stealing shoes, received a sentence of 7 years. He was transported on board Active, part of the Third Fleet, arriving 1791.  Ann Faye had been found guilty in the Kilmainham Sessions, Dublin, of a “felony committed in a dwelling house”, sentenced to 7 years and was transported aboard Marquis Cornwallis. She arrived in the new colony in 1796.1

In 1804 William was granted 100 acres land by Governor Phillip Gidley King in the Dundas District, as Pennant Hills was then known.  This property was previously the forfeited grant of missionary William Henry and became known as Bellamy Farm. William was granted a further 30 acres by Governor King in 1806 in the Field of Mars. He established substantial fruit orchards, grew wheat, maize and potatoes, and cleared further land for grazing horned cattle, sheep and hogs. William was considered the first permanent settler in the district.2

In 1818, their son James married Hannah Singleton, daughter of William Singleton. Hannah’s brother Benjamin had, with other explorers, discovered a way through the Hunter Valley establishing a settlement there. Singleton was named after Benjamin. Together James and Hannah raised a family of 14 children, all but one of whom survived until adulthood.

By 1828 James, at the age of just 31, held a total of 240 acres of land in the Castle Hill / Pennant Hills area. The 1828 Census describes 5 acres as cleared and 47 cultivated, he owned 6 horses and 50 horned cattle. He and Hannah had 5 children at the time, and 4 assigned male convict servants.3 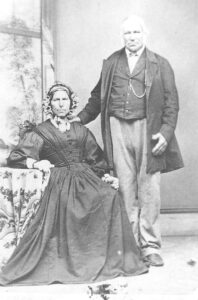 Despite much of the land being cleared for agriculture, the Pennant Hills area was still heavily timbered (blue gum, blackbutt and cedar), providing not only building materials for the growing colony, but also a perfect hiding place for bands of bushrangers who terrorised and stole from the early settlers at the time.

As reported in August 1821, James had testified that on 23 March a band of bushrangers including Geary, Young and Butler “feloniously and forcibly took from his dwelling, a musket, bayonet, cutlass, and a powder horn.” 4

However, this wasn’t the only time James encountered the bushrangers. James and his younger brother, John, encountered Geary and his gang again in July. An altercation resulted in a firearm discharging causing the death of the bushranger Butler. Fortunately for James, the inquest returned a verdict of Justifiable Homicide.5

In 1836, together Mr Horne the Chief Constable at Parramatta and “Mr Bellamy, a Native of the Colony, who has also at various times rendered himself extremely active in ridding the country of desperadoes, succeeded in capturing four bushrangers, who have long and successfully carried out their depredations.“ 6

James was appointed Special Constable status and was said to have built a small temporary holding gaol on his property for apprehended felons in the district. When in 1838 a school was established on the site of the current West Pennant Hills school, James Bellamy was listed as a patron.7

In 1840 William and Ann drew up documents to lease their 100 acre Bellamy Farm to James stipulating he paid them £78 per annum until their deaths (1850 and 1843 respectively) after which the property including the buildings, orchards and grazing land became his. 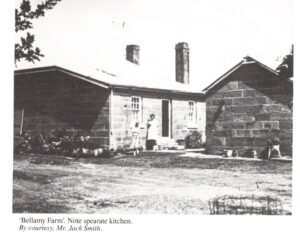 In 1856 James purchased a further 700 acres for a cost of £900. Over time he amassed significant land holdings in the district as well as several in the Wollombi area of the Hunter region.7

When Hannah Bellamy died in 1869, she was interred at the Castle Hill Cemetery. James died in 1875 at the age of 79 and 10 months. On purchasing his death certificate transcription, I was surprised that Hannah was not mentioned nor were their children, despite the informant, H Britten, described as a friend and having performed the burial ceremony for Hannah. Instead, a different wife was named.8 Martha Martin was aged just 26 when she had married 76 years old James at St Pauls Church Castle Hill in 1871. James then fathered two more children; Alberta and Florence when he was 77 and almost 79! Further investigation revealed Martha was in fact the half-sister of one of James’ daughters in law, Susannah.  At the time of James’ death, son Zadoc, wife Miriam and family lived with James and Martha at Bellamy Homestead. 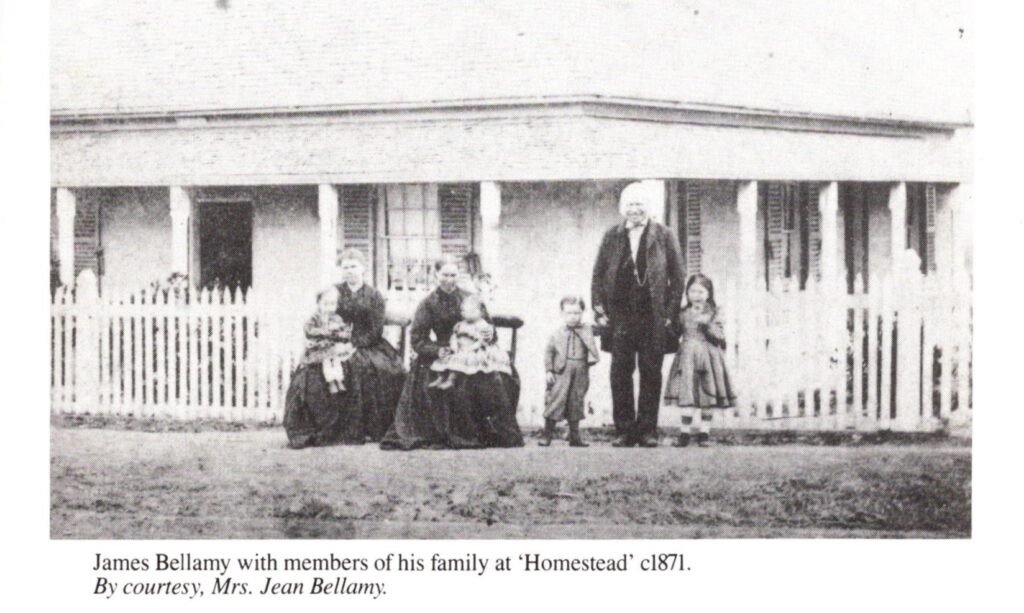 In his Will dated 1871, James left Martha £200, his bedstead, bedding, crockery, and kitchen utensils. Other furniture, 60 acres of land, livestock and Bellamy Homestead was left to Zadok. The remainder of his substantial landholdings were divided between his adult children, aside from those who had previously received portions. Two grandsons also received a smaller portion each. Written prior to the births of his youngest daughters, the Will made provision for the education and maintenance of any children James had with Martha. Martha later took their two young daughters to live in Factory Street Parramatta where she worked as a midwife and cared for State Wards. 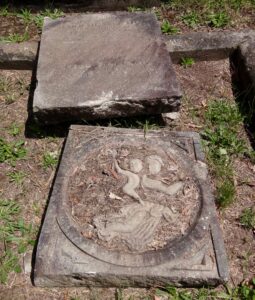 In a codicil attached to his Will, James also bequeathed £15 to the Randwick Asylum for Destitute Children, £15 to the Pennant Hills Church of England to be used over three years to increase the stipend of the minister, £15 to the Parramatta Infirmary for the “benefit and comfort of the poor patients”. Lastly, he stipulated that should it not be done prior to his demise that £25 be given to St Pauls Church at Castle Hill so that a vestry could be constructed in memory of his first wife Hannah.9

The vestry was in fact completed in 1874; “On one of the inner walls there is a tastefully executed brass tablet bearing this inscription Gloria in excelsis. This vestry was erected by Mr. James Bellamy, in affectionate remembrance of his wife Hannah, who died 14th October 1869”. 10

Aside from his land, James’ estate was valued for probate at £1600; he had been a wealthy man.9 James was interred with Hannah on the 8th March 1875 at the Castle Hill Cemetery.

My impression of James is that he was a shrewd, hardworking, benevolent man, caring for his family and community. Today, four streets in Pennant Hills bear tribute to the Bellamy family; pioneer settlers in the area. They are Bellamy Street,  James Bellamy Place, Hannah Bellamy Place and Bellamy Farm Road. 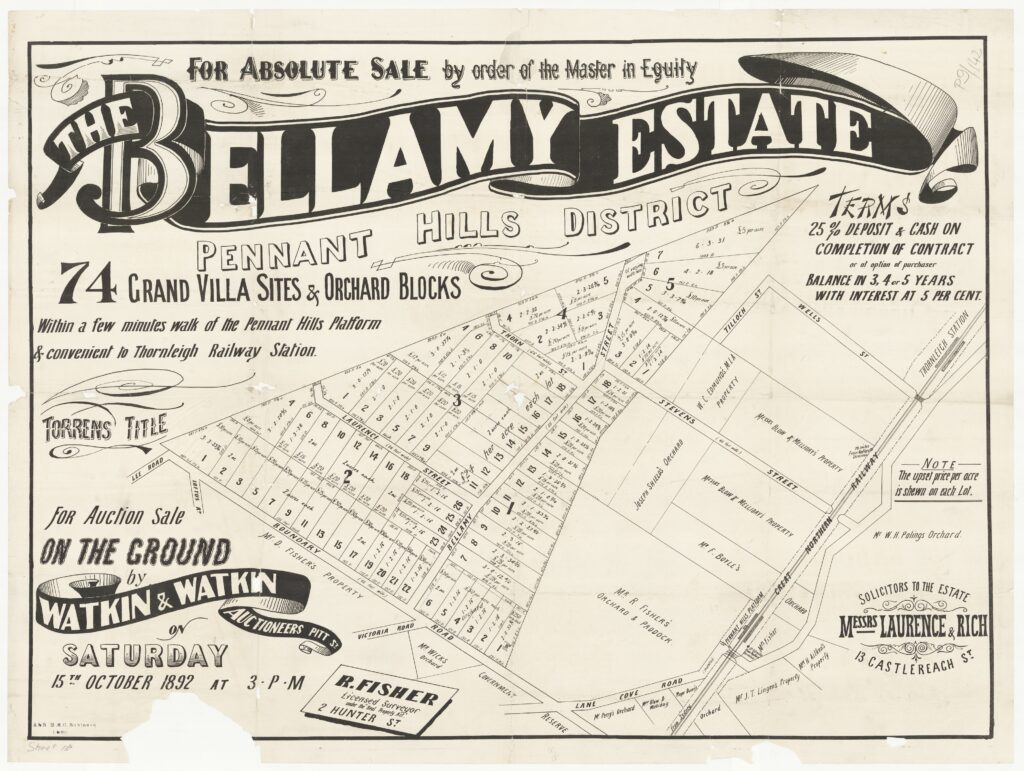