The fourth pregnancy of Sarah Irvine in the farming community of Ballytrim townland was no doubt a difficult time for her with three surviving children aged eight, four and two around her feet as this time her pregnancy felt different.[1] Husband James was a bootmaker in the nearby village of Killyleagh on the shores of Strangford Lough in Co Down and when Sarah gave birth to twins on 31 March 1849 it would have called on all the strength and mothering skills that she possessed.[2] 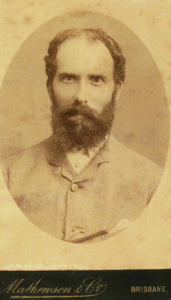 Portrait of Andrew G. Irvine cc1895 when about 46 years old

The twins Robert and Andrew, survived to adulthood and in the latter months of 1873 decided to join their older siblings in Queensland. Originally their sisters Margaret and Mary Anne were to travel with them, but Mary changed her mind at the last minute and did not board the vessel.[3] The remaining three, Robert, Andrew and Margaret departed from London on 7 January 1874 and arrived in Brisbane on 11 April 1874.  They travelled aboard the Alexandra and at the time Andrew and Robert were 24 years old and Margaret 22 years, all travelling as free passengers as they came under a scheme funded by the Queensland Government.

Following in the footsteps of his father and some of his brothers, Andrew trained as a bootmaker, most likely under his father’s direction. By working hard he had saved sufficient to purchase a property in Brisbane by 16 February 1886 which was likely near his previous bootmakers shop at 111 Leichhardt St. Spring Hil.[4]&[5]

Andrew married Annie Euphemia Leitch on 24 April 1883 when he was 34 years old.  Annie’s parents were shown as John and Isabella Leitch and her brother Thomas Leitch performed the marriage ceremony at the residence of their father at South Pine River in the Caboolture District.[6] Andrew’s elder brother John Irvine, was a witness . 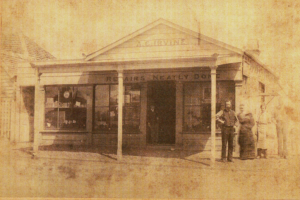 Andrew, Annie with baby John and family/staff outside the shop in Spring Hill, about 1884.

Andrew’s bootmaking business prospered and he opened another shop in Wharf Street.  By 1895 he was advertising for home help for Annie with the advertisement reading ‘Smart Little Girl wanted to mind a Baby.  Apply Belfast Boot Shop, Leichhardt Street’.[7]  A family story is that at the time, he had two girls working for the family who both had babies, and both left, leaving their babies behind and that Annie brought up those two babies alongside her own eight children. 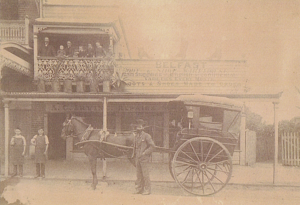 About late 1893 – The Belfast Boot and Shoe Warehouse in Spring Hill with Andrew Gilmore Irvine, Annie and their children on the balcony. The gentleman beside the horse and buggy is believed to be Robert Gilmore Irvine, Andrew’s twin.

Business problems were on the horizon for Andrew as on 21 March 1903, Atthow & Macgregor Solicitors of Edward Street advertised a general meeting of the creditors of his business. It seemed his liabilities amounted to £1100.[9]  This was a huge amount for the times with a second dividend of just nine pence in the pound declared to be payable at the Trustee’s office in the following October.[10]

Never one to be defeated, by 1905 Andrew had begun trading once more and moved his shop premises to 397 Queen Street in the city while residing at 210 Leichhardt Street, Spring Hill. At the time Mrs. Andrew Irvine was listed as a Greengrocer at 119 Leichhardt Street Spring Hill. In 1906 he was noted as leasing his brother’s premises at Bulimba as Hugh had relocated to Wynnum.[11] Both shop and residence were to shift location again as in 1910 the business was listed at 175 Eagle Street and the residence at 66 Gloucester Street, Spring Hill.   Annie was obviously a woman of great strength of character, which was to be tested just three years later when she suddenly became a Widow.

Portrait of Andrew Irvine on his bereavement card.

After having been ill for just 6 days, Andrew died on 11 August 1913 when 64 years old at the family home at 14 McConnell Street, Spring Hill.[12]  The cause of death was listed as influenza and congestion of the lungs.  Andrew’s eldest son John provided the information for the death certificate, and he stated that his father was born at ‘Balymena’, Down, Ireland.[13] However, as many family historians are aware, information about the deceased’s details provided at the time of their loved one’s death are often incorrect, as his birthplace was Ballytrim, Down, Ireland.[refer 1&2]

His brother-in-law Thomas Leitch was the Baptist minister who conducted his funeral service.  Andrew was buried at Toowong Cemetery with his parents James and Sarah Irvine (nee Gilmore), his brother Alexander Moffatt Irvine, his sister, Sarah Young (nee Irvine), his nephew James Campbell Irvine and lastly his wife, Annie. The only marking on the grave is “Mum & Dad”.[14] 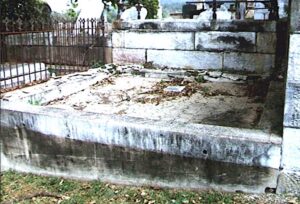 At the time of his death his children still living were John (29), James (27), William Gilmore (24), Thomas (22), Anne (20), Robert Robertson (19) and Andrew Alexander (18). Annie was a remarkable woman and continued running the family business. In the 1916-17 directory she is listed as the proprietor of a Boot Repair business at 68 Wharf Street Brisbane, as well as having a residence at Wahoumba Street, Highgate Hill. This stoic woman passed away on 14 Oct 1948.[15]