Over fifty years ago, when I was newly engaged to be married and eager to meet all the relatives, I was taken to 83 Dragon Street Warwick to meet brother and sister Jack and Mildred Watt who were first cousins to my fiancé’s father. I remember the experience quite vividly including the details of their house which was situated next door to Pringle Cottage, a beautiful sandstone building dating from the 1870s which was eventually acquired by the Warwick and District Historical Society for their museum.[1] 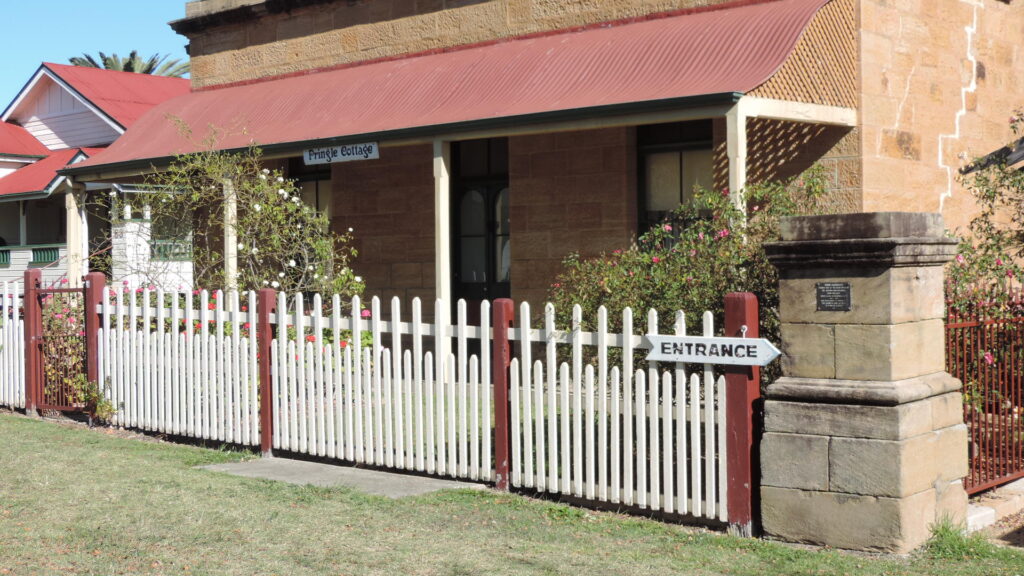 In particular I remember the large front parlour room which housed a magnificent full-length burr walnut Lipp concert grand piano with ornate legs and beautifully fretted music desk and ivory keys worn down by the constant use of generations of music students. Mildred was well known as a piano and violin teacher in the district and many of Warwick’s aspiring pianists learned their craft at that piano. Both Mildred and Jack were very musical and heavily involved in the musical life of Warwick. Much of the other furniture in the house was antique or had been built and carved in the Harvey School style by Jack who had won prizes for his wood carving.[2] Even the music stool on which the students sat was carved by Jack from cedar from the old Maryvale homestead.[3]

Sadly, I did not get to know Jack very well as he died in 1972 at the age of 83 a couple of years after I first met him. He was a quiet, polite man who was still working for a local Stock and Station agent doing their books at the time of his death. Mildred, however, I remember vividly. She was in her mid-sixties when we were first introduced. She was thin, energetic, with piercing intelligent eyes and a multitude of opinions which she did not hesitate to express. She totally fascinated me partly because she had the Irish gift of storytelling and partly because she seemed to live somewhere in the past while still being actively involved in her present-day life. Her reference point for all pronouncements seemed to be their father.  “Our Father…..” she would begin, and you knew at once that a statement was to be made that carried the weight of gospel.  “Our Father always used to say that in matters of medicine or religion one should not go past orthodoxy” was one pronouncement I remember well. She also had many stories of “Our Father” and his daring exploits one of which involved him placing shot at the feet of shearers running for their lives in the Shearers’ strike of 1891.

At that stage, in my early 20s, I had absolutely no interest in my own family history let alone the family history of branches of my husband’s family so I just listened to the stories and was amused and entertained by all the obvious eccentricity. In another time and another place in life however, I came to wonder just who “Our Father” was – the real man free of the Watt family myths and legends. 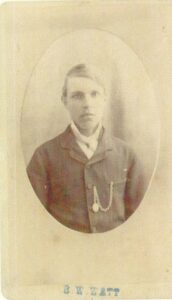 Willie Watt as a schoolboy

Robert William Watt known as Willie, was born on 27 December 1863 at Tullyrone, Armagh, Northern Ireland. He arrived in Queensland in April 1870, aged six, on the Maryborough with his parents, John and Sarah Watt and his two sisters Mary Ann aged four years and Amelia Jane aged one year. Amelia Jane was to become my husband’s paternal grandmother. John Watt was joining his two brothers who were already well established in Warwick and he immediately took up the life he knew well which was dairy and crop farming.

Willie first attended the East Warwick school, then became a foundation boy in 1875 of the Warwick West School later renamed the Central School. He was an intelligent pupil but left school early to work on the family farm. It seems he was not temperamentally suited to farming however and he returned to the township, finding employment first in the general store of Mr S. Nunn in Fitzroy Street and later with the Hon. T.A. Johnson who operated a similar general store in Palmerin Street next to the Warwick Town Hall.[4]

Married to Mary Jane Reid the daughter of another old pioneering family in February 1888, Willie moved to Wood Street Warwick and he and Mary subsequently had four children. Jack (John Wilson) was born in 1889, followed in 1891 by Millicent who died in infancy. Emily Isabella (known as Dot) was born in 1893 and became a very talented musician and teacher of commercial subjects at St. Hilda’s School Southport. She died in 1942. Mildred was born in 1904 and died in 1995.

To support his growing family, Willie who was of a practical turn of mind and interested in mechanical things, acquired a particular interest in bicycles. The first rudimentary pedal bicycle was developed in Paris in 1863 which was the year of Willie’s birth, but it was not until 1885 that a bicycle with equal-sized wheels, steerable front wheel and a chain drive to the rear wheel was produced.[5] Bicycles came to Warwick about 1894 and Willie was in the business of repairing them from the beginning.[6] He went on to acquire the dealerships initially for the “James” “Rothwell” and “Stearnes” brands and then for the “Massey-Harris” a popular machine which had been chosen by the Post and Telegraph and Police departments of several of the colonies because of its reliability.[7] [8] A short advertorial in the local newspaper in 1899 extolled Mr Watt’s mechanical knowledge and his ability shown over five years to minister to the “sick” bicycles in the town.[9]

His sister Amelia however had a completely different view of Willie’s abilities. In a letter written to “Cousin Mary” in 1915 but which was never posted, she discussed various members of the Watt and Irvine family. She was disparaging of Willie as only sisters can be.

Willie’s family are still in the same spot. I feel very sorry for them. Willie seems determined to sit looking at an old bicycle and sucking his accursed pipe while other men earn good wages and make comfortable homes for their wife and self to spend the last of their days in. I have no patience with him. Poor Mary has been a faithful good wife. 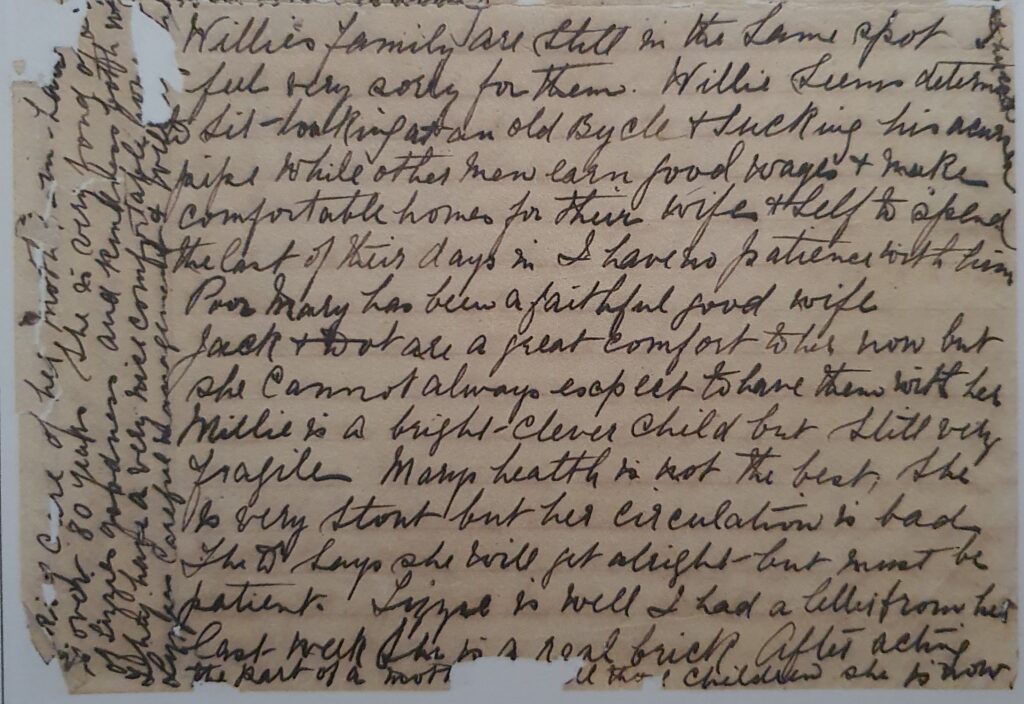 Music was another major interest in Willie’s life. He played all stringed instruments but was a particularly good violinist. He took a prominent part in the musical life of the town being involved in the Warwick Orchestral Society where he played first violin and was a member of the committee.[10] For a number of years he was also actively involved with the music for the services at the Methodist Church where he helped establish a very fine church orchestra which used to be a feature of the evening services pre-World War 1.[11] In fact, whenever there was an orchestra playing in Warwick, Willie was always part of it. His inquiring mind and technical abilities ensured he became a keen student of violins and all stringed instruments, and his advice on the merits and demerits of instruments was continually sought by those interested in acquiring them. He taught instrumental music from 1896 for many years at the Warwick School of Arts technical classes and also taught violin and flute privately from his home in Wood Street from at least 1891.[12] He advertised violins repaired, tuned or regulated in a scientific manner.[13] 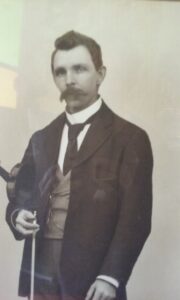 One of the achievements of which he was most proud was the rebuilding of a valuable old violin. Apparently two leading repair houses in London had declared it hopeless but its owner had brought the pieces out to Queensland and entrusted the assembling to Willie who completely restored the instrument to its former glory.[14] It was still in active use at the time of Willie’s death.

The family moved from Wood Street to Dragon Street in the early 1920s. By that time Willie was suffering with a what was to be a terminal medical condition. His death aged 63 on the 14 May 1927 after several weeks of acute suffering was seen as a happy release but the loss for his family was profound. None of his children married and they always remained a tightly knit family unit although very independent in their special interests and endeavours.

To his sister Amelia and others in the wider Watt family, Willie might have seemed just a dreamer of dreams, lacking in ambition to make more of himself. To his many friends he was a good man to know when advice was needed on all things mechanical or musical. He was certainly known as a great raconteur and spinner of yarns albeit with an acknowledged slight tendency to be just that little bit grandiose and opinionated. Be that as it may, for Mildred and Jack, he was much loved and much respected. To them he was always “Our Father”.