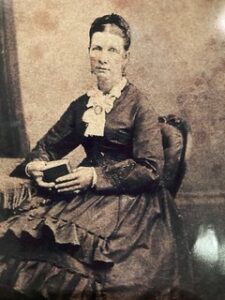 Way back in 1962, I went to Canberra on a year six excursion and we paid a visit to the old Parliament House (the current Parliament house was built in 1981). I have embarrassingly vivid memories of announcing to a somewhat stern-faced tour guide, that I was related to Alfred Deakin, second Prime Minister of Australia. I felt quite devastated when his interest bordered on apathy and his scepticism caused me to wonder about the validity of this item of folklore.

Folklore is alive and well in my family! Especially on my maternal side of the family. Growing up, I was fascinated by the numerous stories that constituted our family folklore and I partly attribute my obsession with family history to the many stories that my grandmother and other older relatives had shared with me so long ago. But, how accurate are these yarns? Family folklore can be likened to today’s media, riddled with bias, embellishment and distorted facts and I have learnt from the GSQ writing group that getting your facts right is important. Whilst folklore stories serve a valuable purpose, it is important to establish their validity wherever possible. This process can often explain why the facts have become distorted. I have examined some of the folklore in my family and discovered some interesting motives.

One of my folklore stories was designed to conceal an ugly truth. I have a female convict, Martha Wells (nee Shaw), who according to family folklore, was taken by blacks one day when she went outside their hut to chop wood. My research to confirm this information has revealed a different tale. I have discovered a baptism record for a James Crawley, born in 1842 to Martha Wells and James Crawley in the region where Martha was living with her husband, Thomas Wells.[1]&[2] Another branch of descendants claim that this was our Martha Wells and that she absconded from Thomas for another convict. Admittedly this is consistent with her personal history as she was noted to be a ‘bad’ girl on board the ‘Brothers’ which was the convict ship she sailed on from England to Sydney 1824.[3] Furthermore, she absconded from Mr Nichol, to whom she was an assigned servant.[4] It appears that the story about being taken by blacks was possibly invented to avoid the shame of the actual facts. 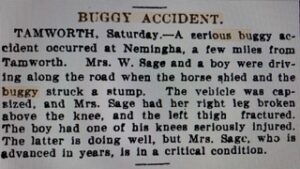 Perhaps in some cases, the real facts have been exaggerated to relate something of the character of the person concerned. According to another folklore item, my 2-x great grandmother, Hannah Sage insisted on breaking in an acquired horse, against the wishes of William, her third husband. The horse shied, throwing Hannah to the ground and she sustained a fractured spine. Trove reports a slightly different story, whereby Hannah, with a young boy, was driving a buggy along a street at Nemingha, a locality near Tamworth in NSW. The horse shied capsizing the buggy and both Hannah’s legs were fractured. The young boy sustained an injury to one knee.[5] I was delighted to discover the accurate story as perhaps Hannah was not as defiant as family folklore believed.

Some stories can be shrouded in superstition. My Salop ancestors (from Shropshire) were very superstitious. Seances and visits to clairvoyants were a feature of the family traditions and culture. An elderly great Aunt used to tell of her grandfather (John Deakin) and his misfortune. Apparently, he and another man were given the gruesome task of relocating some coffins and both men were dead within two weeks afterwards. (Handling coffins is associated with bad omens.) According to John Deakin’s death certificate, he died from bronchitis which he may or may not have contracted from a draughty graveyard![6] As he was a coal miner, it is also possible that his ill health was an occupational hazard. More conjecture! This item of folklore reminds me of an old rhyme that is linked to Shakespeare’s Hamlet.  “TB or NOT TB, that is conjecture! Consumption be done about it? Of corpse! Of corpse!”.

Unfortunately, some folklore only relates partial facts. A great grandfather is regarded as an alcoholic who, on his deathbed, pleaded with his two sons, to never drink. Much to my sheer delight, I found an obituary that claims the same man to have been well known and well-respected throughout the district where he lived.[7]

Finally, some stories are invented to amuse and entertain the next generations. When I was a young girl, my grandfather related a story about my paternal ancestors. He explained that there were two stocks of Figgis’s. One stock had red hair and were wealthy and the other were dark haired and were poor. When I questioned him about which stock we belonged to, I was dismayed to learn that we belonged to the dark-haired poor stock. At the time, I dismissed the story as pure fiction however, many years later, I discovered that this tale was based on fact, by which time, my disappointment was replaced with amusement.

I can’t help but wonder what folklore stories into the future, may be told about me and my life. Whilst I have enjoyed my life with its ups and downs, I can’t claim to have done anything outrageous or extraordinary. Oh… to have a crystal ball! As for Alfred Deakin, in spite of a conscientious effort to verify a genealogical link to him, I am still searching!