I was sorting through papers after my aunt, Lyn Young, died when suddenly a mysterious package fell out. It was a tiny, homemade book measuring only 6cm by 4.5cm tied with green string with the word ‘Pope’ on the spine.

Since then, I have spent some time discovering who owned this tiny piece, why did they make it and why did my aunt have it? Sadly, as often happens she is not here to ask anymore, and no other members of the family know what it is.

The book contains eight, tiny items and appears to me to be like a miniature scrapbook. In the 19th century, when this book was being compiled, people often made memory books which typically contained momentoes for a special person, event or writings which were meaningful to the person creating the book.

I have discovered that this little book was created by my 3 x great grandmother, Jane Gun-Cunninghame, who was born on 1 February 1791 at Mount Kennedy, County Wicklow in the east of Ireland. It appears that Jane commenced creating this book at about the age of 11. 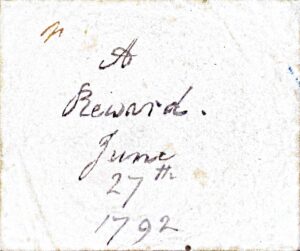 Some of the items in the book

The earliest item is folded brown paper on which is written ‘A Reward June 27th 1792’. Inside is a decorated cardboard circle with the word ‘Vienna’. She would have been almost one and a half at this time so perhaps her mother or father wrote the words and kept it as a memento for her.

Also included is a tiny, gold edged, stiff cardboard covered booklet (6cm x 4cm), dated December 25th 1802. Inside this booklet on very delicate paper are three verses from poems by James Thomson and William Cowper who were well known 18th century poets. The handwriting appears to resemble the writing on the previous item and to be that of an adult; perhaps once again it may have been done by a parent for her.

The next two items mention ‘Jenny’ and ‘Jeanette’ who may have been the same person. The first, a very delicate homemade envelope edged in gold has the words ‘Pour ma charmante, aimable Jeannette’ and on the back, a seal has been stamped. Inside the envelope on very delicate paper are the words of a poem.   The second item (no photograph provided) is a tiny homemade booklet containing the words ‘Jane Gun’s Book March 12th 1802    May I ever be able to gratify the wishes of my Jenny as easily as in the present case. J Gun M K [Mount Kennedy] Decbr 25th 1801.’ 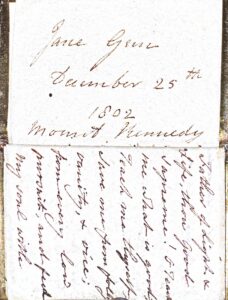 The following two items mention Henrietta Taylor who was Jane’s aunt, her mother’s sister.  The first item is a folded paper package which includes the words ‘Henrietta Taylor gave me this 13th of November 1803  At Booth’ and inside there is a very delicately cut out branch of a tree.

The other item wrapped in brown paper with the words on the outside ‘Bark of the aligator pear tree’  and inside on the back of the wrapping paper are the words ‘The bark of the Aligator Pear Tree which Aunt Taylor brought from Jamaica in May 1777  She saw it taken off the tree herself it lies in many folds between bark and the rind. The blacks take it from thence & steep it in water, then spread it on its present consistency. Eliza gave me this Ash Wednesday February the 15th 1804 at Clifton.’  The alligator pear tree was an avocado tree.

I have identified some of the pieces, but I still have many questions. Why is ‘Pope’ on the spine of the book? Who was Jenny or Jeanette? Did her parents assemble the book for her? Did Jane assemble it later in her life and the more mature handwriting is actually hers? One of the items in the book is dated 1827, after she had been married for 13 years, and was given to her by someone (the name is indecipherable) as a parting gift.

However, I believe I have solved one question which is how this tiny book ended up in Queensland.

Jane married Francis Jack Needham (Black Jack) in 1814 who became the 2nd Earl of Kilmorey in 1822. They lived at Mourne Park between Belfast and Dublin and had three sons Francis Jack, Robert and Francis Henry as well as a daughter Jane Selina. Black Jack left his wife, Jane, in 1835 causing a big scandal as he eloped with Priscilla Anne Hoste for whom he had been appointed legal guardian following the death of her father.

The front of the envelope to ‘Ma charmante, aimable Jeannette’ and the back with the seal’.

… had a wish to go to sea (having very little idea of what a sea life was!) so my father indentured me in 1862 to Messrs. McKinlay & Co. of Glasgow, and I signed apprenticeship Indentures …. 4 years’ apprenticeship.

He sailed on the Alfred the Great to Sydney, China and the Philippines under the command of  Captain Loutitt ‘a very rough hard crust, [who] was a terror to everyone – made ship a hell afloat.’  The trip to Sydney took 147 days and they stopped nowhere en route which meant they had to rely entirely on the ship’s stores which was ‘dreadful beef and pork, pea soup and London Pantales (biscuits) which was full of weevils and grubs.’

Close up of the bark of the Aligator Pear tree and the branch of a tree.

When they finally arrived in Sydney, Francis enjoyed his time there. But some of the crew ‘bolted’ once they arrived and were arrested, only being brought back to the ship in handcuffs on the day the ship sailed for Shanghai ‘… where they bolted again and we saw no more of them.’  After many more adventures at sea, Francis finally returned to England and in his memoir explains that he spent a good deal of time with his grandmother, Jane, and his Aunt Selina who were living at Lansdowne Lodge in Putney, Surry. By this time Francis had finished his apprenticeship and he and his brother Charley decided to go to Australia.

His grandmother died on 25 July 1867. Francis was still in England and perhaps his grandmother gave him the little book before she died, or Aunt Selina gave it to him after her death. I can only imagine that he packed the tiny package up with his other luggage and it travelled with him on the Storm King to Brisbane where he arrived in November 1868.

He carried it with him around Queensland and finally to Sydney during the 60 years he was in Australia and on his death in 1928, the book must have been passed on to Francis’s daughter, Sybil Needham, my grandmother, and then to my aunt, Sybil’s daughter. If my aunt was still here, I could reveal what I have found and perhaps she would have been able to add to the story.