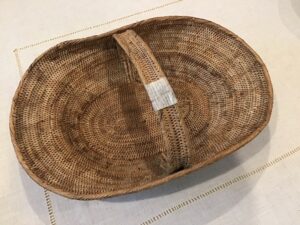 The beautiful basket once owned by Peter’s mother; would their grand-children treasure it as they do?

A year ago I wrote a cheerful 1200 words about the joys and mysteries and fun and learning of being a non-family historian travelling on life’s journey with a heavy hitter in the field. This year I’m thinking on somewhat more serious lines.

The continuing COVID-19 pandemic has certainly had a huge impact on Australia, with nearly 72,000 cases and over 1,000 deaths, nearly all in New South Wales and Victoria, and huge social and economic disruption. It seems to me that the State and Territory governments and health services have, by and large, sought to work with each other in combatting the virus, while still prioritising their own residents/citizens. (Although, to be honest, “Yes, there’ll be deaths but at least you’ll be able to go to the funerals” is not the most helpful advice we’ve heard from any politician.)

So what has been the impact of COVID for us personally? In most ways, not a great deal. We have not lost anyone to the virus, nor had anyone hospitalised. For this we are deeply grateful. Since we are both retired, we have not suffered work impacts ourselves. My nephew, who moved from Queensland to Sydney some months ago and lives in one of the local government areas most impacted by lockdowns, is frustrated by the fact that if he lived 500 metres away in this direction or that, he would have faced no restrictions at all. As it is, given the nature of his work, his employer had to obtain specific government approval to move their workforce to hotel accommodation in the CBD so that essential work could continue. Our eldest daughter has had work-from-home become a routine element of her work and this is likely to continue.

Thanks to NPS MedicineWise for this image. https://www.nps.org.au/coronavirus

Our two Darwin families have had the fewest and least frequent restrictions. We are grateful that a trip to the Territory for a birthday celebration was able to go ahead, with some changes, earlier in the year and that this included seeing the Darwin mob “up close and personal.” We won’t be able to do this again any time soon – health issues here mean that travel is very problematic anyway and there is always the risk that one or the other jurisdictions will find it necessary to close borders or impose other restrictions and leave travellers stranded for weeks. The biggest disappointment, apart from not seeing the Darwin mob, is being unable to travel to see our eldest grandson’s NT basketball team playing in the national championships next month (they’ve already been postponed and transferred from Perth). Thank goodness for live streaming!

Which leads me to the changes I have seen, as a non-family historian, in how the industry (if that’s an acceptable catch-all phrase) is dealing with the limitations. The biggest shindig of them all, RootsTech in Salt Lake City, may well be gone for good in its previous form (this is purely personal speculation). On the other hand, there seems to have been an enormous boom in the use of Zoom for society activities including meetings and presentations. For instance the Genealogy Society of Queensland (GSQ) has an extensive Zoom presentations list and is holding seminars via this medium, Lake Macquarie Family History Group, which I see via  Jill Ball AKA @geniaus has lots of online events. Locally, CFHRI, Caloundra Family History Research Inc, to give it its full title, is blessed with a smart tech-y person who is also one of the three mainstays of the Twitter conversation AncestryTime for Australia and New Zealand. Shameless promotion here for @ANZAncestryTime hosted by @sharnwhite, @travelgenee and @cassmob! 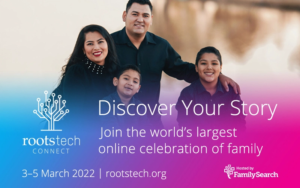 And of course, there are expanded opportunities for international co-operation, presentations, seminars, whole conferences. An advantage is that most are recorded (doesn’t that word date me?) and available when you wish – although that may be For One Fortnight Only! A further good thing about on-demand viewing? You can just replay the incomprehensible Scottish-Irish (or whatever) bit you didn’t quite catch the first time, instead of sitting in a lecture hall scratching your head.

Oh, if you were wondering, we were both COVID-vaccinated as soon as this was possible. We are both in a vulnerable group and we trusted the science. To take a more family history view:

I remember my (fortunately negative) 1961 Mantoux TB test;
I can still see the scar from my 1960 smallpox vaccination;
I remember lining up to receive my two doses of Sabin polio vaccine in 1957;
I remember my aunt’s stories of my grandmother pushing her eldest son (born in 1916) in a pram for years because of the polio which crippled his legs, until treatment enabled him to walk; 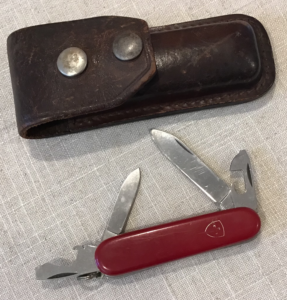 The Swiss Army knife and pouch that Peter inherited from his father.

Further back, Pauleen has written about her great-grandfather’s 1888 refusal to allow a child to be vaccinated because an older child, who had been vaccinated, went into convulsions and died within a few days. Mr McCorkindale, who was of the view that this was because of the vaccination, was imprisoned for his stand. He was not an anti-vaxxer or a denialist; he had, obviously, been willing to have a child vaccinated, but was simply not prepared to risk another death.

Our homestay has also prompted us to start looking through, sorting and in some cases despatching “stuff”, which of course leads to thinking about the origin of the item, whether to keep it, who might value it. For instance, I have my father’s Swiss Army knife, which lives in a leather belt-pouch which was certainly my grandfather’s (from his service as a fireman with the Melbourne & Metropolitan Fire Board?) and possibly, although far from certainly, his father’s. Would our eldest grandson be interested in an item which would have some immediate usefulness but also provide a connection back through five and perhaps six generations? Would our grand-daughter treasure her great-grandmother’s hand-made Papua New Guinea Buka basket? Lots of consultation needed, because one day (getting closer all the time!) we won’t be able to.

That’s probably enough for now. Thank you for coming along. If I’m here next year, which would probably enable me to describe this as a series, see you then!

Disclaimer: The views of the Author are not necessarily those of the Genealogical Society of Queensland