Bell’s Picnic Party was the title of a small piece in The Worker in May 1908. It expressed the newspaper’s view of a trip my great uncle, Joshua Bell, who was Minister for Lands at the time, was taking along the Queensland coast in May 1908 on the Government steamer Lucinda.

Mr. Bell, in the fostering atmosphere Ministerial authority, is developing a great gift of conviviality—at the country’s expense…taking with him a few chosen pals and political tuft hunters…[1] 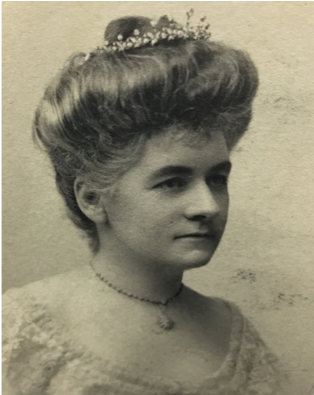 Accompanying Joshua on this trip on the Lucinda was his wife Catherine Bell who I wrote about in my last post in her role as the Queensland president of the National Council of Women in Queensland. In fact in August 1907, Catherine Bell had actually entertained delegates of the National Council of Women with a trip down to Pinkenba on the Lucinda so they could meet the Tasmanian delegates Mrs Dobson and Mrs Bennison.[2]

Catherine kept a scrapbook during this period of her life and in it, there is a short description of this trip up north.[3] As well as Catherine, Joshua took his mother, Margaret Bell, his sister, Maida Bell,  and Catherine’s daughter from her previous marriage, Kitty Jones, as well as politicians, public servants and a poet from Toowoomba, George Essex Evans.  It must have been a real adventure for Catherine but I cannot imagine politicians taking their extended family on a similar trip now! 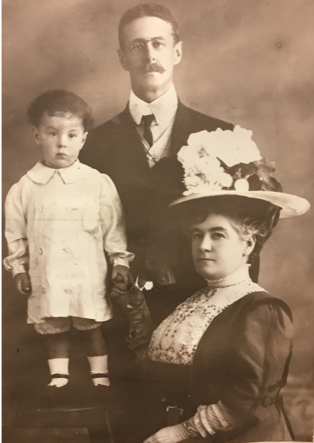 Catherine and Joshua Bell with their son Joshua

They boarded the Lucinda in Rockhampton on 26 April 1908, about 6 weeks after Catherine had given birth to her daughter Margot (the baby does not appear to have gone with her)!  Joshua planned to see the country on the Bloomfield River (west of Cooktown) and ride from the terminus of the Chillagoe rail line to Lyndhurst and then end up at the coast at Ingham. The intention was that this country would be opened up by a proposed road up the range to Mount Fox. He was also planning to see the Evelyn country south of Herberton where there was planned land settlement.[4]

Catherine’s record of the journey commences:

As we journey northwards air becomes  warmer. The men of our party sleep on the mattresses on deck. Mr Selby-Lowades is over the fowl coup in our farm yard. He did not know till he was awaken in the small hours of the morning by the crowing of the roosters beneath him. There are several couples of turkeys, ducks, etc. Sad to say their numbers become less each day.

They travelled up the coast to Cairns and then to Port Douglas where, after Joshua attended a reception, they set off inland.

After passing on the tram car though miles of corn we came upon Mr Low’s house. In his garden are beds of most beautiful & brilliant crotons. Their colours so fresh and vivid that cannot be obtained in a less hot climate. On to Mossman’s Mill which we inspected to the manager’s, Mr Thomas, house.

Rowed about 16 miles up the river in boats – it was a heavy pull for our sailors who are not accustomed to pulling long distances & we landed & walked some miles – we visited the township of Cryton (?) & the school – Joey gave the children a holiday & Mr Douglas their member a large tray of sweets. The teacher Mr Rentoul had not left the place for 6 years. We saw the falls –  & returning our boats were laden with coconuts, oranges, mangoes, some from deserted gardens.

…Flags waved across the Main Street & colours red white & blue adorned the horses that pulled our cabs. The Mayor Mr Seagren & Mrs S received us with others. She was exceedingly kind & anxious to please us, called us dearies. We drove 6 miles on the road …to see a bridge that had been wrecked in a cyclone …our coachman was a typical colonial bush youth – the road was rough with holes & wash away. Mrs Seagren told him “to drive careful as we did not want to be shook up” to which he replied that he had the brake on as far as it would go, which may have been the case, but it did not slacken the pace.

They returned to Cairns, visited the Atherton Tableland and then travelled to Herberton which was

…1000 feet higher. We women were put into a buggy again. A fatal mistake where anyone of them is nervous. Stories of accidents happened on various points always just ahead of us were recorded to us who listened with hearts in our mouths & eyes fastened only on the horses & and those particular points, waiting for the end, (whichever it was to be). The road was decidedly bad, as steep as a wall in places with a hill on one side & a precipice on the other, and cuttings & holds at every turn. At last the “right” end came. Herberton was reached & we felt we were in another state, quite out of Queensland with a sharp clear wind fanning our faces, too light to blow – bracing & thoroughly pure. We rested well. 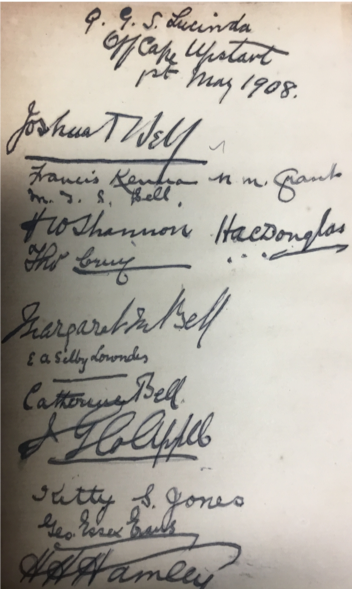 Signatures of passengers on the May 1908 voyage of the Lucinda

Joshua, Essex Evans and Mr Hamly (Engineer of Public Works Improvement Fund) left Mareeba on the train which then only went as far as Mount Surprise. From there they drove to Einasleigh where they had to proceed by buggy, horseback and car to Lyundhurst,  Spring Creek Station, the Valley of Lagoons,  Kangaroo Hills and then on to the plateau surrounding Mount Fox where they were proposing to build a road.[5] After reaching Ingham they rejoined the Lucinda. The whole trip was 350 miles and they rode 200 miles. At Ingham the local children were taken on a trip on the Lucinda.[6]

They returned to Cairns on the Lucinda and then visited the Aboriginal Mission Station at Yarrabah which Catherine described in glowing terms.

…greeted by Mr Rev Gribble & the natives themselves.  – the station is off Cape Grafton 4 miles & we were taken across in their motor launch. The natives were all clothed in their native costumes… The reds blues & yellows of the costumes of the men women & children grouped as they were under clusters of coconut palms on the vivid green grass between the blue of the sky & the yellow white beach, & the rich blue sea formed a fascinating picturesque scene. They are very happy people, and the way they speak of Mr Gribble as Dada & cling to his arms & knees, shows how attached they are to him. We spent 6 hours there looking though all the buildings and watching the Samoan dances taught by Douglas and Mary to Samoan natives, who have built their own native grass house, & have decorated with Samoan curiosities.

Catherine’s description mirrored the general support for the grim policy at the time of removing Aboriginal people to live on mission stations. Despite what Catherine said, Reverend Gribble  had a dubious reputation.

The Lucinda must have meant something to Catherine Bell because many years after Joshua’s death she attended the auction of the furnishings of the Lucinda when the steamer was sold in 1923. She bought the ship’s bell and ‘…it hangs now at my home, untouched by paint or cleaning cloths – just the ‘Lucinda’ bell, with the stains of the sea salt still on it.’   After the auction she walked to the water’s edge to look at the hulk and ‘My eye followed along her deck to the Figure Head and I felt I wanted to buy it, to save it. It was not for sale.’[7] Before Catherine died, she donated the bell to the Royal Historical Society of Queensland and it is still in their collection.