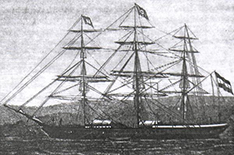 Did you wear crinoline, I wonder?  Layers of petticoats that weighed you down and a corset that constricted?  How did the swaying deck of the three-mast barque-rigged Reichstag feel under your feet?  How did you care for, and keep safe, a 9 month old child,  born in Bismarck’s newly created Germany, on a four month voyage from Hamburg to pre Brisbane Moreton Bay?  Or even on an overland journey to the tiny Darling Downs community of Meringandan?

Were you Jewish, ‘marrying out’ and escaping an anti-Semitic 1870s Europe with a new husband and child?  As your great great granddaughter, I know your pre-married name was Schaller.  Could this be a clue to your ethnicity?  Your family name appears, page after page, on Yad VaShem’s Central Database of Shoah Victims’ Names VER. B-110.2.  Is it possible that the choice you and your husband made to emigrate could be seen as a courageous, pre-emptive act that saved your descendants from the horrors of 1930-40s Nazi Europe?

On almost every document I have seen you were called Rosina, so unless any of your descendants saw your naturalisation records (National Archives of Australia NAA: A1, 1913/18900) it would be nearly impossible to know that as Annie Maria Rosina, you were identified using your Rufname, a practice those with German ethnicity brought with them from their homeland.  Could you have guessed that your descendants would continue this naming pattern for at least five generations?

What would the land, the flora and fauna and natural light in this country, so far removed from your native place, look like to your Swiss German eyes?  How would you process the sounds, such as a kookaburra’s laugh or the shrieking of galahs, that assaulted your ears?  Or the food, it’s taste and texture?  Did you make new friends, with those who shared your cultural background or those from countries with which you were unfamiliar?  Did you understand their strong accents, alternative ways of dressing and varying opinions on subjects with which you were or were not familiar?  Could these new friends provide you with the support you would obviously need as you gave birth to nine of the 10 children that were born in your adopted country?  Were birthing practices in the relatively new state of Queensland the same or different, more advanced or more primitive, than those to which you were accustomed?

Your husband, Johann, built a school for the local community in the early 1870s.  Were you involved in the school community?  At a time when small towns were responsible for raising funds, locating educational resources, sourcing teachers and providing accommodation for them, as a mother of 10 children of your own, how could you have the time and energy to contribute to the development of a school?  As a mother of 10 how could you not take action to provide for the formal education of your family?  To offer them every opportunity to build a better life, for which you and your husband worked so hard?

Family lore says Johann, who was called John after your arrival, was a teacher in the old country but could not get work as an educator here in Queensland.  Land documents (Queensland State Archives Item ID59521, File – land selection) reveal that the family was not able to survive as farmers due to drought and locust plague.  Johann then, as pragmatic as Germans are known to be, put to use the only other skill set he reputedly possessed, carpentry.  Our family now boasts six generations of ‘tradies’, good with their hands and well respected for the quality of their work.  What extra measures did you take Rosina, to feed and clothe your brood, to keep body and soul together for all of you?

What joy did you experience in your life, what sadness?  How did you mourn for the children you lost in infancy?  Were you stoic and just ‘got on’?  You saw your daughter-in-law die in childbirth aged just 23.  Did you care for and support your eldest son and his three children in their time of grief or were you too deeply, understandably, immersed in your own?  What domestic and international events occurred during your lifetime in regional Queensland?  Did you know?  Did you care what was happening so very far away?  What would your reaction be had you known that an infant grandson you possibly held in your arms would serve in the AIF and die during WW1 of shell wounds to his legs?  He died in France, relatively close to Switzerland.  Would this have changed your perspective?

When your life was over and your family laid you to rest in the cemetery near your adopted home, can I assume on your behalf a sense of achievement, completion and a job well done or were there regrets, a sense of loss and worry for your family, for what was to come?

If I could talk to you personally I would hope you would help me with kindness and grace to understand the rich tapestry that was your life.