Regular readers may recall my GSQ blog story William Powell – a man with vision, the founder of Powell Valves which was published in June this year.

This issue I’d like to share the tale of the eldest surviving son of William and his wife Elizabeth Carr.  Henry was born on 17 November 1821 in London and was a first cousin of my great-great grandmother, Harriet Powell.[1] Both Henry and his brother James joined their father in the business that William had begun in Ohio and at the age of 27 years Henry travelled to England probably to extend his business connections.  Whilst there he lived with his Uncle Thomas at Portman Square, Maida Hill and no doubt spent time with his other cousins residing in London during that period. Henry booked a second-class cabin for his return passage to the USA on the Ocean Monarch and set sail for home on 24 August 1848. Of the 398 persons on board for the journey 322 were Irish emigrants as well as the paying passengers, including Henry. 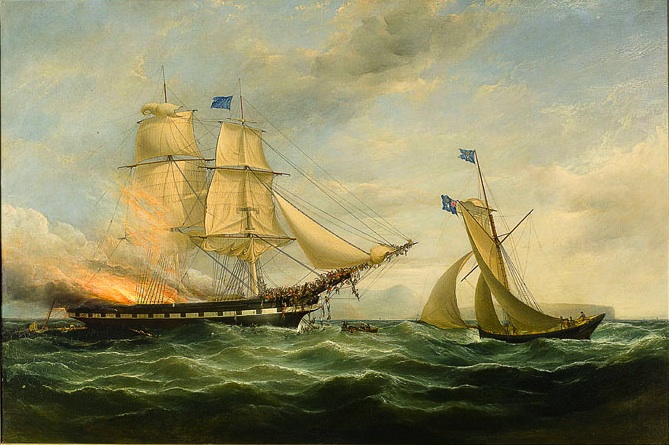 Burning of the Ocean Monarch – oil painting by Samuel Walters.[2]

Unfortunately, the barque caught fire about 5 miles east of Great Orme Head near Conwy in North Wales. You can imagine the panic that would have followed, and the terror they felt. All control of the passengers, who were desperately clinging to the remaining parts of the vessel was lost. The crew of Ocean Monarch only managed to release two of the three lifeboats before the third one caught fire. The last thing the Captain and three crew did was to throw overboard a topgallant yard, with a rope attached to it to make it fast alongside, and the passengers were then told to jump into the sea and cling to it.[3] Eventually all passengers, crew and the Captain had to jump into the sea and cling to this.

Mr Littledale, Commodore of the Royal Mersey Y.C, was returning to Liverpool in his yacht Queen of the Ocean, and saw the flames.  Commodore Littledale managed to save 32 people.[4]  As well as that vessel, the ships on the scene by then were Affonso, a Brazilian frigate (saved 156), the Prince of Wales (17 saved), a fishing smack (saved 13) and the American packet New World.

Henry Powell was quoted in the closing section of the Illustrated London News article that he and fellow passengers onboard one of the lifeboats were initially picked up by the boat Pilot Queen.[5]  The crew of that vessel picked up from the ocean several boxes and a trunk belonging to one of the cabin passengers and insisted that these be left onboard, after the passengers transferred to a fishing smack returning them to shore. The survivors resisted this proposal and the quarrel arose when one of the pilot boat crew threw the trunk into a small boat and rowed away.

Henry had a blanket around his neck and one of the seamen grabbed it, trying to wrench it away, so Henry gave the seaman a silver lever-watch instead. The survivors were then allowed to leave. The smack took the survivors to Liverpool, and after telling their story to the authorities, some of the pilot-boat crew were arrested and Henry’s silver watch was returned to him. Many of the newspapers around the world relayed the shocking event. 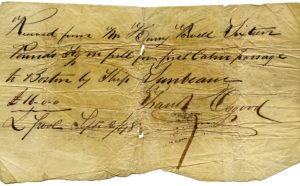 Despite this disastrous beginning, Henry was determined to continue his passage home and rebooked his passage on 2 September on the vessel Sunbeam which arrived safely in Boston on 9 October 1848.[6]

He sailed once more to England the following year returning home onboard the Abbey Land arriving in New York from Liverpool, England on 1 May 1849. He was not recorded in the 1850 USA census or indeed the English 1851 census so may very well have been travelling once more in connection with company business.  During these visits to London it appears he met members of his uncle’s extended family including the Berralls who were much the same age as Henry.[7] His uncle Thomas Powell had married Isabella Berrall initially, and then after her death, he married her sister Elizabeth. Elizabeth had many nieces and nephews residing in London by that time and her brother, William Faulder Berrall, was a particularly close friend of Thomas. 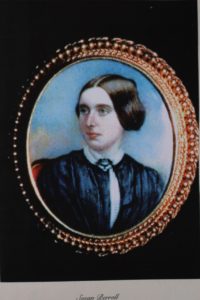 One of William’s daughters particularly caught Henry’s eye and a romance with Susan (sometimes called Susanna) was formed.  On his marriage certificate Henry’s occupation was shown as Merchant. He married Susan Berrall, the daughter of William Faulder Berrall and Mary Skrine.[8] The couple married by Licence on 24 July 1852 at St. Marylebone, Middlesex with witnesses to the ceremony being his uncle Thomas Powell, William Berrall and Mary Berrall (both Susan’s siblings). Susan was shown as a minor.

As Susan was under legal age, a Marriage Settlement was agreed upon.  The document dated 4 September 1852 is four large pages written on velum and is still in the possession of one of the descendants today.[9]

The Settlement stated that Thomas Powell and Charles Berrall (Susan’s brother) were the Trustees of the bond. This Settlement was drawn up as following the deaths of Susan’s father and grandmother, she had inherited two large sums of money, totaling three thousand six hundred and fourteen pounds (£3614) whilst a minor. The Trustees subsequently invested this sum on her behalf.

As well as this precious document, Susan’s family have a beautiful small enamel broach with her painted portrait on it surrounded by yellow gold. On the rear is inscribed ‘Susan Berrall. Born Dec 23, 1831. Painted by W. Essex. Enamel painter to Her Majesty & H.R.H. Prince Albert 1852’.  Many thanks to Susan & Henry’s descendants for sharing this image here. 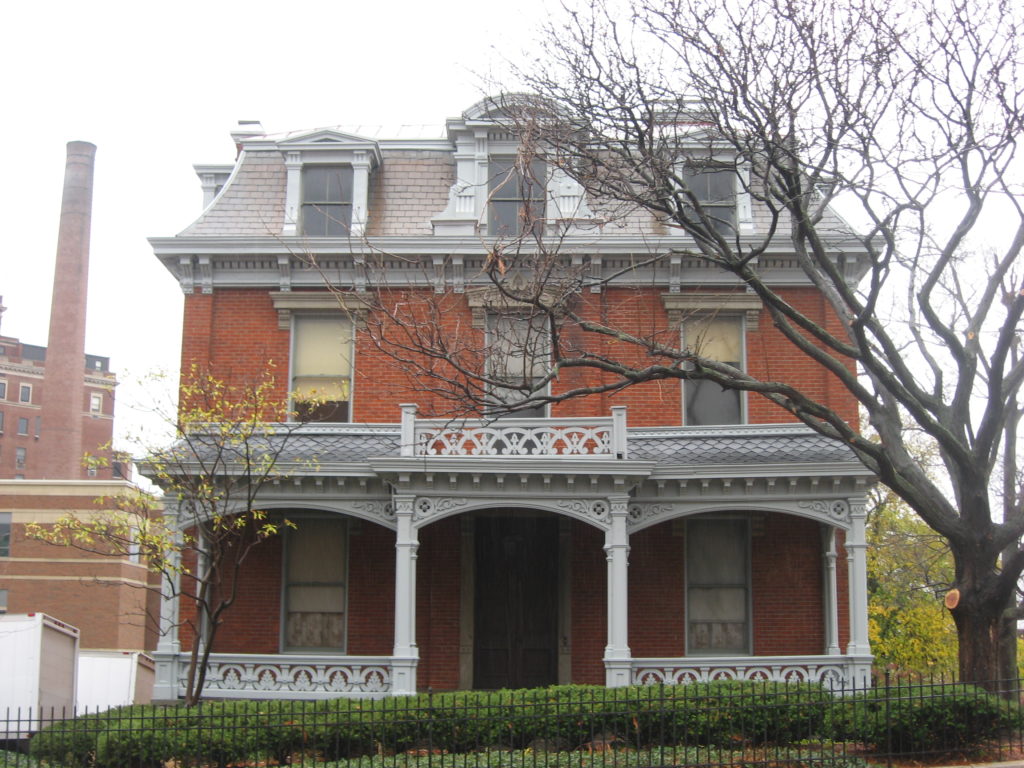 The couple returned to America by July 1860 when the census showed an entry of them in the household of Robert Lachlan, a 76-year-old Major of the British Army living in Cincinnati. The Major had a servant listed as well as Henry and Susan who were noted ‘ditto’ under the servants’ name with the couple born in England. This appears to be an error as Henry was working in the family business and my thoughts are that the couple were visiting family friends.

The first child was born on 15 June 1862, a son, whom they named Henry Spencer Powell.[10] A second son, Walter Berrall Powell was born shortly after on 18 January 1864, their only daughter, Mary Skrine Powell was born on 21 October 1867, followed by their last child, Ralph Carr Powell in 1869. The family was living in Cincinnati, Ohio for all four births.[11]

Henry had joined his father’s company and by 1870 is shown as Brass Founder living with his wife and four children plus two young female servants in Cincinnati, Hamilton, Ohio. [12] The value of his real estate was $32,800 and his personal effects declared at $15,350. Ten years later in 1880 he was still a Brass Founder and the children all remained at home although Susan is noted as being ‘In Europe’.

At the end of May 1888 Henry and his daughter Mary, then aged 20 years travelled to Europe for six weeks.  In early July his family in Cincinnati received a letter from him written in London letting them know that he and Mary were about to go to Europe and that his old ailment, dyspepsia, had returned. Sadly, the letter had taken some time to reach the family, and on the following day, news was received from Britain that shattered his loved ones.

The headlines of The Cincinnati Enquirer tell of the tragic event that hit the family, Henry had taken his own life.[13]

Jumping off the Servia When Fifteen Hours Out From Liverpool

His Thrilling Experience in the Same Waters Forty Years Before

He Rationally Walked the Deck With His Daughter, Wrote a Letter, and Then Plunged Into the Waves, Which Swallowed Him 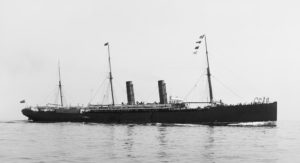 It seems that whilst onboard the Servia returning to America, Henry and his daughter had dined together on the evening of 2 July 1888, before Mary retired to her cabin.  Her depressed father had walked the deck alone for several hours before disappearing, with no one witnessing the event. A letter found in his room was addressed to Captain McKay who relayed the news.  The suicide note requested the Captain look after his daughter during the voyage, and also intimated that his declining health had made him weary of life. It may be more than a co-incidence that the event happened in the same vicinity as the burning of the Ocean Monarch. Did Henry carry a feeling of remorse for the lives lost in that tragedy, while he was saved? My heart goes out to Mary, who must have been totally devastated to lose her much loved father, and was left to continue the journey alone in her grief. 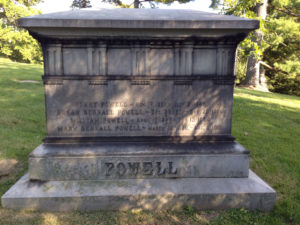 Henry Powell had written his lengthy Will on 22 May 1888, and Probate was awarded to Susan Powell, Executrix and Henry Peachey, Executor on the 24th day of July 1888 at the Hamilton Probate Court, Hamilton County, Ohio. [14]  Following Henry’s death, Susan moved out of the family home and into 2 Huntington Block, Cincinnati in 1889, but by 1890 she had returned to “The Auburn” Mt. Auburn and was described as a Widow.[15]]  In the 1900 census she is shown as a widow and the head of household.  Living with her was her unmarried son Walter and also daughter, Mary along with her husband John Anderson, and their two children. [16] Susan passed away aged 75 years on 20 Dec 1906 and was buried at Spring Grove Cemetery, Cincinnati, Ohio three days later.[17]  Henry is remembered on Susan’s tombstone at Spring Grove Cemetery.

[3] Top-gallant yard is a spar on a mast from which the sails are set. Topgallant is the sails themselves.  https://en.wikipedia.org/wiki/Yard_(sailing)

[7] Elizabeth Berrall was Thomas Powell’s wife, baptised on 4 May 1783 at St Marylebone, London.

[9] Janie Sommer has provided much of the information on Henry Powell’s family. Many thanks to Janie for her generosity.

[14] A copy of the Will, Probate & Affidavits etc made by the Hamilton County Court is held by a family member today (May 2014).