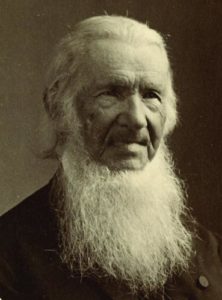 This wonderful portrait is of William Powell, the father of the USA branch of the Powell family from Loughborough, Ghent and Tiverton. Imagine my surprise when one of my extended family sent me a link to a website containing this photograph of their ancestor.  William was the brother of my 3rd great grandfather James Powell, and therefore my 4th great uncle.

I had been researching my Powell family for many years, primarily because it was one of those family lines that always drew me back to find out more about their stories. Born in the Leicestershire lace-producing town of Loughborough to a Baptist Non-Conformist family on 9 February 1790, I have six siblings that I have managed to link together through circumstantial evidence, albeit without any baptism details for any of the six.[1] William is the second oldest of the siblings. More about the photograph comes to light at the end of my tale.

William married Elizabeth Carr on 26 September 1815 in All Saints Church, Loughborough.[2] Elizabeth was the daughter of John & Alice (nee Robinson) and had been baptised on 07 January 1795 at the Broad Street General Baptist Church in Nottingham, a town just 16 miles (25km) north of Loughborough.[3]

During this period the Industrial Revolution was taking place and there was a movement of workers called the Luddites, protesting about the mechanism of many home based industries, including the making of lace. About 1812 or so John Heathcoat, with his partner John Boden, opened a factory in Loughborough that produced lace on bobbin-lace frames. The result was many home based lace workers and their families who depended on ‘piece-meal’ production, were put out of work. On the night of 28-29 June 1816 the Luddites attacked Heathcoat & Boden’s factory in Loughborough wrecking many of his machines. 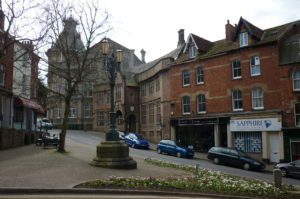 Angel Hill in Tiverton. Photograph by author in 2015

However, prior to this Heathcoat had decided to relocate south to Tiverton in Devon and purchased a disused cotton mill there. Following the Luddite attack he moved his base to Tiverton. Tiverton is a pretty town on the River Exe surrounded by hills and about 14 miles (24 km) north of Exeter. At least two, and maybe three of the Powell brothers had previously worked in the Loughborough factory and relocated to Tiverton shortly afterwards. They were William, Daniel and possibly James. From records in the Tiverton Museum Daniel Powell & William Powell had positions within the Heathcoat Factory.[4]

William and Elizabeth were living in Peter Street, Tiverton in 1817 when their first son was born, and in 1823 the three brothers set up a lace-making business in Ghent, Belgium.[5] This likely involved travelling to London and then Woolwich where they boarded a vessel to the port of Ostend (Oftende), about 40 miles (64 km) west of Ghent (Gent).[6]

1853 map of route, sailing from London to Ostend then overland to Ghent

In various census returns William stated that their second son was born in London in 1821. This was confirmed in the 1827 Ghent census when William said he first lived there in 1823 and that he was a Fabricant, the stated occupation of brothers James and Daniel Powell in this same census.[7] William and Elizabeth went on to have seven more children while living in Ghent. Sadly three of their infants also died during this period. William was a witness to the birth registration of Daniel Powell, the son of Daniel and Ann Powell in 1832. At this time he was living at St Margarete Street in Ghent. In the 1833 census the family was living at St Joris Straete 41 Gent.

The troubled political times in Belgium obviously had a huge bearing on the Powell families and their trading ability.[8] James Powell and his wife Harriet returned to Loughborough in the two years following 1832 and both died there in 1834 and 1835 respectively.[9] Younger brother Daniel passed away in Ghent in 1834 so his widow, Ann and their children returned to her hometown of Tiverton in Devon.[10] & [11]

This left William, the senior Powell brother, to decide his destination and it seems that the United States of America held the most opportunities for his skills. On 5 May 1835 the family arrived in New York on the Brig Governor Brooks which had sailed from Antwerp in Belgium, which is to the north of Ghent. The shipping manifest shows that the family consisted of William (45 yrs), Elizabeth (40 yrs), Henry (13 yrs), Elizabeth Jnr (11 yrs), William Jnr (8 yrs), Thomas (5 yrs), James (3 yrs) and Arthur just 5 months with William Snr., Elizabeth Snr and Henry being English born and the remaining children all born in Belgium. 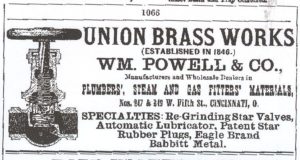 William and his family settled in Cincinnati, Ohio by 1840, however youngest son Arthur died shortly after.[12] It was here that William set up a manufacturing company that was a great success with the family employing 1 or 2 servants in subsequent years.

From an article in Sketches and Statistics of Cincinnati, I learnt that William Powell & Co., Union Brass Works, made every variety of brass and silver plated cocks for plumbers’ use.[13]  The company also made brass work for engine builders, distilleries, and stop cocks, still cocks, oil globes, gauge and cylinder cocks, etc.  Powell & Co. were patentees and manufactures of the elastic plug faucet, adapted to either cold or hot water and designed to withstand injury by frost. 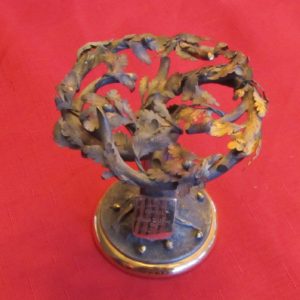 As his three surviving sons grew of age, William Jnr became a Commercial Produce Merchant and both Henry and James decided to join their father in the company. The company prospered and William purchased several properties in the Cincinnati area. On the occasion of William & Elizabeth’s 50th wedding anniversary in 1865, their children presented them with a gold engraved tree. This beautiful gift is a treasured memento that is held in the family today. 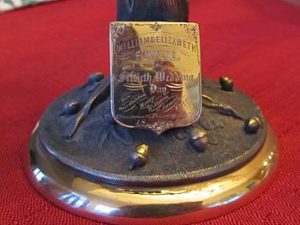 William’s wife Elizabeth passed away on 27 September 1869 at 542 W 8th Street, Cincinnati with cause of death shown as heart and old age. Elizabeth was buried at Spring Grove Cemetery in their home city. [14] Shortly after her death William moved in with his son James and ten years later in 1880 he was living with his eldest son William. William Snr passed away at 368 W 4th Street Cincinnati on 27 March 1881 aged 91 years and was buried at Spring Grove Cemetery with Elizabeth.[15] 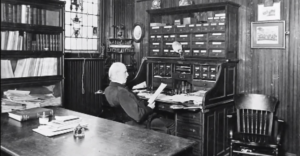 Worker in the office of Powell Valve Company. About 1930

William had signed his last Will and Testament on 22 August 1870 and in it he left a small bequest to the American Baptist Missionary Union and another to the American Baptist Home Mission Society.[16] His three houses on Clark Street, Fourth Street and Eight Street were separately mentioned. Daughter Elizabeth inherited the property on Fourth Street free of any encumbrances. The house on Eight Street was in the name of son James with William having an interest in the property. This interest, equitable and beneficial as well as legal, was to be transferred to James. The remaining balance of the estate was bequeathed equally to his three sons, Henry, William and James and their heirs. A Codicil was written on 22 December 1870 concerning the property on Eight Street. William held a note of two thousand dollars payable by James in two years and William desired that the note be held in trust for the children of James.[17] 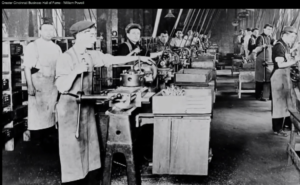 Inside the Powell factory about 1930

Since his death William’s legacy lives on. In 1937 a new factory was built on Springrove Avenue for Powell Valves as it was then trading and at the time it was a leader in conditions.[18] The workers could not believe that even their comfort was taken into account with heating provided for the harsh Cincinnati winters. This was unheard of in this period.

The company William founded continues to trade to this day on an international basis, and on 10 October 2013 William Powell, founder of the Wm. Powell Company (Powell Valves), was inducted into the Cincinnati Junior Achievement Hall of Fame. He and five other inductees were honoured for their exceptional careers and contributions to the quality of life in their community.[19]

In closing I would like to thank my ‘Genie’ friend, Janie, a direct descendant of William Powell. Also thanks to Powell Valves for their permission to use the wonderful photograph of William and those contained in the YouTube video of his induction into the Hall of Fame and encourage you to watch the company story.

[16] A copy of the Will, Probate & Affidavits etc made by the Hamilton County Court is held by a family member today (May 2014).

50th Wedding Anniversary gift of gold tree: Item held and photographed by family member. Permission to use held by author.