I have several ancestors named Joseph Stirland. This post concerns my 2 x great grandfather, son of William Stirland and Dinah Hofton. He was born into a coalmining family in June 1816 in Cotmanhay, Derbyshire and, like his father, became a coalminer. He was born at a time and place when men were transitioning from the increasingly mechanised industry of framework knitting to the rapidly developing coalmining industry.

The Stirlands and related families were non-conformist and this perhaps explains why Joseph’s baptism didn’t occur until June 1837 at the Wesleyan Methodist Church, Ilkeston, Derbyshire, when he was 21 years old. The villages of Cotmanhay and Ilkeston in Derbyshire lie close to the county border with Nottinghamshire, both situated much closer to Nottingham than to Derby. It is likely that, for marriages and other family events, the family moved back and forth across what was a fairly invisible county boundary.

I was able to track Joseph through the decennial censuses. Beginning in June 1841 he was living at home in Cotmanhay with his parents, William and Dianah, and 3 siblings: John, Selina and Mary, all born in Derbyshire. All the males in the family were coalminers, while the females were working in the textile industry as lace runners. According to details in an old occupations website, lace runners were generally young women who embroidered patterns on lace.[1] It seems probable that Joseph grew up amid an extended family, as at least two other Stirland families lived close by in Cotmanhay, including William’s father, another Joseph, who still worked as a framework knitter.

As most of my paternal family abandoned the framework knitting industry in favour of coalmining, I was intrigued to find out why. Framework knitting was originally a home-based occupation, and many workers were paid on a “piece rate”, i.e. they would have been paid only for what they produced. While it was regarded as a male occupation, it’s likely that all members of a household would be involved in some way. Framework knitters produced stockings, and a wide range of lace articles, such as shawls. The three counties of Derbyshire, Leicestershire and Nottinghamshire each focussed on a different fabric: Nottinghamshire, in particular, was, and still is, renowned for its machine-made lace manufacture. Derby specialised in silk and Leicester in wool. According to the Leicestershire Industrial Historical Society, “by the end of the 18th century, these three counties contained over 85% of all the frames in the UK.”[2] The Stirlands epitomised the changing industrial times of the mid-nineteenth century when framework knitting became increasingly mechanised in a factory environment.

Three years after the 1841 census was taken, Joseph married Hannah Chambers in August 1844 in Nuthall, Nottinghamshire. They would go on to have 14 children together. The birthplaces of their children show their movement around the area. The children born between 1845 and 1850 were registered in Basford, Nottinghamshire: John; Joseph Chambers; Arthur; Charles; Alfred; and Granville. Arthur and Charles were twins – Arthur died in infancy and Charles became my great grandfather. A further seven children were born between 1852 and 1863 in Ibstock, Leicestershire: Ezekiel; George; Samuel; Mary; Eliza; Anne or Annie; and Herbert. The youngest child Fanny was born in Church Gresley in South Derbyshire. A number of their children died as teenagers or young men in their 20s.

Joseph’s wife Hannah was the daughter of William Chambers, born in 1821 in Awsworth, Nottinghamshire where she was living at the time of the 1841 census. I still have more research to do on Hannah’s antecedents at the time of writing.

Joseph progressed in his career by moving around within the Nottinghamshire, Leicestershire and Derbyshire coalfield. From being a coal miner in Cotmanhay in 1841, he was working as a colliery bailiff in Ibstock in Leicestershire by 1851. I researched the logistics of moving a family of five small children and household goods the 30 miles (45km) between the two locations and the most obvious form of transport would be walking, with goods piled on a cart although part of the journey could have been by canal. The journey would have been quite an undertaking in the late 1840s. It’s always possible that as a colliery bailiff Joseph could have afforded to hire some kind of horse-drawn wagon.

The coal mine in Ibstock may have been newly opened or expanded. Joseph, as an experienced coalminer, could have been headhunted to take on the role of bailiff. The Durham Mining Museum provides a list of occupations, which describes the bailiff as a foreman or overman, the person in charge of the workings of a colliery.[3]

He sets the pit to work each morning, and attends to all the detail of arranging the work, and getting the coals each man works to the shaft bottom. It is also his duty to see that each working place is properly ventilated and in a safe state. He also keeps a daily account of the work wrought, and of the whole of the underground expenses and wages, and gives the colliery office a fortnightly account of the same, the bill containing the amount earned by each man, or set of men if in partnership, and boy during that time. There is one overman to a pit, so that if there are two or three pits at a colliery, there are two or three overmen. An overman is almost invariably a man who has passed through all the graduations of pit work, from the trapper upwards, and who has been raised to his situation on account of his ability and steadiness. His wages in 1849 were 26s. to 28s. per week, with house, garden, and coals gratis.

Joseph was still in Ibstock in 1861 having relocated from Coal Pit Lodge to Hugglescote Road and had been promoted again to colliery viewer. A colliery viewer was the most senior person managing the work and ventilation of the mine. Joseph was therefore a very experienced coalminer with significant responsibility for the operation of the coalmine in which he was working. Joseph’s higher status must have been welcomed in the family as it most likely resulted in improved living arrangements, especially if they were provided with a house, garden and coals as part of their employment package. 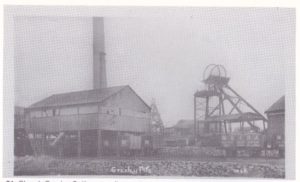 The family moved again later in the 1860s, this time to Church Gresley in Derbyshire, their final home. Joseph was employed by Messrs Gleadow and Company as their bailiff. He was called as a witness on behalf of his employers in the 1867 dispute concerning miners locked out of their jobs. The dispute had arisen partly due to a push to introduce unions into the mines by the Miners’ Union. A lengthy standoff between employers and workers ensued with the coal masters standing firm. They attempted to bring in non-union labour from other areas, but this wasn’t successful. Demonstrations, mainly by women and children, were noisy and prolonged. The men eventually returned to work, primarily due to lack of funds to continue. According to Colin Owen in his book about the coalfield, Gleadow was a strong opponent of unionism and played a prominent part in helping to defeat the union movement.[4] It appears that efforts to introduce unions into the mines were quietly shelved.[5]

The stress caused by the miners’ lock-out may have taken its toll on Joseph’s health. He had retired from coalmining by the time of the 1871 census taken on 2 April when he was only 54 years old. Sadly, he didn’t enjoy a long retirement, dying at age 63 on 12 May 1879. The cause of death appears to be ‘fatty degeneration of the spleen’. 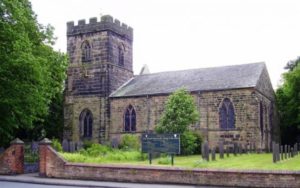 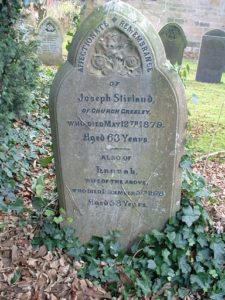 Hannah had died only six months before Joseph on 5 December 1878, aged 57. Her death certificate shows causes of death as fibroid enlargement of uterus 18 months, bronchial phthisis 12 months and bronchitis 10 days. She must have been in considerable pain for a while before she passed away and you wonder whether some of these symptoms were a long term result of having given birth to 14 children, and also living in a relatively unhealthy area due to the mining and pottery industries. Both Hannah and Joseph were buried in St George & St Mary Church, Church Gresley. Their deaths meant that their two youngest children Fanny and Herbert lost both parents before they were 20 years old. Elder sister Annie and her husband Arthur Insley took care of both of them. Herbert died not long after in 1882. Fanny married in 1885 but she was not to have a long life either, dying in 1896, aged only 31 years.

Joseph was the patriarch of a family entrenched in the coalmining industry over several generations. It could be a hard life. My dad, his great grandson, was the last of the line.

[2] Leicestershire Industrial History Society at http://www.lihs.org.uk/framework_knitting_film.html. The Society has a link to a YouTube film showing a modern-day framework knitter using a traditional machine, which shows that it is quite a physical manual process. A Wikipedia article on the stocking frame was also useful for explaining the process, its development and ultimate demise at https://en.wikipedia.org/wiki/Stocking_frame

[5] For reports of the Miners’ Lock-out see Barnsley Chronicle, 21 December 1867 and others, available at British Newspaper Archive (https://www.britishnewspaperarchive.co.uk/), and FindmyPast.co.uk (https://www.findmypast.co.uk/)