Rosetta (Rose) Johnson – Johnston(e) – was born in County Louth, Ireland in about 1773. Rosetta was convicted at the Surrey Assizes – Lent 24 March 1814 [1] and sentenced to “Let them be transported beyond the seas for seven years.” Rose had stolen 18 yards of sheeting, value of seven shillings, and a shawl, value of 30 shillings, in the parish of St George the Martyr in Southwark, aged 29 years. There is no mention of a daughter during her indictment. There are no details available of imprisonment in subsequent prisons or hulks. She was transported to the Colony as a convict in 1815, with her young daughter Catherine on the transport ship Northampton. 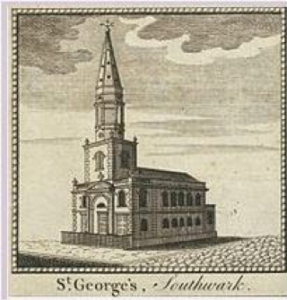 What circumstances brought Rosetta and her daughter to London? Was Catherine born in Ireland or in England? Who was her father? There is no record found for Catherine or Rosetta’s birth at this time.

Rosetta appears in the following:

19 June 1815 –  on the list of female convicts and their children on board the Northampton, just arrived at Port Jackson; with her daughter Catherine. Listed as Rose Johnston [2]; made herself useful on the ship as an attendant on the sick [3].

23 June 1815 – On list of convicts disembarked from the Northampton to be employed at the Factory at Parramatta; with one child [4].

November 1818 – John Beale made a formal application to the governing Committee of the Female Orphan Institution in Parramatta to withdraw Rosetta’s daughter, Catherine, from the institution where Catherine was then living, however, the “Committee did not consider it proper to give the permission.”

Then four months later 14 April 1819, the Female Orphan Institution’s Committee agreed: “That Catherine Johnson be in like manner be discharged to her mother now Beales.” So Rose was without her daughter for three years. [6] I cannot imagine the distress Catherine must have suffered being separated from her mother at the age of six after being with Rosetta throughout the trial, imprisonment and journey to New South Wales.

20 May 1822 – Rosetta submitted a Petition to the Colonial Secretary at Sydney seeking mitigation of John Beale’s sentence. This application was not successful. [7]

We next hear of Rosetta in 1828 and the riots at Parramatta. At the time, John and Rosetta were living in Church Street, Parramatta [8] and John was employed as an overseer to John Raine. Riots occurred at Parramatta on both the 17th and 16th January 1828, resulting in court actions which involved both Rosetta and John Beale. The riots were activated by friction between John Raine, landholder, and mill operators George Howell, who were supported by John Macarthur. At the time the events provided much entertainment for the people of the colony.

At the time of the riots in January 1828, a police constable, Joseph Kerr, was sent to the site and whilst there was assaulted by Rosetta Beal, wife of John Beal. [9] The incident was also reported in the Sydney Gazette of 1st February 1828 [10]. Rosetta was committed to stand trial at the Quarter Sessions held at Parramatta on the 7th April 1828. She was found guilty and sentenced to a fine of five pounds with imprisonment until such fine was paid.

Rosetta was the plaintiff in court actions in the Supreme Court Civil Jurisdiction, in late 1828 and early 1829, with John Raine as the defendant. This was about monies owed to Rosetta for her husband, John Beale’s labour. The Sydney Gazette wrote in some detail about the case [11]. You can read about the case here at the Macquarie University Law School. Rosetta was certainly a strong woman! 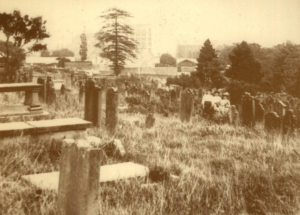 The case obviously created considerable interest in the community at the time. Here was an ex-convict, Rosetta, who took a wealthy free settler, John Raine, to court over monies owing to Rosetta for work carried out by a convict assigned to her, who happened to be her husband! It is interesting to observe that having been transported to the colony for various felonies, both Rosetta and John Beale were relying upon the same justice system that had convicted them, to right wrongs against them.

The Beale family prospered until around 1842 when John made some investments that failed, and he applied for bankruptcy in 1843.

Rosetta died on 13th February 1845 at Blackwater Swamp, now Glebe, inner suburb of Sydney, where she was living at the time of her death. It would be reasonable to assume that the family moved to Blackwater Swamp because of their financial difficulties at Parramatta. Rosetta was buried on 15th February as a Roman Catholic, at the Sandhills Cemetery or old Devonshire Grounds which is now the site of Sydney’s Central Railway Station. 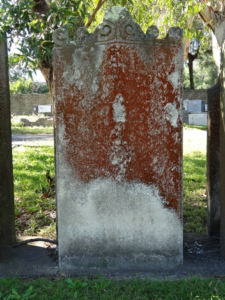 The Sandhills Cemetery was closed in 1888 and by 1901 was very neglected. In that year the area was resumed for the construction of Central Railway Station and the remains it contained, were distributed around various cemeteries throughout Sydney. Many of the headstones at the Sandhills Cemetery were vandalised but fortunately, Rosetta’s headstone was in good enough condition to be relocated at the now Botany Cemetery’s Pioneer Memorial Park. Rosetta’s headstone, which is located adjacent to Read Avenue, is extremely difficult to read but her name is quite legible. The headstone is inscribed as follows: Rosetta Beale, wife of John Beale of Parramatta died 13th Feb 1845, aged 65 years.

I think about Rosetta a lot. I believe she was a tough strong woman who survived in harsh times. She lost her daughter Catherine in 1832 in George Town, Tasmania and did not live to see her grandson, Charles John McCann, married in 1847 in Sydney. Rosetta was my 4th great grandmother.

Perhaps Rosetta’s attributes have been handed down to my family line of strong women – I certainly hope so!