↓
GSQ Blog→Asking for help→Looking for a letter: Elizabeth Hardwicke’s (née Chapman) letter to her daughter Maria

Do many of us who are doing genealogy research think, as we are searching Trove or gazing at microfilm to find that missing link, that one way we may find the answer is to write our story and put it out there on a blog and see whether some distant relative suddenly presents the answer?

Sounds far fetched doesn’t it? I certainly thought so when I started to contribute to this blog. Perhaps I was naive because I thought you only published when you had done all the research and solved all the dead ends. But I have come to realise that blogging presents a slightly different approach where you can openly declare that there are gaps.

I had been researching a number of stories about relatives on and off for some years and was struggling with dead ends. But I thought the stories were interesting so I decided to use a couple of them for my monthly entry to this blog.

The first one was published on this blog in August 2017 and was about my great-great uncle Francis Jack Needham who was a British officer in the Bengal Police and was posted to the Eastern Himalayan region of Assam (the north-eastern state of current India) to serve as an assistant Superintendent of Police from 1876.

I found out a reasonable amount of information on him but one of the questions I had was that although I had found evidence of a son in India, there was no mention of a wife or other children in his obituary or in other records that I found of his life. I felt the story was unfinished but the deadline was approaching so I sent it off with the rather prescient comment at the end of the entry ‘Of course now I want to find out what happened to his son and who his mother was but that will need to wait’.

A few months passed and I thought nothing more of it until one morning in February 2018, six months after my blog entry, I checked my email and there was an email from Cathie Sherwood, the coordinator of this blog, forwarding on an email that she had received from a distant relation who said she had the answer! 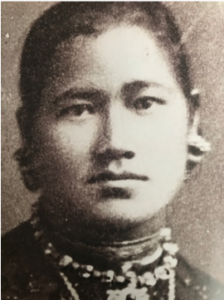 She had found and read my blog and wanted me to know that she had the family tree of the Needham family in India and that my great-great uncle, Jack Needham, was her great-great grandfather! She also told me that Jack had eight children with an Assamese woman. I was so excited to find the missing piece and immediately sent her an email. I now know the Assamese lady was called Mary (her tribal name was Yasi Modi) and I have a photo of her. I also have a family tree of the Needham family in India and some information about their lives which I hope will gradually expand.

The second experience was with a story I did for this blog in February 2018. It was about my great uncle Ossie (Oswald Bell) fleeing to Hong Kong with a married woman Lulu (Louise Taylor), leaving her two small daughters, Lulu and Melody. In my research I had not been able to ascertain whether Lulu had seen her daughters again as she died nine years later on a trip back to Australia.

The reaction to this blog was immediate. I had sent it on to my friend who was related to Lulu and she forwarded it on to numerous relatives. I eventually received photos of the girls about the time their mother died and information from a 99 year old relative who said that Lulu’s husband returned all the presents Lulu sent to the girls and she never saw them again.

So I have solved a number of my dead ends! But now I have another one.

I have just written an article for the June edition of Generation about Sarah Chapman, my great-great-great grandmother who was a convict who arrived on the convict ship the Nile in 1801. The piece was too long for this blog because as the lives of convicts were well documented and she had ten children, there was a large amount of material.

Sarah gave birth to Elizabeth, my great great grandmother in 1802, and Elizabeth eventually moved to Launceston, Tasmania and married Charles Browne Hardwicke in January 1820. She was unable to write (and possibly could not read) as she marked her marriage registration with a cross. She eventually had 14 children one of whom was my great grandfather, Harry Weedon Hardwicke, who moved to Townsville.

A book was written on Charles Browne Hardwicke [1] which claims that after her marriage she [Elizabeth] learned to read and write, obviously under her husband’s tuition: and the evidence of her proficiency is in a beautifully-written letter – which has been happily preserved – addressed to her daughter Maria in 1846. Stewart Anderson, the author of the book, is deceased and there is no reference to where the letter was/is located and although I have searched for it, so far I have found nothing.

I would love to see a copy of that letter as it is so unusual for a family to have a letter from this era and particularly from a woman who had not been able to write at the time of her wedding but had learnt in the intervening years while having 14 children!