As regular readers of this blog will be aware, I wasn’t born in Brisbane, let alone in Australia. At times, I do dip my toes into Australian records, however, and have gradually been picking up more knowledge. As well as my regular activities with GSQ, I also belong to a genealogy group that meets monthly. We take it in turns to set a challenge for the following month and some of these challenges have been awesome in opening our eyes to a wide variety of record sets, in Australia and internationally. I set the challenge for April, which was to research a migrant/migrant family who arrived in Moreton Bay aboard the Fortitude in January 1849 to discern what contribution, if any, these early migrants made to Brisbane and/or Queensland. What a fascinating topic this turned out to be. 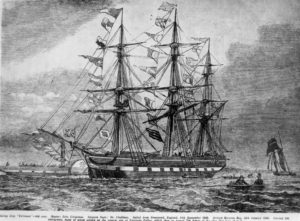 StateLibQld 1 100296. Fortitude (ship). Drawing of the ‘Fortitude’. 608 tons. Master: John Christmas. Surgeon Supt.: Dr. Challinor. Sailed from Gravesend, England, 14 September 1848. Arrived Moreton Bay 20 January 1849. Carried 256 immigrants, many of whom settled on the present site of Fortitude Valley, which they so named in honour of the ship. (Description supplied with photograph).

By way of background, the Fortitude was one of three ships chartered by the fiery John Dunmore Lang, the other two were the Chaseley and the Lima, both of which arrived later in 1849. Lang believed that for Moreton Bay to flourish as something other than a penal settlement, it needed hard-working, enterprising members of evangelical churches, who were exemplary in character. The passenger list for the Fortitude, available from the State Records Office of NSW and elsewhere, contains the names of most of the prominent families in early Brisbane, and yet their arrival in Moreton Bay was problematic. The ship was quarantined for 2 weeks due to illness and the passengers were detained on Moreton Island. Although they had been promised land grants by John Dunmore Lang, it appears that this wasn’t approved by the Colonial Secretary. The powers-that-be in Moreton Bay settlement therefore didn’t know what to do with these new arrivals.

Eventually permitted to leave Moreton Island, the new arrivals set up camp in what became known as Fortitude Valley. True to the spirit demonstrated by their selection in the first instance, these migrants quickly rolled up their sleeves and set about establishing themselves in a new land. Many of these migrants became ardent separatists as well as anti-transportationists, in contrast to the squatters on the Darling Downs.

The commemorative publication Fortitude Valley Centenary 1849-1949, available via Trove, reports a comment in 1899 about the migrants on the 50th anniversary of the ship’s arrival: “the most well known … the present day are the Challinors (Dr Challinor was surgeon of the ship), Pettigrews, Benjamin and Robert Cribb, Lloyds, Carvers, Childs, Trundles (out of the 13 who landed nine still survive) Slaughter, Roper, Fowles, Sexton, Melville, Vosey, Fielding and Clarke (one of whom is the wife of Mr S. Grimes, MLA).”

Each member of our group selected a different family to research. I changed my initial focus from Robert Cribb and his family as so much had already been written about them. I did find Beth Johnson’s 2005 biography of Robert Cribb, From an iceberg to Brisbane Town, invaluable in documenting the migrants’ early experiences and the links that were established and maintained among this group. I turned my attention to Dr Henry Challinor, surgeon on the Fortitude, who travelled with his relative Mary Challinor and her two children George Miles and Emily.

I used a range of resources, such as the online Queensland BDM indexes, Ancestry, and Trove for newspaper articles and other materials. The Australian Dictionary of Biography provided a good summary of Dr Challinor’s life. Pugh’s Almanac and Queensland Directory was helpful in tracking the careers of Henry and his son Henry Binney McAll Challinor. Early History of Ipswich 1842-1860 included information on a number of the families, such as the Challinors. I also researched the Challinor family background in England.

Dr Henry Challinor became a Licentiate of the Society of Apothecaries (LSA) 1842, and FRCS (Eng) 1864. A useful article on medical education and training explained that Licentiates completed a 5-year apprenticeship and were the forerunners of General Practitioners. Chemists and druggists, on the other hand, were the forerunners of pharmacists. His training enabled Henry to fill an important role in early Ipswich and Brisbane. He regularly featured in newspapers, either as an expert witness, or in relation to one or other of his various roles. He and another Fortitude passenger, Samuel Welsby, established the Ipswich Central Congregational Church in 1853 and they both served as deacons. Henry’s other roles included Coroner for the district of Ipswich, MLA for Ipswich, Commissioner for the Peace for Woogaroo. Later, when he relocated to Brisbane he was appointed Health Officer for the port of Brisbane and Visiting Surgeon and Inspector of the Diamantina and St Vincent’s Orphanages.

Henry married Mary Ann Bowyer in 1855 and they had 8 children. Their eldest son, Henry Binney McAll Challinor was born in 1858. He married Caroline Presley Clark and they had 5 children. This Henry was a public servant. His appointments, all reported in the newspapers, included Clerk of Petty Sessions in Beenleigh, Cooktown, and Bundaberg. While in Cooktown he also served as registrar of the District Court and district receiver in insolvency. His appointment as Chief Clerk of the Police Department enabled him to return to Brisbane. He rose to the positions of Chief Clerk in the office of the Commissioner of Police and ultimately Secretary to the Commissioner of Police. The family built and lived in Fairseat on Birdwood Terrace at Auchenflower. After his retirement he became a prolific writer of prose and verse according to his obituary in the Brisbane Courier in 1926. His death was apparently due to a “nervous breakdown following influenza”.

Ronald Tynsdale Challinor, the eldest son of Henry and Caroline, was born in 1889. I discovered his service record at the Australian National Archives. He had enlisted as a private in the 2nd Light Horse Regiment in August 1914 and served at Gallipoli where he received a gunshot wound to the foot. In 1917 he transferred as Lieutenant to 1 Squadron AFC as an observer. Ronald was shot down and a rather exciting report describes his capture  and his travels as a prisoner of war through various camps in Turkey. He was eventually repatriated to Australia in 1919.

Perhaps Ronald was looking for a quieter life after his wartime exploits. In 1924 after his marriage, Ronald and his new wife, Dorothy King, left Brisbane to become sugar growers at Goondi near Innisfail as noted at the end of a newspaper report on their wedding. Ronald died in 1961 in Brisbane.

Sometimes we need to stretch ourselves by stepping outside our normal research routine. This challenge allowed me to explore a range of record sets and along the way I learned a great deal about the early history of Brisbane. It also confirmed the foresight of John Dunmore Lang in selecting such an enterprising set of migrants. In passing, and by complete coincidence, I note that the Ipswich Historical Society offered a talk on “Dr Lang and the Fortitude” on 28 March 2018; it’s evident that these migrants as a group are regarded as having made a significant contribution to Brisbane and Ipswich.