↓
GSQ Blog→stories→Tales my father told me… 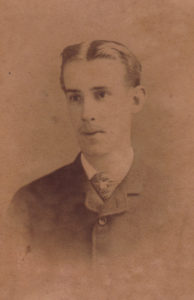 There were two things that my father told me about his father, John Charles (Jack) Wood, which intrigued me. One was that John Charles was born on a ship heading to India and the second was that Jack and his brother Percy, who later lived in Persia (Iran) and was a diplomat, wrote to each other in French.

When I decided to go overseas in 1975, I tried to find Grandfather Wood’s birth certificate so that I could apply for a British passport or an extended work visa. All enquiries in the United Kingdom failed to find any record of his birth. I was advised that as no record seemed to exist, perhaps notification of the birth was sent back to Scotland and may be held in records there. So, when I eventually arrived in Scotland later that year, my first port of call was the Scottish Registry of Births, Deaths and Marriages in Edinburgh. I scoured the records all day, searching for the marriage of Jack’s parents, William Wood and Louisa King, or a birth record for John Charles and his brother Percy. Nothing was found. I even wrote to my father, asking him if he was sure that he had a father!

It took almost another 20 years before I found that some of my father’s hazy recollections about his father and grandfather were wrong. John Charles was not born on a ship en route to India but in the Bombay Presidency to an Indian-born mother (of Scottish descent) and a father who had been in India for at least ten years. When Jack was born, his father was stationed in Satara — not a port city at all but one which lies on a mountain range to the south of Bombay. 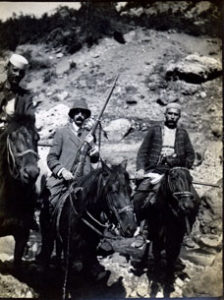 William King Wood on survey in Persia – about 1902

Jack’s brother was not called Percy, but was William King, named for his father and his mother’s maiden name, and nor was William King Wood a diplomat (in the strictest sense of the word) but rather was the Director of the Persian section of the Indo-European Telegraph Department.

I do not know where my grandfather went to school but in later years, his sister wrote that she and her brothers travelled by train from Glencorse to Edinburgh for their education until Jack left for Australia in 1883. However, he was obviously well educated because the Gibson brothers (of Bingera Mill near Bundaberg) would informally consult him about legal matters. William, his younger brother, learnt French at Dollar Academy in Clackmannanshire before returning to India and then on to Persia. So, while I may never confirm it, the story about two brothers writing to each other in French could very well be true.

Another tale of my father’s concerned his middle name which was Gerald. According to Dad, this had come from his mother’s side of the family — the Phillips — but he knew nothing more than that. For years, I searched all of the records I could find, looking for the mysterious Gerald connection, but without any success.

About fifteen years ago, the wife of a cousin mentioned my great great grandmother’s second husband, Robert Hector Paulovich, and their two children who had survived to adulthood. Perhaps there may be a clue there? So, into the records I delved again and this time had success! Ephrath, the daughter of Robert and Mary Anne Paulovich, had married a Fitzgerald and the family lived at Boowoogum near Gympie. Ephrath was the half sister of my great grandfather and her children were first cousins to my grandmother. The families were close and wrote and visited each other – travelling between Gympie and Bundaberg – on a regular basis. 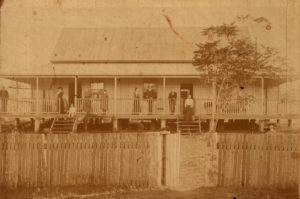 The house at Boowoogum, outside Gympie, about 1905. It no longer stands.

At last, another mystery was solved.

In digging deeper into this tale, I unearthed a veritable treasure trove of records, photos and cousins. I cold called the third cousins still living on the family property near Gympie and when I visited them was shown an old school port which held photos of my father, his siblings, his parents and great grandparents, their houses plus diaries, letters and postcards! 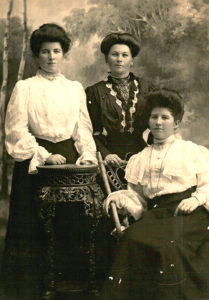 L to R: Kathleen Fitzgerald, Bridget Phillips (my grandmother’s sister), May Fitzgerald
Taken in Bundaberg about 1911