I was one of over 600 delegates at the 15th Australasian Congress on Genealogy and Heraldry, held at the International Convention Centre in Sydney from 9 -12 March. The theme for the Congress was Bridging the Past and the Future. Since my return, I’ve been reading quite a few posts by other bloggers recounting what they gained from attending the Congress, including Shauna Hicks’ post on this blog. As we each take something different from any event we attend, I thought I’d put down my thoughts while Congress is still a fond memory for me and other attendees. 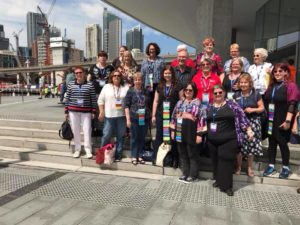 Some of the Queenslanders who attended Congress 2018

This wasn’t my first Congress, I had attended the 2015 event in Canberra. The welcome and general information provided to first timers and bloggers via the genimates at #congress_2018 facebook page was an outstanding way to get attendees involved. Congratulations to Jill Ball and Pauleen Cass for this initiative. This facebook page kept us up to date with formal and informal get-togethers such as photo shoots, dinners and drinks, as well as lots of photos taken throughout the conference. Pauleen Cass and Fran Kitto have adopted a similar approach ahead of the 2019 Queensland State Conference, Waves in Time, being held in March on the Sunshine Coast. 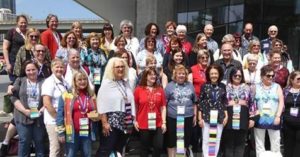 Is the collective noun a ‘bunch, or babble, of bloggers’?

The program was extensive with multiple sessions at each timeslot interspersed by plenary sessions. A major benefit of attending a congress/conference as large as this is the variety and depth of speakers. I believe we can always learn something new, even when the topic doesn’t appear directly relevant to our own research. Standout speakers for me were the international speakers as it’s not every day, or year, that you get to see and listen to them.

I attended two presentations by Judy G. Russell (The Legal Genealogist), both of which related in a way to my role as Convenor of the GSQ Writing Group. In Just Three Generations she demonstrated how family stories can be lost within just three generations if we don’t take a deliberate and accurate approach to passing them down. In a second presentation, she discussed Copyright and Copywrongs. The use of material created by others can be a contentious issue, and Judy helped us along the path of accurately and appropriately using such material.

I attended two sessions by Paul Milner and two by Paul Blake. I shouldn’t probably talk about these two presenters together, but their sessions covered 17th and 18th century UK sources, Poor Law administration, and the nightmare that is London Genealogy. These were all extremely helpful, given my own research is primarily based in the UK.

Lisa Louise Cooke not only gave sound advice on solving our Organisational Problems but transported us around the world using Google Earth Pro which is an incredible tool in mapping your ancestors. She also detailed other apps that she uses regularly and, as I didn’t attend that session, I’ll have to read her notes. Thom Reed from FamilySearch had us all searching for relatives using the FamilySearch app. There’s a feature which allows you to search for relatives near you. This is great if you are in a large group, such as at a conference, and have your family tree on FamilySearch. Quite a few in the audience found they were related not only to Thom himself but to others in the room! 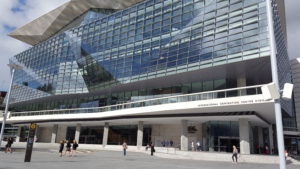 The International Convention Centre was a fabulous venue, although the air-conditioning was rather icy at times. Located in Darling Harbour, the Centre was adjacent to Harbourside Shopping Centre where many of us descended upon the food outlets for our lunch each day.

Other presentations that were illuminating included Angela Phippen’s Oops – I wish I’d checked the original! Using the work The letters of Rachel Henning, she highlighted how the original letters had been edited prior to their initial publication in The Bulletin and how easy it was thereafter to accept subsequent published material based on this version as a full transcript. It was open to speculation as to who did the editing and why. This was a timely reminder to access original records or photographic copies where possible. I loved the quote “Sanitisation is dehumanisation!” The lesson learned, therefore, is to make a clear statement if a transcript is edited and cite where a full version is available.

A wide range of exhibitors were located around the various meeting rooms, and I’m sure many of us gave our credit cards an active workout. Morning tea was catered and the food was excellent. It was also an opportunity to catch up with other attendees. It never ceases to amaze me how you can strike up meaningful conversations with people you’ve never met before – genealogy is certainly an effective ice-breaker.

As I said earlier, I always learn something new from conferences. I don’t have space to write about all the sessions I attended, but it was clear that all presenters had expended significant effort to provide us with interesting and informative talks. I now need to work my way through the handouts for the presentations that I couldn’t attend to see what gems I missed.