↓
GSQ Blog→Christmas→Christmas in the Workhouse 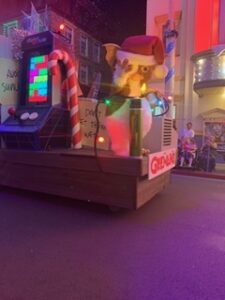 Christmas is almost upon us and it is such a frantically busy time of the year with celebrations happening throughout December. The other night I witnessed the annual White Christmas event at Movieworld.  Enormously popular, it was a sold-out event and I’m told that many people return annually to enjoy the extravaganza, that even includes pretend snow.  The event is popular with young families and, for all those who fear for the diminishing birth rate, let me assure you that I haven’t seen so many young Mums and Dads, babies, toddlers and young children for many a day!

The entire park was lit up like a veritable Christmas tree. Ticketed patrons flocked through the entrance gates, eager to be part of the fun. Adjacent to the entrance stood a gigantic conical-shaped Christmas tree, complete with flashing lights and colourful baubles. There were long queues of crazy people keen to ride the many death-defying roller coasters. 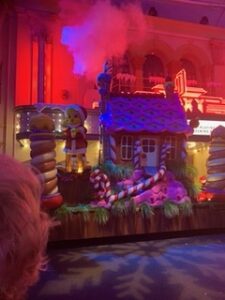 As it approached 8pm, the crowds assembled along the edge of the roadways. It was time for the “Big Parade”. Featuring numerous floats with life-sized Looney Tunes cartoon characters, the parade was spectacular and many of us groped for our mobile phones to take the obligatory photos!

The parade concluded with the appearance of Mr and Mrs Claus and as everyone headed for the exit and the carpark, I reflected on the extravagance of the evening’s entertainment. It had been an event of enormous proportions, and obviously hugely popular with the patrons. As for a source of revenue…formidable, no doubt!

Being a devoted family historian, as I ventured back to my car, I thought of my long-ago ancestor, Zipporah Wootton, who worked as a workhouse matron for a possible 18 years. Zipporah was born in 1810 in Shepreth, a small Cambridgeshire village and was the sixth child of Deborah and Jeremiah Brock[i]. She married William Wootton on 13th August 1831 in the Parish chapel at St Pancras in London[ii]. Having taken the marriage vows to cherish her husband until death, it must have been devastating when William died prematurely in June, 1848[iii]. How was she to support herself? Would she re-marry or find employment? She chose the latter and after working as a housekeeper for several years, she became the matron of the Saffron Walden Union Workhouse in 1862[iv]. 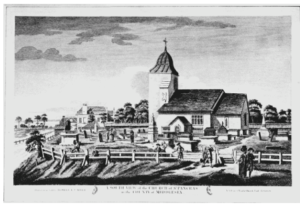 The Old St Pancras Parish Church, Camden, London, where Zipporah and William Wootton were married in 1831, sourced from https://www.british-history.ac.uk<vol .

Zipporah was matron at this workhouse in 1879, when their Christmas celebrations were reported in a County newspaper. There was a large Christmas tree of 11 feet high. It was decorated with fruit, toys, handkerchiefs and other useful articles, and was provided by Mrs Gibson.  On Christmas day, a meal was provided consisting of “beef, plum pudding, porter (which was a locally brewed dark coloured beer), tobacco and snuff, and through the kindness of Mr G.S. Gibson and Mrs Gibson, the women were supplied with tea and sugar, and the children with oranges. An entertainment was provided to the 229 workhouse inmates between Christmas and the New Year. The concert consisted of “readings and comic songs, in character by Mr F Emson, who, in his usual humorous manner, and with his well-known dramatic ability, caused roars of laughter.  The songs were accompanied on the pianoforte by Mrs Whitechurch. The entertainment took place in the new corridor.” 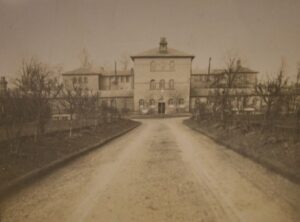 It was also reported that the inmates “appeared to appreciate to the utmost” the entertainment and efforts of the Union Committee members[v].

The contrast in Christmas celebrations over 140 years, is staggering. How times have changed. Perhaps we should consider whether this change has been beneficial to society. Are we truly better off than our ancestors of those long-ago times? I’ll leave that for you to ponder on.