One very small sentence – ‘Brother in N.S.W.’
And so began the search for one ‘William Spooner’ who morphed into one ‘Patrick Toohey’.
‘Say what, that doesn’t make any sense!’ I hear the cry.

But it will… be patient… I’ll explain.

It was 1856 and that short, nearly illegible line scratched onto the immigration record next to the name of Eliza Butler (nee Spooner/Spunner) ‘brother in N.S.W’, was to lead one merry ‘family history dance’ some 164 years later. Eliza had boarded the ‘Hastings’ with her husband William and four fine children unaware of the gauntlet which had been laid down that day.

The research had come quite easily; she and William had left County Offaly in Ireland during the potato famine. They had worked in the Cheshire Silk Mills and were recorded in the 1851 English Census and boarded the ‘Hastings’ and landed in Moreton Bay on 30 May 1857. And that is where the elusive search for Eliza’s brother began.

* Such are the misguided assumptions:
* His surname would be Spooner / Spunner.
* He would arrive in Queensland.
* He would be older than Eliza.
* And he might be easy to find with a reasonably easy surname like Spooner. LOL.

Such are the lessons for new Family Historians (and just when I was getting some confidence)!

* Never, NO, Never, Suppose, Assume A-N-Y-T-H-I-N-G.
* Queensland separated from New South Wales 6 June 1859.
* Families back then were just as complex, complicated, and diverse then as they are today.
* And often left no paper trail to prove ANYTHING.
* When all else fails head for the G.S.Q. DNA Special Interest Group

Death registration of Eliza Butler on 2 August 1897 in Queensland.

Now Eliza’s maiden name was Spooner as you will see, and her mother was Bridget Kilkeary & her father a Spooner/Spunner.

Much searching took place, but no such individual could be found. Her brother quite probably was a Spooner/Spunner… right??

Rejection & Dejection
We sought him here, we sought him there,
We sought our Mr Spunner everywhere,
In convict records, in the English Census,
Queensland, New south Wales, Victorian records,
Under aliases, and under beds,
We built trees …. A forest of them, but not a single one
produced a twig which we could graft,
to our Eliza Spooner family’s branch.

WHEN ALL ELSE FAILS GO BACK TO THE BEGINNING AND SEE WHAT YOU HAVE MISSED
It’s all in the detail! 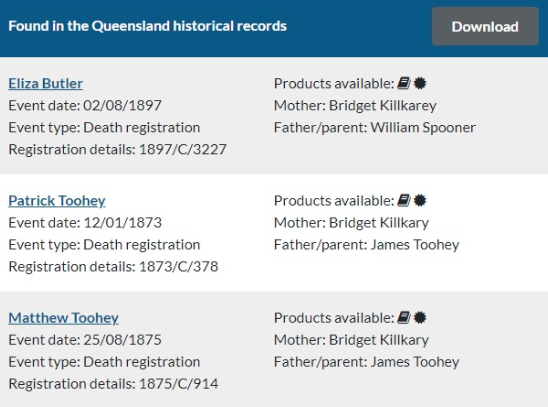 Upon further research I found that Patrick Toohey did indeed arrive in NSW in the year 1855 aboard the ‘Truro’ with his wife and family (before my Eliza). His death certificate states that he was married in Tipperary, which is where at least one of Eliza’s children were registered.

My theory, and until I get a DNA match, that is all it is. Is that my Bridget Killkarey married both James Toohey and William Spooner? And Eliza has two half-brothers. Just like any blended family of today. I am just so amazed that it took so long for me to figure it out.

A word of thanks to the wonderful people at the Queensland Births Deaths and Marriages for the wonderful database which is searchable in so many ways and without which I would never have found Eliza’s half-brothers. That’s my story and I am sticking to it.

Stay posted for the DNA results. I know they will be ever so slight.

If anyone out there has Toohey family from Ipswich, I have access to a wonderful collection of carte de visite photographs which may prove to be some of your ancestors. Please let me know if you would like to compare. We have already put a smile on some descendants faces who never thought they would see the faces of their ancestors.