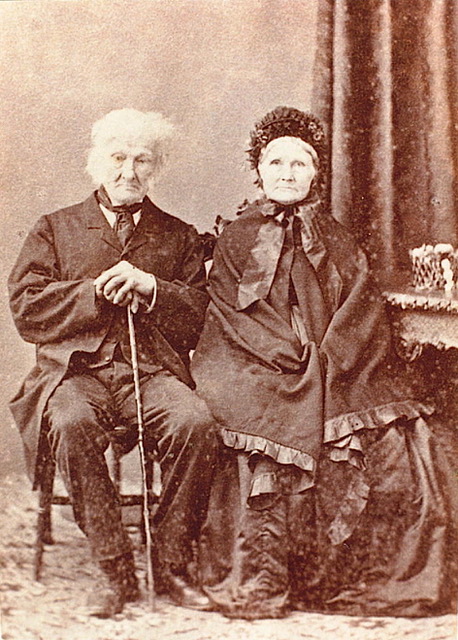 Charles and Elizabeth Hardwicke in 1881

I have written before that one of the unexpected rewards of contributing stories to GSQ Blogs is that it has helped me solve a number of genealogical mysteries.  For example, it helped me solve the mystery of the identity of my great-great uncle Francis Needham’s wife in India when a distant relative contacted me after seeing my post and, not only told me that she was an Assamese lady called Mary, but also provided me with a photo.

However, I noted at the time that I still had not been able to locate a letter written in Tasmania in 1846 by my 2 x great grandmother, Elizabeth Hardwicke. This letter had been referred to in a book titled A Tree has Many Branches written by Kathleen Lewellin about Elizabeth’s mother, Sarah Chapman.

Sarah Chapman was a female convict who arrived on the ship, the Nile, in 1801. Sarah’s first daughter Elizabeth was born in 1802 with the father listed on her baptism record as a John Harris. About 1819, Elizabeth travelled to Hobart and eventually married Charles Hardwicke in Launceston, Tasmania in January 1820. He had arrived in Sydney on 7 February 1814 as third officer on the convict ship General Hewitt. The captain of this ship had treated everyone very harshly, so Hardwicke requested permission from Governor Macquarie to stay in NSW. Elizabeth’s father, John Harris, must have known the third officer, as he recommended that Hardwicke be permitted to remain in NSW. Hardwicke moved to Launceston around 1817 to take up a land grant so perhaps he met and fell for Elizabeth before his departure, or his friend John Harris arranged for his daughter to move to Van Diemen’s Land and Charles met her there.

At the time of her wedding, Elizabeth couldn’t write as she signed her name with an X on the wedding certificate. Kathleen Lewellin writes in her book that Charles taught Elizabeth to read and write and that the evidence for this is a beautifully written letter addressed to her daughter Maria in 1846 which was still in existence. However, there was no reference to where this letter was located. 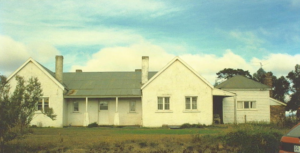 Charles and Elizabeth’s house at Beresford in 1998

On 4 July this year, to my great surprise, I received an email from Kay McCarthy, a relative who is also descended from Elizabeth Hardwicke, and attached to this email was a copy of the letter. For many years Kay had been corresponding with Kathleen Lewellin, the author of the book, who had recently died and the executor had sent Kay a jumble of papers. She knew I had been looking for this letter and just by chance the letter fell out of the pile. Serendipity!

The letter is from Elizabeth Hardwicke to her fourth child, Maria Robarts (Elizabeth and Charles Hardwicke had fourteen children) written on 16 June 1846 from the Hardwicke’s property Beresford near Westbury which is about 30 km west of Launceston. Maria was 22 years old and had married James William Robarts two years earlier and was living in Hobart Town. 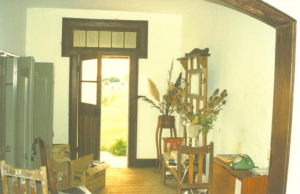 Elizabeth’s letter is in response to a letter from Maria. Maria had a 14-month-old son named after her father, Charles Browne Hardwicke Robarts, born on 19 April 1845. Elizabeth wrote that she was

… anxious to hear how you were going on but you do not say one word about your baby. I am left to suppose it is quite well but I am sorry to hear your account of Mr Robarts circumstances.

I am not sure what these ‘circumstances’ were but, in her letter, Maria must have asked for money as Elizabeth replied that

… I am certain from what he [her husband Charles Hardwicke] has told me about his money affairs that he has not got it in his power to afford assistance and from what he said about your former application I am certain it would make him feel very uneasy were he to read your letter to me.

However, they did send some money which Elizabeth explained would be forwarded to Maria when Charles went to town on Wednesday on his way to Piper River. She wished that she ‘ … could send something better but you know I have not got it in my power.’

I assure you you are much mistaken in supposing you are forgotten for I should be greatly pleased to see you again and was very glad to hear the account your Father and Betsy gave on their return from Hobart Town.

And there also seems to have been a difference between Maria and her sister Louisa (Elizabeth’s sixth child who was probably still living with her parents as she didn’t marry until she was 40).

Louisa is surprised about what you say respecting her visit to Hobart Town … she seems reconciled to the disappointments which actually has been occasioned by your own pressing invitations not by any request on her part although she would have been delighted to see you and your baby.

Elizabeth ends her letter hoping that Maria would visit them, the pleasure that would give them and that everyone sends their love to her and her husband who she calls Mr Robarts.

Maria’s husband, James William Robarts, worked for the Government Printer in Hobart Town. In June 1863 after working there for 24 years, he received a pension of 226 pounds (this was probably a lump sum as it is too much at that time to be a yearly pension) and there is some thought that he was sacked as he had received a very poor report. Three years later in 1866 he left his family and went to Sydney and did not return until November 1868. 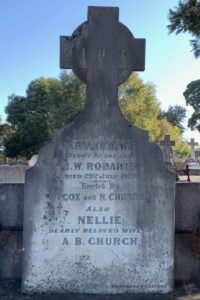 On 21 July 1869 after 25 years of marriage Maria applied for a Judicial Separation by reason of adultery. Maria’s petition stated that since her marriage she had cohabited with him and had seven children (she had ten children but three died within a year of their birth) but that while he was away in Sydney he had committed adultery and ‘kept a mistress at Sydney’ although Maria did not know her name.  When he returned to Hobart Town he resided with his family at 190 Macquarie Street Hobart but from April to June 1869 he committed adultery with Emily Martha Riley. Maria applied for a divorce, custody of her children, costs associated with her petition and further other relief from the court; this meant relief that the court believed was fair and equitable, even if neither party requested it. Perhaps Maria received some of her husband’s pension money  (if it had not already been spent)  as she certainly would have needed further relief because although her eldest child was 24 her youngest child, Fanny, was six years old. Six years later Maria moved to Albert Park in Melbourne and died in Victoria on 29 July 1909.

Elizabeth’s letter provides a direct window into the Hardwicke’s life at that time. It leaves some unanswered questions but shows that Elizabeth could now write fluently and was experiencing the problems and misunderstandings that unfold in every family. I am so glad I have now read this letter and it provides another example of why we need to engage with as many family members as possible in order to hear and read all the stories of our families.

A special thanks to Kay McCarthy who provided me with Elizabeth’s letter and the photos for this post.