I wonder if you read the heading above and thought as I did many years ago; “what is a convict love token?”

It was just over 5 years ago when I received a phone call from Paul and although I cannot recall our exact conversation, the reason he was phoning me was to ask if I might be able to find out the original owner, or rather inscriber, of a convict love token he had purchased at an auction.  At the time, I had never heard of a convict love token, and I think I said as much, and so he proceeded to tell me a bit about them.  Of course, little did he know he had my complete interest after the initial three words “convict love token” – as even just the word “convict” garnered a response inside me which said, “I’d love to find out more”.

Convict love tokens.  I found out quite quickly that they were tokens inscribed for the loved ones of convicted British men and women before they were transported to Australia.  The words, and sometimes pictures, were always written on the back of a coin only 36mm in circumference.  This in itself is quite a feat for many convicts, who would have been without a magnifying glass, and who didn’t have the ability to write their name.  It is believed now that many of them were inscribed with the assistance of a friend in similar circumstances.

Paul’s request was intriguing, to say the least.  He had bought the token at an auction, and from its owner he learnt out that the token was found in a box alongside an old Ship’s Journal about a voyage taken from England to Australia by one Thomas Noyes Lewis.  This information got me thinking, as you probably are now, who was Thomas Noyes Lewis?  I was just itching to start researching any link from the coin to this Lewis chap.  Firstly however, what did the coin say?  Well, it was inscribed on the back of a King George III 1807 coin, and said the following: 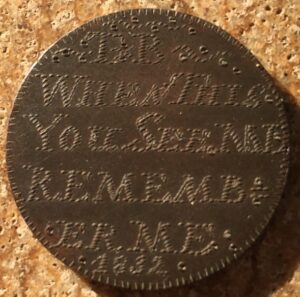 Paul was interested to know if there was any link between the token and Thomas Noyes Lewis.  Who was T.B?  Did Thomas have a brother-in-law who was a convict?  An uncle?  A servant?  And who was M.B?  A wife left behind, a sister, mother, aunt?  So many questions.  Unfortunately, after looking into the life and times of Thomas Noyes Lewis, we could not confirm a connection to the token, nor did we ever find the original convict who inscribed the coin.

Upon writing this blog, the existence of convict love tokens has grabbed my attention again.  I only had to turn to my right and see there, among the many books on my office bookshelf, one I had picked up a few years ago after my search on Paul’s behalf.  Convict Love Tokens: The Leaden Hearts the Convicts Left Behind by Michele Field & Timothy Millett (Wakefield Press, 1998) is one of the most fascinating books I own.  Within its pages are the descriptions of some of these stunning and emotive love tokens; words inscribed by some of our own forefathers who we know, all too well, were punished beyond their due.  Here are what just a few of them say:

Thomas Davies in 1785 inscribed:  Hardship This Was Not Sent In Compliment But As A Token For To Show The Love I To My Sister Owe

Joseph Comporo in 1803 wrote:  How hard is my fate how galling is my chain

A man named S.B. in 1815 inscribed:  Time May Pass Tears May Fly Every Oak Decay And Die And Every Joyful Dream May Set But You Dear Sarah I Never Shall Forget

John Campling in 1818 wrote:  Dear father mother a gift to you – from me a friend whose love for you shall never end 1818 (then on the other side) When this you See Remer me When In Som Foreign Country John Campling

Henry Barton in 1825 inscribed:  Dear Elizabeth When this you see Remember Me Now I am Bound To Two Years Slavery 1825

Joseph Hickman in 1829 wrote:  Dear wife When this you see Remember me and bear me in your mind let all the World say what they will don’t’ prove to me Unkind

John Fulcher in 1831 incribed:  John Fulcher Norwich Aged 22 1831 Keep this to remember me Till I am free & me you see Time rolls on quick a though it flew My love is constant true to you

J.F. in 1837 wrote:  May the rose of England never bud the thistle of Scotland never grow the harp of Ireland never play till I poor convict gain my liberty

These words that we can now read, knowing they were either written by their own hand, or by the hand of a fellow victim, are almost too painful to bear.  These words, which I believe would have been painstakingly penned as tears streamed from tired eyes, make me long to hold one of the tokens in my hand, to run my fingers over the inscription – as though in doing so, I can in some way bring comfort to the memory of a life destroyed by the fall of a wooden gavel.

The following images are just a handful of the convict love tokens which have been discovered around Australia and Britain.  I hope you enjoy these as much as I do, and I hope they deepen the compassion you have for your convict ancestors. 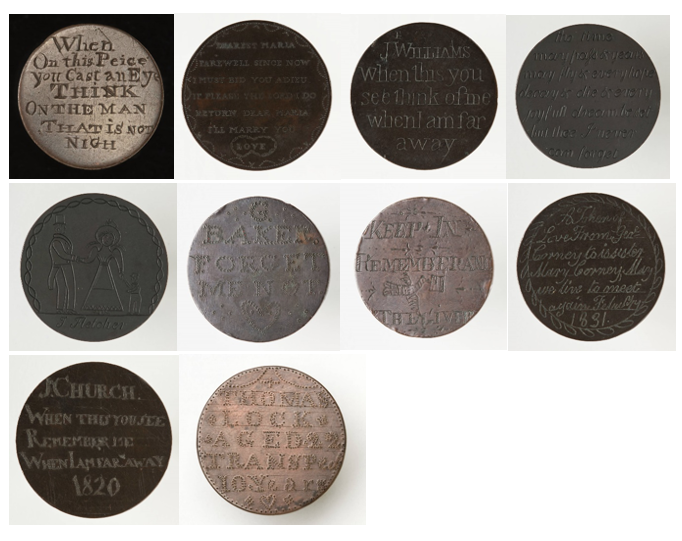 Both sides of convict love tokens by Joseph Smyth and Cornelius Donovan.