My previous post was about my dad, Joe Stirland. One of the images included in that post was my mum and dad’s wedding photo from August 1946 (see my post of 21 September 2020). I had copied this photo from my mother’s collection on one of my trips back to England. As is typical of group wedding photos, the groom’s parents are placed on ‘his’ side, whereas the bride’s parents are placed on ‘her’ side. When the post was being prepared for publication, it was evident that my paternal grandmother was in the shade. As well, my paternal grandfather was at the back, whereas my maternal grandparents could be seen clearly standing next to one another not far from my mum. I wondered why the photographer chose to group the bridal party in this way. Maybe it was due to their respective heights – my paternal grandparents, especially my grandfather, were much taller. Thanks to some photo restoration work by Bobbie Edes, the faces of the people on the version published on the blog post were clearer. The problem remained, however, of my paternal grandmother, Lizzie: she remained mostly in shadow. The more I thought about it, I realised that this typified her in my memory. Despite living in close proximity to her for most of my childhood and teenage years, I knew very little about her. Unlike my mum, who often spoke fondly of her parents, my dad rarely revealed much about his parents and his feelings towards them. So, as someone who has regularly presented on the topic of ‘Finding grandma‘ this post is about one of mine – Lizzie (not Elizabeth) Stirland, née Kinston – as a way of bringing her out of the shadows.

Lizzie Kinston was the eldest child, and only daughter, of Joseph Kinston and Mary Ann Pickering, born on 29 December 1895 in Church Gresley in South Derbyshire. The name Lizzie was probably in honour of her father’s sister, Frances Lizzie; their father had died of phthisis only a few years after these siblings were born and I think they remained close. One of Frances Lizzie’s daughters was a witness at Lizzie’s marriage. Her father, Joseph, was a coalminer, as were the majority of the other men in the family. Lizzie was followed at two-yearly intervals by brothers John, George, Joseph, Albert and Harry. Mary Ann gave birth to two other children but these weren’t named in the birth registration records, so likely died shortly after birth. 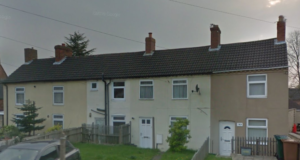 The family moved to 165 High Street, Newhall in South Derbyshire around 1900 and Lizzie is recorded there in the 1901 census aged 5 years. This was to be Joseph and Mary Ann’s family home until their respective deaths in 1924 and 1945. Life must have been really chaotic in what is a fairly small cottage, especially once the boys started to grow up. In the 1911 census, the house description shows eight people in four rooms, including the kitchen, which leads me to believe that the small house at the end of the row was theirs, even though it now has a different number. At this time, Lizzie was training to be a dressmaker. Her brother John was already working in the pottery industry, even though he was only 13 years old. The younger brothers were all still at school.

I am not sure how and when she met my grandfather, Arthur Stirland – another coalminer – but they married on 4 August 1919 at the nearby St John’s Parish Church in Newhall and set up home across the road from Lizzie’s parents as well as the parish church. She probably received help from Mary Ann as two children arrived in quick succession, my aunt Irene in 1920 and my dad in 1921. By 1924, when her father Joseph died, Lizzie and Arthur were living at Meadow Lane in Newhall, separated from Lizzie’s mother and siblings by the parish church and one of the many local pubs. While on a map this looks a little further afield, I seem to remember a footpath through the church grounds and cemetery linking Meadow Lane to the High Street. I can picture the young Irene and Joe making their way on a regular basis to see their grandmother and those uncles still at home; there was always a strong connection between the two families and this was probably how my dad picked up his hobby of pigeon racing. The family were perennial renters rather than purchasers of their homes, but they never strayed too far from parents and siblings. Then a new street of council houses was constructed in the 1930s in Swadlincote called Coronation Street – maybe this reflected the coronations of Edward VIII and George VI in 1936. Arthur and Lizzie made their final move to No. 34 where they lived until their deaths in the 1970s. 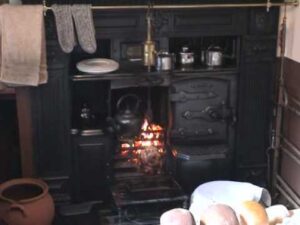 Lizzie must have revelled in her new home which had 3 bedrooms upstairs, a front living room, a kitchen at the back and a bathroom. Nowadays we would not appreciate an outside toilet but this could have been an improvement on their previous home, despite the basic nature of the amenities. The bathroom for instance only contained a bath, no toilet or washbasin. Water was heated by lighting the coal fire in the kitchen. The kitchen range was black lead, with ovens at the side, where Lizzie did all her cooking. I remember a kettle suspended over the coal fire to heat water for the endless cups of tea. The bedrooms had small fireplaces for heating, but no electricity. Lighting was initially provided by gas until electric lights were installed; remains of the gas light fittings were still evident on the walls. The house always seemed to be dark inside. Another interesting feature of the house was the large open-air rainwater tank just outside the kitchen door. As a child I was always fearful of what was inside it and afraid of falling in. It’s not clear what the rainwater was used for, but it didn’t have a pleasant smell.  This raises the point that every house has a distinctive smell: No 34 Coronation Street reeked of the odour of tinned pilchards, which was a favourite tea-time treat for them, but sickening for me. An added bonus was the extensive back garden, used for growing veggies, and also the home of the family’s pigeon sheds. 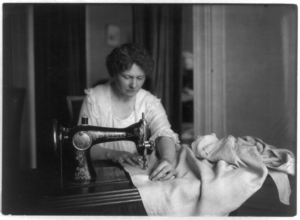 I was told that Lizzie dressed very stylishly when she was young, which I suppose was relatively easy for a dressmaker. I have no photos of her except for my parents wedding photo and only one other of my grandfather and his sisters. In her later years, she always wore a protective apron over her clothes. From family stories and personal experience, Lizzie was an accomplished pianist, unable to read music, but able to play by ear. Her piano sat in the front room as did her other pride and joy – a Singer treadle sewing machine. Lizzie was a talented seamstress and also excellent at crocheting; the only interaction I remember with her is when she taught me to crochet. She made many beautiful items, which were subsequently stored away. She continued sewing throughout her life until things became too difficult for her.

Arthur and Lizzie seemed to live their life outside the public gaze. Apart from a newspaper report of an injury that Arthur incurred in a workplace accident at the pit where he worked, it has proved difficult to locate any other material in newspapers, either positive or negative, which would shed light on their lives. There are numerous reports of the social activities of ‘Mrs Stirland’ and ‘Miss Stirland’ in the local newspapers, but due to the timing, this is unlikely to have referred to Lizzie. Without a first name, or even an initial of the first name, it is difficult to determine who these women were and how they were related to Arthur: mother, sister, aunt, cousin. All those named Stirland in this district were related, having descended from the 14 children of Joseph Stirland and Hannah Chambers.

As he grew older, Arthur became increasingly more curmudgeonly and could make life difficult for Lizzie and everyone else. They depended greatly on Irene and Joe to manage their daily lives. Arthur died aged 76 in May 1971. Lizzie died some 18 months later in October 1972. Her death and funeral arrangements were published in the local newspaper and I was included in the list of mourners; I had forgotten that I attended as I was living in London at the time.

Going back to my Finding Grandma presentation, I recommend looking first at family memorabilia – I have a glass bowl which my father gave me after my grandma died, which is one family heirloom that I have. There are no photo albums, family bibles, correspondence or diaries. It’s more than likely that these were all tossed out when their house was cleared after her death. She did not leave a Will. I have official records of birth, marriage and death; she was baptised at the Wesleyan Methodist church in Swadlincote, but an image of the baptism record remains elusive. I cannot find any records of her schooling or her training as a dressmaker, which leads me to think that this was an informal arrangement. It’s likely that she worked as a dressmaker until she married, and then perhaps focussed on making clothes and other items for family members. In the 1939 Register, she is recorded as undertaking “unpaid domestic duties” as were many other married women. My grandparents did not have a phone so are not listed in telephone directories. Lizzie would have been eligible to vote from 1928 when universal suffrage was granted in the UK, but I cannot find her on electoral rolls. As already mentioned, searches of newspapers have so far proved fruitless. If anyone has any other suggestions then I would be more than happy to receive them.

I remember Lizzie as distant, not the kind of grandmother whom you would hug or kiss. By the time I was old enough to interact with her, life was already taking its toll and, in hindsight, sadly, many of her talents were significantly diminished, possibly due to dementia. I feel that this post has brought Lizzie out of the shade somewhat, but it is sad that I still know so little about her life.