↓
GSQ Blog→aviation→Early aviation→Flight from Brisbane to London, May 1939: Alice Walsh.

Most Australians cannot travel overseas at the moment and even when we can travel, we often complain about the 24 hours it takes to get to Europe. How would we feel about taking nine days to travel from Brisbane to London? 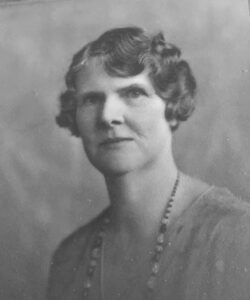 Portrait of Alice Walsh (nee Barton) as a mature woman

I have been sorting through some of my cousins’s old photos and letters after she moved to a nursing home and I came across an eleven page, hand written report entitled Flight from Brisbane to London, May 1939 written by my cousin’s maternal grandmother, Alice Walsh (née Barton).

Alice Barton was born on 11 January 1880[1] on Moolboolaman Station located west of Bundaberg. Her parents were Augustus Purling Barton and Geraldine Barton and she married Western Walsh in August 1901.[2] He was a survey engineer with the Queensland Railway Department and then worked in Malaya where he and Alice lived for a number of years before they moved to Southport where he died on 6 April 1932.[3]

After his death and at the age of 59, Alice took a flight to London in May 1939. Qantas Empire Airways had opened the first air-route between Australia and London in 1935 and in April 1939 the route from Brisbane to London commenced. A month later Alice Walsh recorded the excitement of the morning that she left from Archerfield Aerodrome.

Richard called me at 5 & Charlotte brought tea & hot water – Betty Page in to help with last moments – all off at 6 [from Southport] …. arrived Archerfield 7.15. Luggage weighed 6lbs over weight (10/- a lb) but Mr Wetherall let me off.

She was seen off by a crowd of people and ‘Kissed them all & away at 8.30’ with a ‘full ship’ of six passengers all of whom the Captain came and spoke to individually soon after take off. They arrived at their first stop at 1.30pm, ’Cloncurry My 14th Landing’. She must have made thirteen landings previously, many of which were probably taken during her time in Malaya, and throughout the flight she numbers the landings.  They had lunch (curry, tomatoes and bread and butter) on a gauzed in verandah and then continued their flight ‘across the arid wastes of lovely N.T. heathaze’ arriving at 6pm in Darwin which ‘looked green & pretty from air with sea & mangroves & lots of trees…’ She spent the night in Darwin taking a walk after dinner in bright moonlight to the wharf where there were two Empire flying boats. 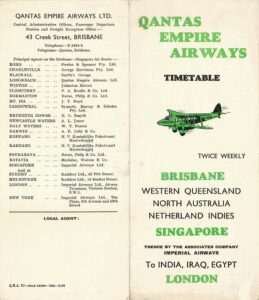 The next day they left at 8am making a stop at Koepang (now Kupang), in what was then Dutch Timor, where she had a ‘lovely nasi goring breakfast.’ Their next stops were Den Pasar, Surabaya and then Batavia (now Jakarta) where they stayed the night and she enjoyed ‘ a real Malay bath’. Their next stop was  Palembang in South Sumatra and on the way they glimpsed ‘tileroofed villages coconuts padifields rivers etc.’ and after refuelling, continued to Singapore arriving ‘at the beautiful new airport built on reclaimed land.’ Passengers were transferred here to an Imperial Airways flight to London and they continued to Medan in North Sumatra where they stayed the night.

They then flew to Penang in Malaya and then Bangkok where they had lunch and she reported that she had a run in her stocking! On the way the Captain had flown low and circled over wild elephants grazing in swamps. The next stop was Rangoon (in what was then Burma) where she was taken for a tour and saw the Shive Dagon Pagoda with its ‘873 Buddhas.’ That night she was sick but was still woken early to catch the flight to Calcutta where they had breakfast. Next stop was Allahabad (now Prayagraj) for lunch in the ‘raging heat 113’ and she reported that other passengers were sick too and ‘no interest outside and curtains drawn’ during the flight to Jodhpur (in Rajasthan). 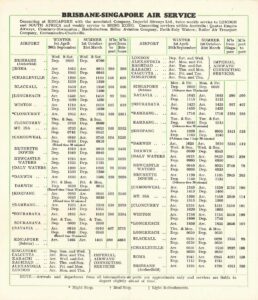 After staying the night in Jodhpur, they left with the Maharajah of Jodphur plus his brother and two sisters on board and there was ‘great salaaming[4] among the crowd seeing him off.’ The Maharajah left the flight in Karachi where they had breakfast and then they flew over the Arabian Sea to Jask (in Iran across from Dubai on the Gulf of Oman) where the people were commemorating the marriage of the Prince of Iran to the sister of King Farouk of Egypt and she reported that she had another run in her stocking!

Their next stop was Basra and after a bath at the hotel, she went for a drive and saw date palms and women dressed in black carrying pots on their heads. Another very early morning departure for Baghdad with the  ‘morning star shining in false dawn [and] good moon in west.’  There was a hot haze when they flew over Ctisiphon and they reached Baghdad at about 6am ‘circling over town – saw chimneys domes minarets brick kilns – cup of tea at airport on lawn.’ They resumed their flight with the Euphrates River winding below and passed  ‘Lake Al  Habbaniyah where the flying boat crashed fatally last November.’[5]

They continued passing Amman (then Transjordan), the Dead Sea ‘looking so big & blue’, Jordan Valley, Jericho, Jerusalem, Mount of Olives and finally at 10am they landed at Ramleh (then in Palestine and now called Ramla, Israel). They had lunch in Alexandria in Egypt with Captain Macaroni  ‘in a little bungalow with weighted white fish net curtains.’  The next stop was Athens where she did a tour of the Acropolis, the Arch of Hadrian, the Olympic Games stadium and Lord Byron’s memorial. They stayed the night and next morning at 3am they left for the airport with the ‘morning star shining over the Acropolis – chilly’. 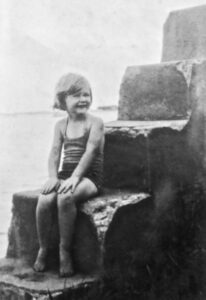 After a five hour flight to Buda Pesth (Budapest), where they had ‘ham & eggs strawberries & whipped cream – crisp rolls butter honey and coffee’, they flew north and landed at Leipzig.  She noted that there was a ‘Picture of Hitler which I would not face at lunch.’ They crossed the border of Holland with its ‘canals and windmills – steward showed me Zuyder Zee & talked about polders & the big embankment to keep tide out & water fresh.’ In Amsterdam they transferred to a special plane and at 5.15 pm on 5 June 1939 after nine days and 26 landings, they arrived in London!

However very soon after her arrival there was the impending threat of war and she wrote on 24 June 1939 ‘I am feeling sick with anxiety about the Japanese situation…What shall I do if war breaks out – how can I get home?’[6]

There is no record of how and when she returned to Australia but she did return within the year as the Courier Mail recorded in August 1940 that she had lent £25 to the Southport Fund towards the Commonwealth War Fund.[7] She died many years later on 6 August 1974 aged 94 and I can only imagine that during these years she regaled people with many anecdotes from her long and intrepid journey to London.[8]

** The photo of the little girl is titled ‘Cousin Margaret Bell as a four year old on the granite stops at Southport near her grandmother’s house’. Margaret is Sue’s cousin who inherited this story and the photo of Margaret is believed to have been taken by Alice in 1937.