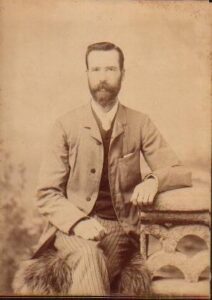 Portrait of Alexander Irvine taken about 1889.

Alexander son of James & Sarah Irvine of Ballytrim was the couple’s 11th and final child born on 4 April 1859 according to the family bible. The two-week-old baby was baptised on 19th April 1859 at 1st Presbyterian Church, Killyleagh, Down and noted as being 14 days old.[1]

Alexander travelled to Australia with his aged parents and older brother John Irvine, who had returned to Killyleagh to escort the party on the long journey to Australia in 1888. The party travelled on the Steamer Iberia of the Orient Line, departing from London on 14 September and then calling at Plymouth, Gibraltar, Naples, Port Said, Suez, Aden, Colombo, Albany and then Port Adelaide on 25 October before continuing on. The journey to Albany took 6 weeks 6 days with the party travelling as Unassisted Immigrant Passengers.[2] 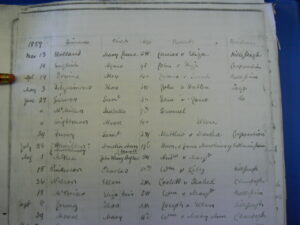 By the account published in the Sydney Morning Herald on Friday 2 November 1888 the vessel enjoyed a relatively incident free journey through the Med and Suez Canal to Colombo. From there to Albany was a journey of 12 reasonably rough days continuing onto Adelaide and Melbourne, then finally Sydney arriving ‘in splendid order’.  They disembarked at Sydney on 1 November 1888 and then travelled to Brisbane the following day on the Steamer Fitzroy. 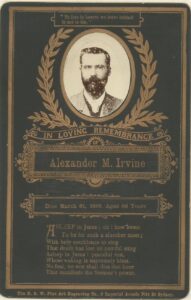 Memorial Card of Alexander Irvine who died on 31 March 1895.

A handsome young man, as an adult he adopted the middle name of Moffat, like a number of his brothers who had also added middle names as they grew up. Like his father and brothers, Alexander was a boot maker and lived with family members in James Street Fortitude Valley before succumbing to ulceration of bowels causing his death on 31 March 1895 at the young age of 36 years old.[3] At the time he was being cared for by his sister Margaret & her husband James Carothers in Church Street Bulimba. His aged mother Sarah was 79 and had lost her loved husband four years prior, so I can only imagine the grief she felt at this time. Alexander was buried by Cannon & Cripps alongside his father near the top of the hill in Toowong Cemetery section 13-85-7. 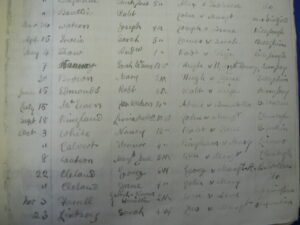 Sarah and James Irvine took their ninth child, a daughter born on 15th November 1855 along to be baptised when she was five months old on 15th April 1856 at 1st Killyleagh Presbyterian Church, Killyleagh, County Down, Ireland.[4] An adult aged thirty, Sarah (Jnr) travelled with her then married sister Margaret Carothers, husband James Carothers and their children to Australia on the Oroya via Adelaide, Melbourne and Sydney.[5] The family group landed in Brisbane on 15 August 1887; also noted on the same page of the immigration log was James McClurg, who may have had a family connection. 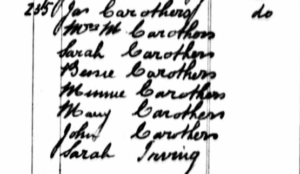 Sarah is recorded with the Carothers, but her surname was incorrectly spelt as Irving. Margaret & James Carothers had previously emigrated to Queensland separately and then after their marriage in 1874 returned to Ballytrim with their young family between 1883 and 1886.

On 26th December 1899 at the age of 44 years Sarah married bootmaker James Young however there were no children from the marriage.[6] Just five years after her marriage, at the young age of 49 years Sarah passed away on 21 November 1904 at Church Street, Bulimba.[7] It appears that Sarah and James Young had moved into the premises that were previously the boot-making business of her brother, Hugh Irvine who had relocated to the Brisbane suburb of Wynnum. Her cause of death was stated as congestion of brain, congestion of lungs and heart failure.[8] 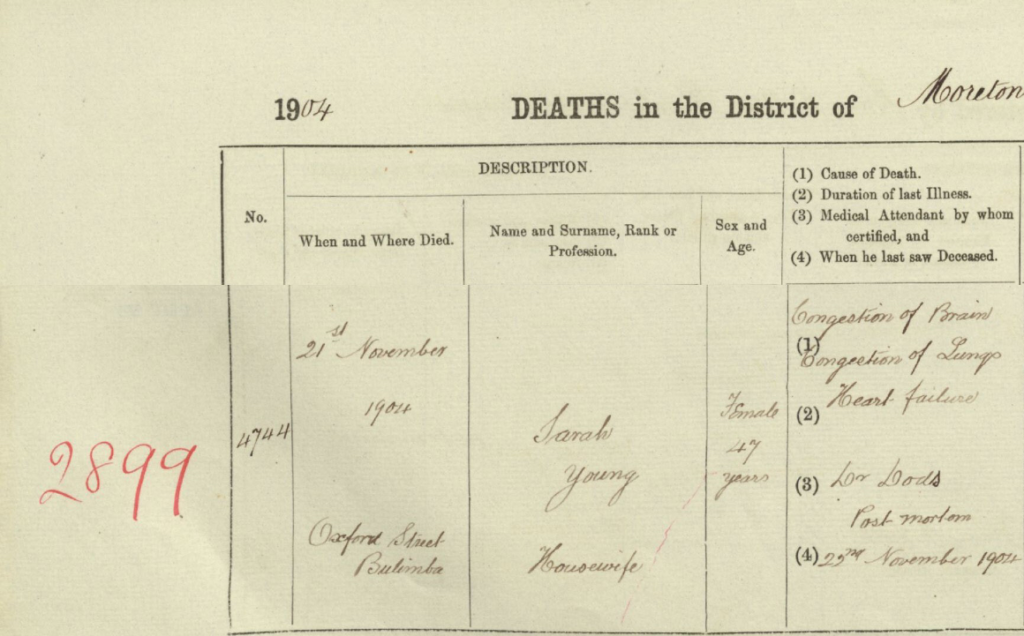 Her death was certified by Doctor Dods and on the typed certificate originally sent to me it stated he saw the deceased on 23 November 1904. This was a typing error as her burial is recorded as 22 November 1904, I wrote to the Queensland Births Deaths & Marriages department at the time and they sent a ‘corrected’ typed imagine which showed the doctor last saw her on 22 November 1904.  On 25 November this year, I emailed the department about this date. A staff member from the department kindly rung me to advise that this date was the day the Doctor did a Post Mortem on Sarah so I requested a scan of this in the form that was completed for her death registration.

This was received and I am guessing now that her death was totally unexpected as maybe she hadn’t had medical treatment for any ailment in the past. I’d never seen this type of discrepancy before, so it was obviously worthwhile querying the details in the typed certificates I’d originally received.

Her burial took place at Toowong Cemetery on 22 November 1904 and the burial was certified by John Hislop. Rev. Thos. Manders was the minister with John Melville and Thos. H. Brown as witnesses.  The informant for the death certificate was James Young, Husband of Oxford Street, Bulimba. Sarah was buried alongside her father and brother near the top of the hill in Toowong Cemetery section 13-85-7.