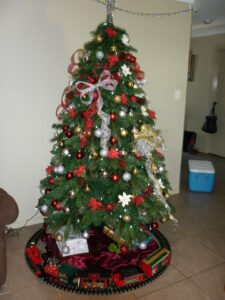 Much of the non-personal information in this blog is from a marvellous site I stumbled upon recently. It is by James Cooper, a Christmas loving web designer and titled: WhyChristmas?com  There are many additional countries on his website, so take a look. My thanks to James for giving me permission to use the below information.

NORWAY – by James Cooper
Christmas Eve is the time when presents are exchanged. The gifts are sometimes brought by Santa Claus (called ‘Julenissen’ in Norway). Presents are also brought by the small gnomes called ‘Nisse’. There are also hobgoblins (Nisse) decorations.

During Advent/December in Norway, sometimes small gifts are given on each day of December leading up to Christmas. These are known as Adventsgave or Kalendergave. There is a similar tradition in Denmark. The gifts are sometimes used together with a chocolate Advent calendar! As in Finland, a sheaf of wheat is often left out for the birds to eat over Christmas. Also, a type of rice porridge is sometimes left for the ‘Nisse’ who is believed to guard the farm animals.

In some parts of Norway, children like to go carol singing. Often children will dress up as characters from the Christmas Story, such as the Shepherds and Wise Men, and go singing from house to house in their local neighbourhood. Sometimes they carry with paper stars on them. Another tradition in parts of Norway is that families light a candle every night from Christmas Eve to New Year’s Day. 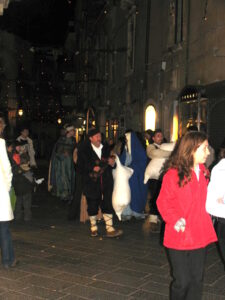 CROATIA – by James Cooper
In Croatia, preparations for Christmas start on 25th November which is St Catherine’s day. People also celebrate Advent. Over 85% of people in Croatia are Catholics so Advent is an important time for them. It’s traditional to have an Advent wreath made of straw or evergreen twigs which has four candles. The wreath symbolizes endlessness, and the four candles symbolize different parts of history and life:

On St Nicholas’s Eve (5th), children clean their shoes/boots and leave them in the window. They hope that St Nicholas will leave them chocolates and small presents in their boot. If children have been naughty, Krampus (a big monster with horns who sometimes travels with St Nicholas!) leaves them golden twigs to remind them to behave.  On St Lucia’s Day people often sow wheat onto small plates. The grassy sprouts that grow (called Christmas wheat) are put underneath the Christmas Tree on Christmas Eve. 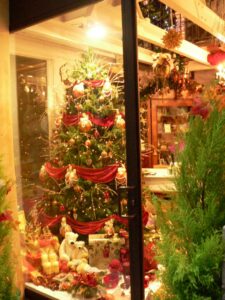 SICILY – By Bobbie Edes
My story
As a family we were lucky enough to be in Taormina, Sicily for the weeks around 2006 Christmas. This was in the midst of my cancer treatment and my Oncologist agreed that instead of three weeks between Herceptin infusions, I could go four weeks that once. My girls were living in England at the time and I felt a holiday in a warmer climate would be a bonus. Little did I realise that Sicily is quite cold in this time of year, in fact, snowing on Mt. Etna!

To set the scene as we flew into Catania, I realised there was a strange glow coming through some clouds in the distance. A few minutes later the pilot announced that Mt. Etna had just erupted, we were indeed lucky to land, our older daughter landed a couple of hours later. We initially went to the South West Coast and had a base there for 7 nights touring different places each day. We then headed north eventually in Palermo for a further few nights, then back to Catania to pick up daughter two and her partner and up to the two-storey villa on the cliff below Taormina for the week. 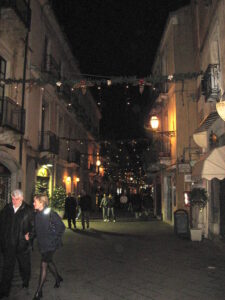 We drove up the rather scarry road to the town parking station each night for tea, at that stage only residents are allowed to park in the town. A couple of nights we caught the cable car up which was only three doors from our villa but stopped at 8pm or so. Nothing much happens in the town until 9pm when locals come out to eat, stroll and generally meet up. It’s an amazing place with its amphitheatre being in one of the most spectacular spots we’d seen. 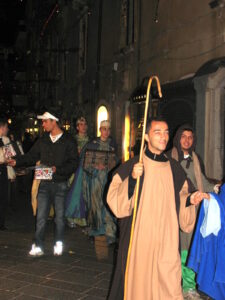 The main street of the village had a large bon-fire, the windows were made up specially for Christmas and the church had a wonderful nativity scene. On Christmas Eve after a yummy meal in the local pizzeria we headed to the main street for the procession. It was truly spectacular, I felt blessed to be able to see it surrounded by my family. This was followed by a very laborious lighting of the Christmas bonfire in front of Duomo di Taormina. It really was an amazing holiday, thoroughly enjoyed by us all.

SINGAPORE  – by James Cooper (additions by Bobbie Edes)
Although only about 19% of the population of Singapore are Christians, Christmas is still a widely celebrated holiday. Christmas lights are very popular in Singapore with Orchard Road having a very big light display and a night-time Christmas Parade. 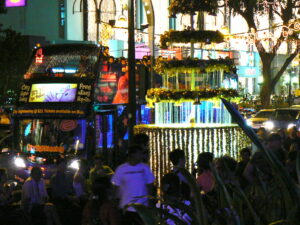 Outside St Andrew’s Cathedral there is a life size Nativity Scene. Going to a midnight church service is becoming more popular even if you’re not a Christian. Popular Christmas foods include ‘western’ things like Roast Turkey, although they might be floured with ginger and chilli to make them especially Singaporean. On New Year’s Eve there’s a big firework display at Marina Bay.

UNITED KINGDOM – Intro by Bobbie Edes.
I’ve had the pleasure of spending quite a number of Christmas’ in England. Their customs are very like our own, without the house lights decorations that seem to have got bigger and better here in Queensland each year. 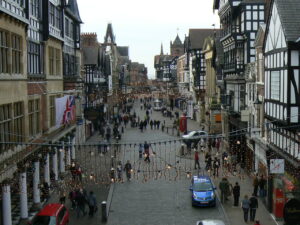 ENGLAND Continued – by James Cooper
In the UK (or Great Britain), families often celebrate Christmas together, so they can watch each other open their presents! Most families have a Christmas tree with the decorating of the tree usually a family occasion. Christmas Trees were first popularised the UK by Prince Albert, the husband of Queen Victoria. Prince Albert was German and thought that it would be good to use one of his ways of celebrating Christmas in England.

Most villages, towns and cities are decorated with Christmas lights over Christmas. Often a famous person switches them on. The most famous Christmas lights in the UK are in Oxford Street in London. Every year they get bigger and better. Prior to 2020 thousands of people went to watch the big ‘switch on’ around the beginning of November.

USA – by James Cooper
The United States of America has many different traditions and ways that people celebrate Christmas, because of its multi-cultural nature. Many customs are similar to ones in the UK, France, Italy, Netherlands, Poland and Mexico.

The traditional meal for Western European families is turkey or ham with cranberry sauce. Families from Eastern European origins favour turkey with trimmings, keilbasi (a Polish sausage), cabbage dishes, and soups; and some Italian families prefer lasagne! Some Americans use popcorn threaded on string to help decorate their Christmas tree. Making gingerbread houses is also popular as Eggnog, a ‘traditional’ Christmas drink in the USA. 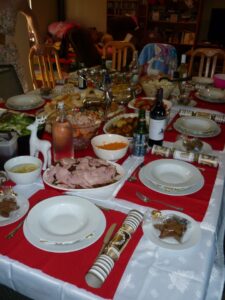 Many Americans, especially Christians will go to Church to celebrate the birth of Jesus at Christmas. Many churches have special Christmas Carol services and events where the story of Christmas is told. In New England (the American States of Massachusetts, Connecticut, Rhode Island, Vermont, New Hampshire and Maine), there are shops called ‘Christmas Shops’ that only sell Christmas decorations and toys all the year round! People in America like to decorate the outsides of their houses with lights etc. Some cookies and glass of milk are often left out as a snack for Santa on Christmas Eve.

VIETNAM – by James Cooper
In Vietnam, Christmas Eve is often more important than Christmas Day. Christmas isn’t an official public holiday, and many people think it’s only a holiday for Christians. In Ho Chi Minh city (which is the largest city in Vietnam and used to be called Saigon) people (especially young people) like to go into the city centre, where there is a Catholic Cathedral. The streets are crowded with people on Christmas Eve and in the city centre cars are not allowed for the night.

People celebrate by throwing confetti, taking pictures and enjoying the Christmas decorations and lights of big hotels and department stores. Lots of cafes and restaurants are open for people to enjoy a snack!

Vietnam used to be part of the French Empire and there is still French influences in the Christmas traditions. All churches, and some Christian homes, will have a nativity crib scene or ‘creche’. Many Catholic churches have a big scene with nearly life size statues of Mary, Joseph, baby Jesus, the shepherds and animals.

I hope you enjoyed our quick jaunt around the World. From GSQ we wish all our readers a happy and joyous Christmas celebrations  with a healthy and safe New Year.