“This reads well”, she said and I felt I should fill the ensuing pause with an intelligent, perhaps even witty, comment.  “Let’s do it”, I replied.  Okay, not really intelligent or even witty, but as a result I found myself sailing with my mother and 140 others, along the Rhine and Danube Rivers, through Eastern Europe recently.  While the focus of this journey was not my family history, there were several experiences, genealogical by nature, that I very much want to share with GSQ’s blog followers.  Rather than to provide definitive answers to questions, the aim of sharing these experiences is to encourage family historians to think creatively and consider new approaches to their research.

The small German village of Miltenberg is like many others throughout this fascinating region.  Stunning scenery as the Rhine runs through green, poplar covered hills and picturesque homes with peaked red roofs and whitewashed walls.  An ornate fountain in a market square and shops selling locally made breads, sausages and clothing.  A strongly Roman Catholic area, public and private, secular and religious buildings display symbols relevant to this Christian denomination.  Niches built into external walls hold statues, painted wood and gilded metal, of the church’s saints. 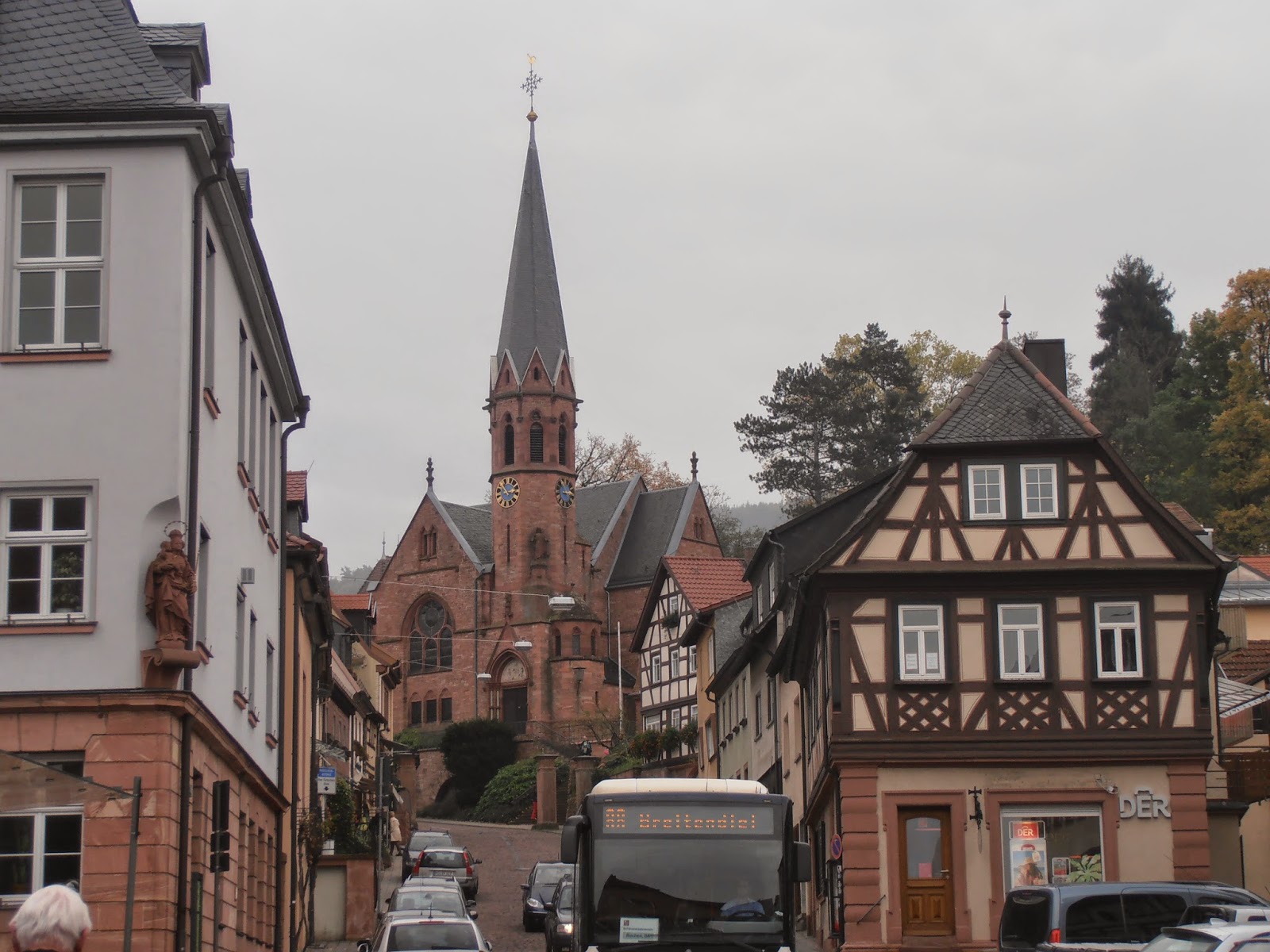 Against this backdrop, looking toward the hills behind the town, stands the local Protestant Cathedral, brown brick and rather modern in style.  Almost as an aside, our tour guide pointed to the cathedral’s steeple and in particular to the metal orb at its apex.  Cathedral staff, she told us, began many years ago to place church records into the orb to protect them.  The practise continues to this day, with those responsible making regular deposits into this unusual repository.  The genealogical part of my brain went into overdrive:  Would I ever, I asked myself, have thought to ask an organisation, religious or secular, to check the orb atop their building for any records that might assist me in my research?  This short, almost throwaway comment gave me fresh permission to question, even ruthlessly challenge, assumptions that undergird my current methodologies.  Dancing the ‘family history happy dance’ on Miltenberg’s grey, cobbled streets gave me such joy and I was surprised and delighted all over again at the gems waiting for genealogists to discover them, often where and when we least expect it.


“I will interview them”, said the tour guide responsible for leading us through the historical and aesthetically spectacular Austrian city of Salzburg.  We had just walked through the beautifully landscaped gardens of the Prince-Bishop’s palace.  Outside the ornate, black gates our guide introduced us to two journeymen.   Hearing that term caused my genealogical antennae to begin to quiver.  I have seen it used as an occupation on census returns and understood that it meant simply “Apprentice”.  Hearing this young couple describe their modern day lifestyle opened up my understanding of this word and what it could have meant in my ancestor’s time. 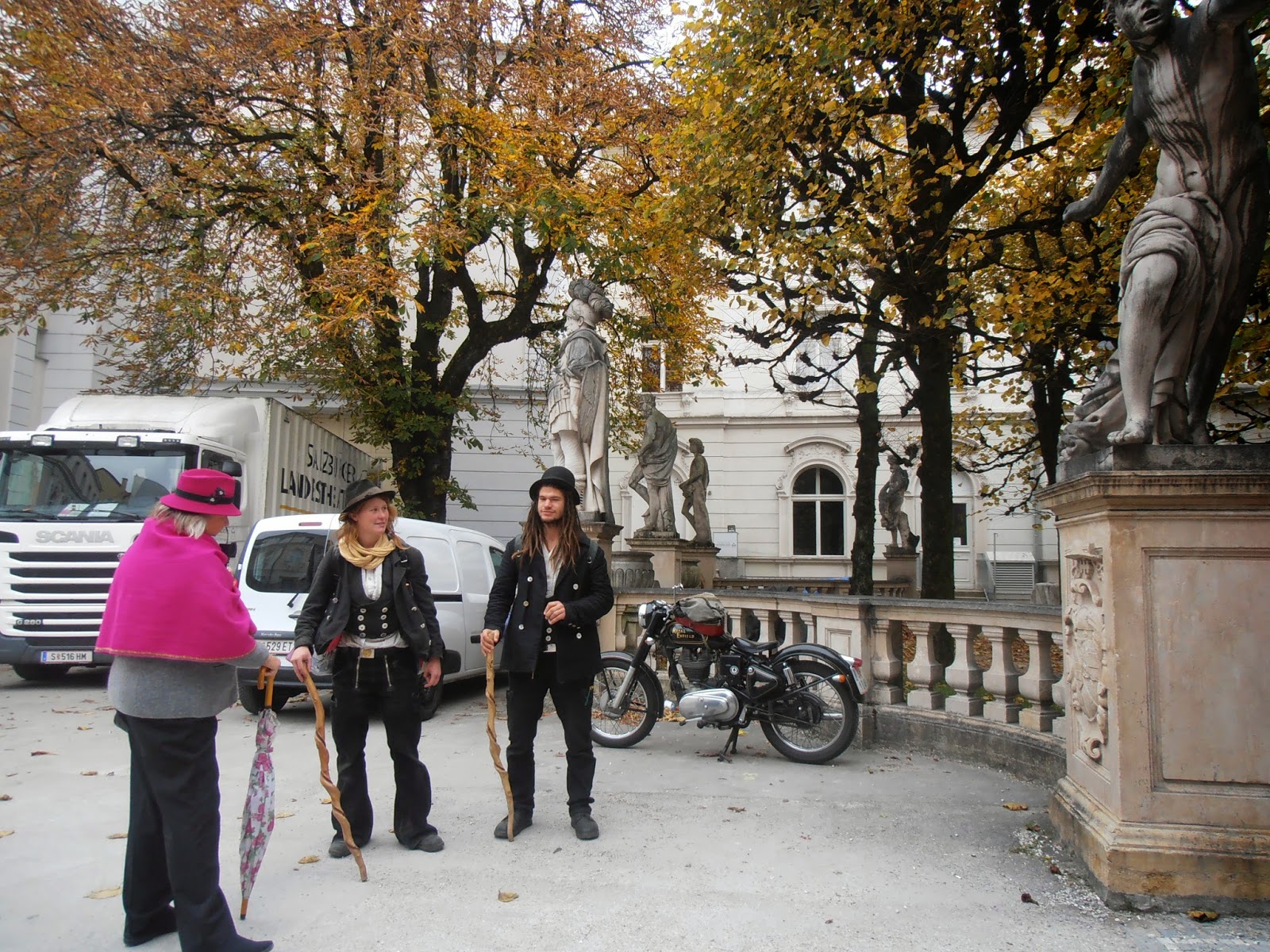 Dressed very casually, looking a little scruffy in their jeans and worn jackets, both toted small packs the same size or smaller than the handbags most of us carry because, ”…they are heavy enough”.  We discovered that the girl was a carpenter and the man, his brown hair in dreadlocks, an artist.  It seemed he carried with him the tools of his trade.  Journeymen constantly travel, staying in each town for no more than three months.  Asking townspeople for work in line with their abilities, the aim over a period of three years, is to hone their skills.
It was an occupation that came to life for me in the most exquisite of outdoor classrooms. What a wonderful moment of genealogical serendipity it was, to meet these young people and, under a grey, Austrian sky, to learn more about an occupation they share with my ancestors from the Scottish Borders.  It now remains for me to further explore the similarities and differences between the two.
Salzburg held more in store for me than it is possible to tell here, but one experience struck a genealogical chord.  A city within a city, St Peter’s Church, is more than a single building, impressive though the cathedral is.  The complex currently includes an open square, function rooms with a restaurant and, in the hill behind it, a series of catacombs, into which members of the public can climb. There is also a small chapel next to a cemetery.  And what a delightful cemetery it is.  Quirky, historic, artistic.  The graves are set into various ground levels, so while you stand at the foot of some, other graves are above the height of your head.  Some markers, set into the sides of the 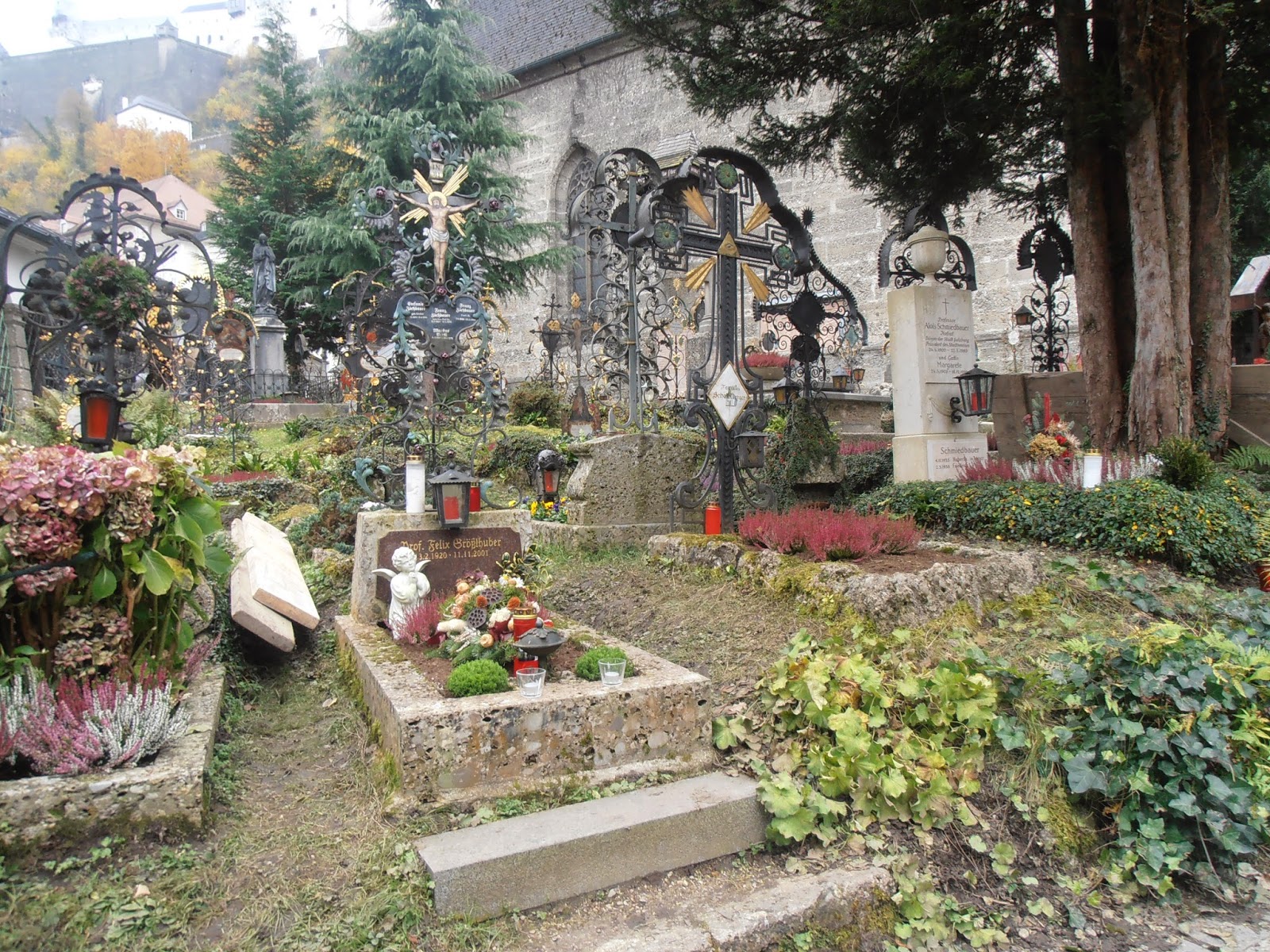 various levels of undulating earth, are made of sandstone, engraved with the details of the deceased.  Less familiar to my Australian eyes, were the metal, ornately and colourfully decorated markers, in different shapes and sizes that identified the graves that seemed to me to be randomly placed across the Church’s consecrated ground.

Failing dismally to keep up with my own tour group, as we meandered through the graves and family tombs and passed the catacombs above us, I was gradually overtaken by the crowd behind us.  This second group had stopped in front of seven markers.  “Tradition says he [inaudible]ed them to death”, their guide said laughing, the group tittering appreciatively behind her.  “He what?” I exclaimed or yelped or shrieked.  “Tickled them to death!” she answered.  Apparently the man had married six times and become a serial widower.  The cause of each wife’s death remained a mystery until the last one ‘spilled the beans’.  And people think cemeteries are dry, uninteresting places! 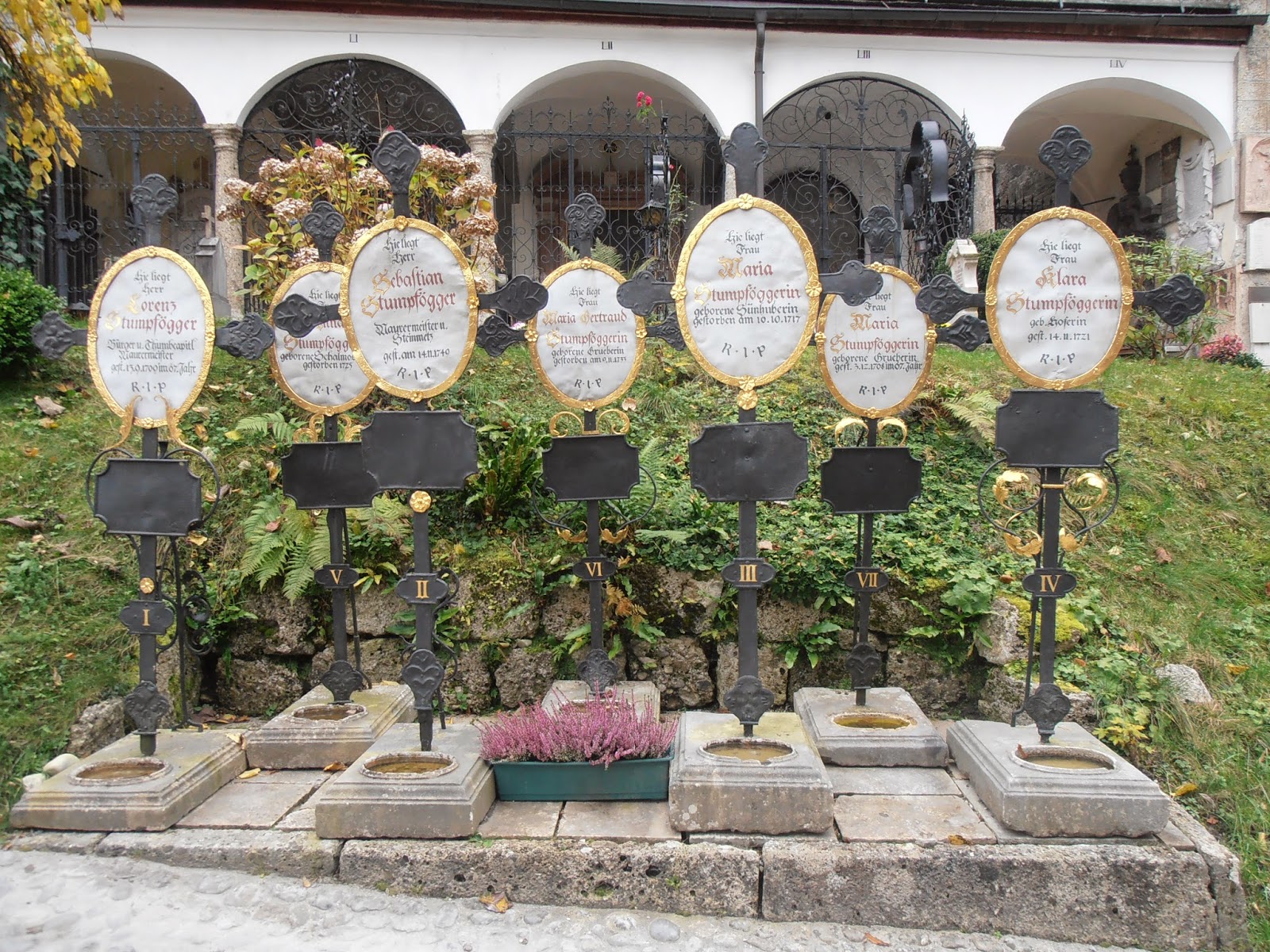 While taking in the beauty and historical resonance that surrounded me, I came across a modern war memorial with a freshly laid wreath.  A delightful, elderly man was struggling to load film into 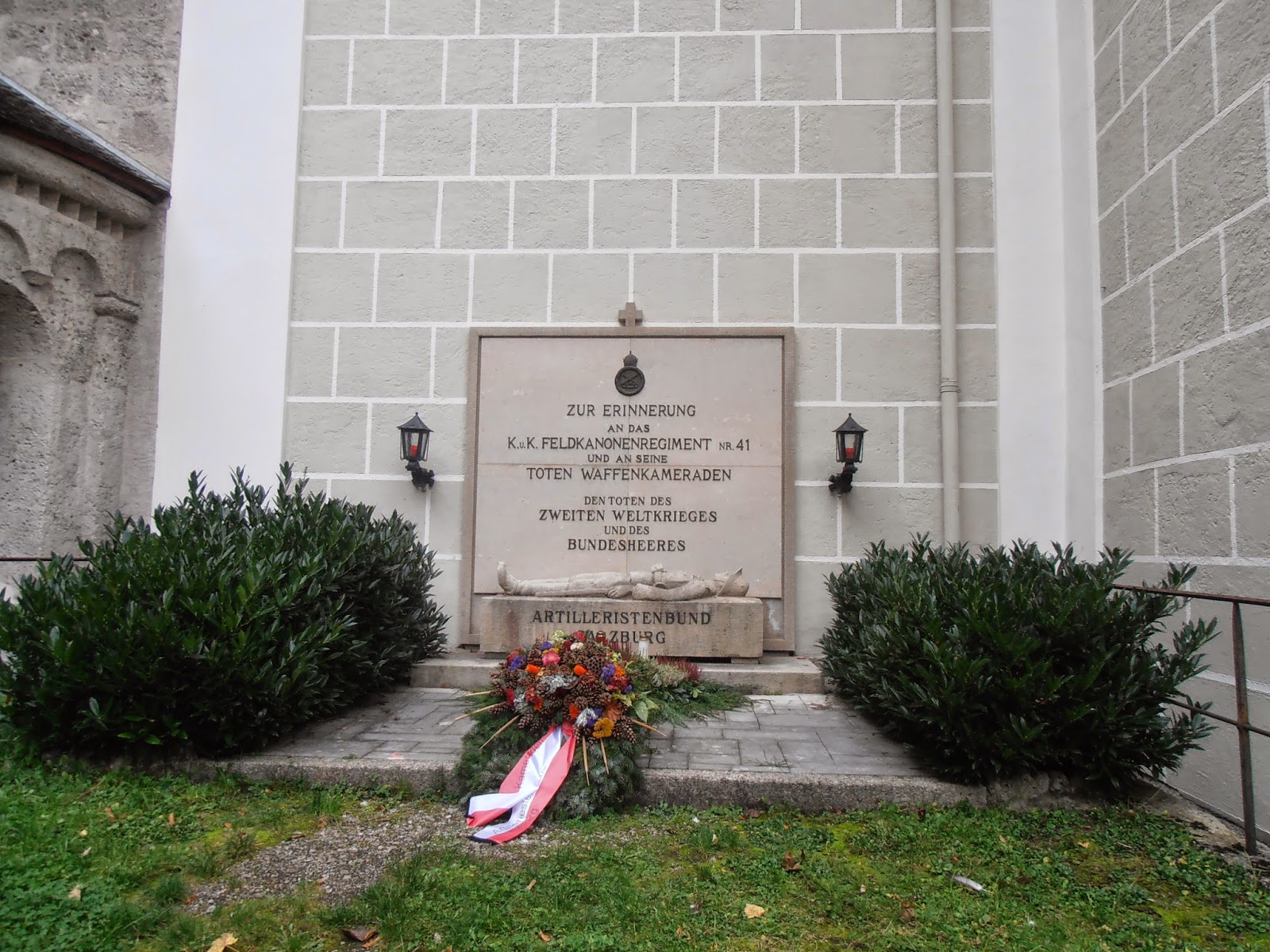 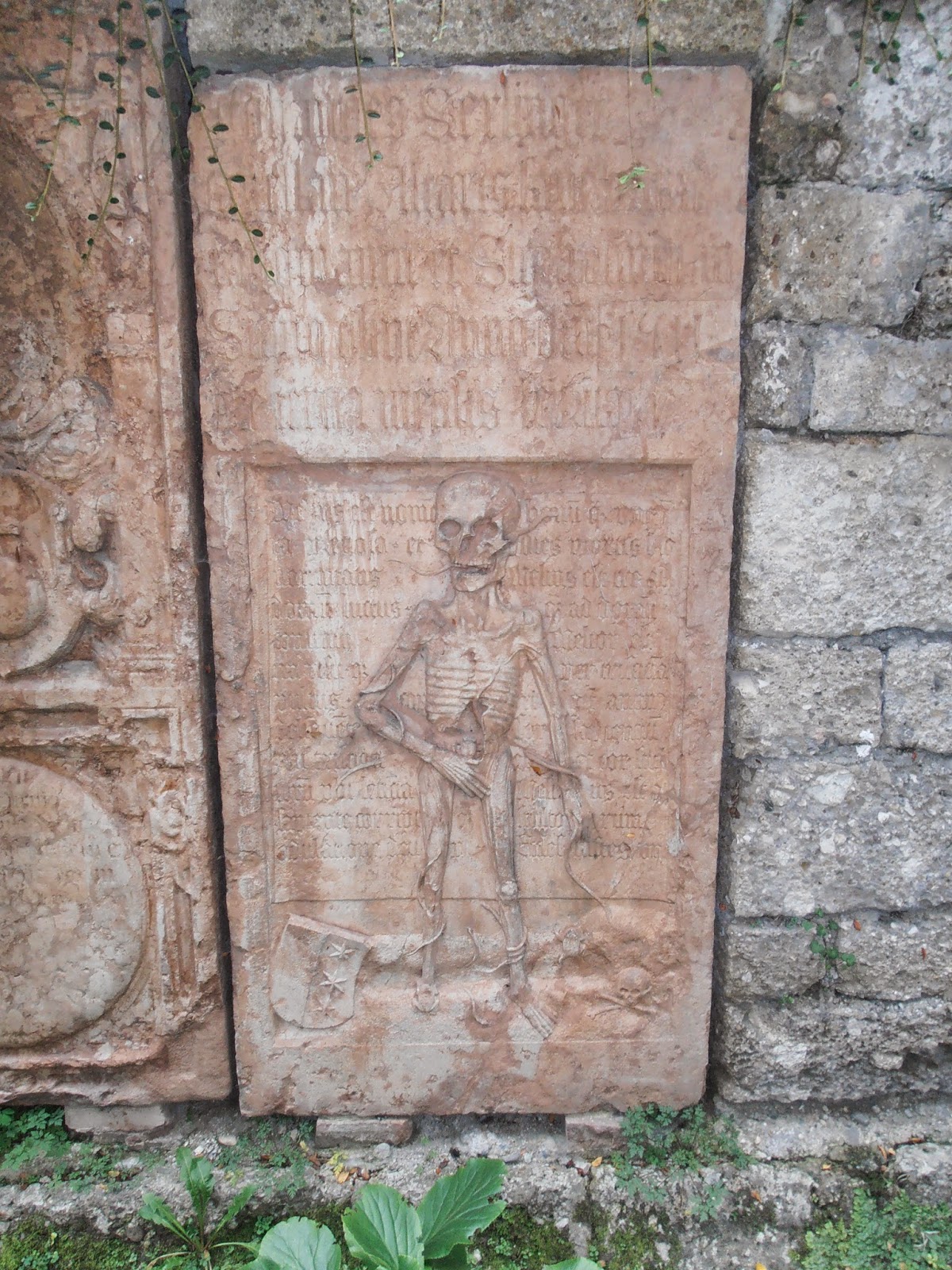 his old fashioned camera.  It never ceases to amaze me when I travel overseas, how possible it is to communicate when you don’t share a spoken language.  I loaded the film for him and he wanted me to take a photograph of him in front of the memorial.  He pointed out to me one of the oldest and most intriguing graves in the cemetery, dating to the 1500s.  He indicated that he was moving on to the chapel and then, all of a sudden, he was gone.  A moment in time, to be appreciated, then remembered.  I would appreciate hearing from anyone, perhaps from GSQ’s Military or German Special Interest Groups, who could translate the inscription on the memorial for me.  In this way I might be able to tell what drew my unnamed friend to this particular spot.

This cruise was a personal holiday.  I expected to see cathedrals and synagogues, castles and ruins and stunning scenery.  To take in history and culture, architecture, language and the arts.  I was not disappointed.  I didn’t expect to find genealogy but genealogy certainly found me!