↓
GSQ Blog→photographs→The biscuit tin for tarts
Since last month’s post, I knew I’d write again about my grandmother’s biscuit tin and its contents. Though when I went to photograph the tin itself, I discovered it was not a biscuit tin, but instead held tarts. I can see part of the label, which suggests the tin held 500g of ‘Frederick Aussie Jam Tarts’ (possibly a word or two missing) that should have been eaten before April 1995. If my grandmother moved the contents of her suitcase over to the tin shortly after eating its contents, she must have thrown out the rest of the photographs/documents/goodies not long after I failed to show an interest! Anyway, here’s a photo of the tin, which features a reproduction of Frederick McCubbin’s ‘On the wallaby track’. 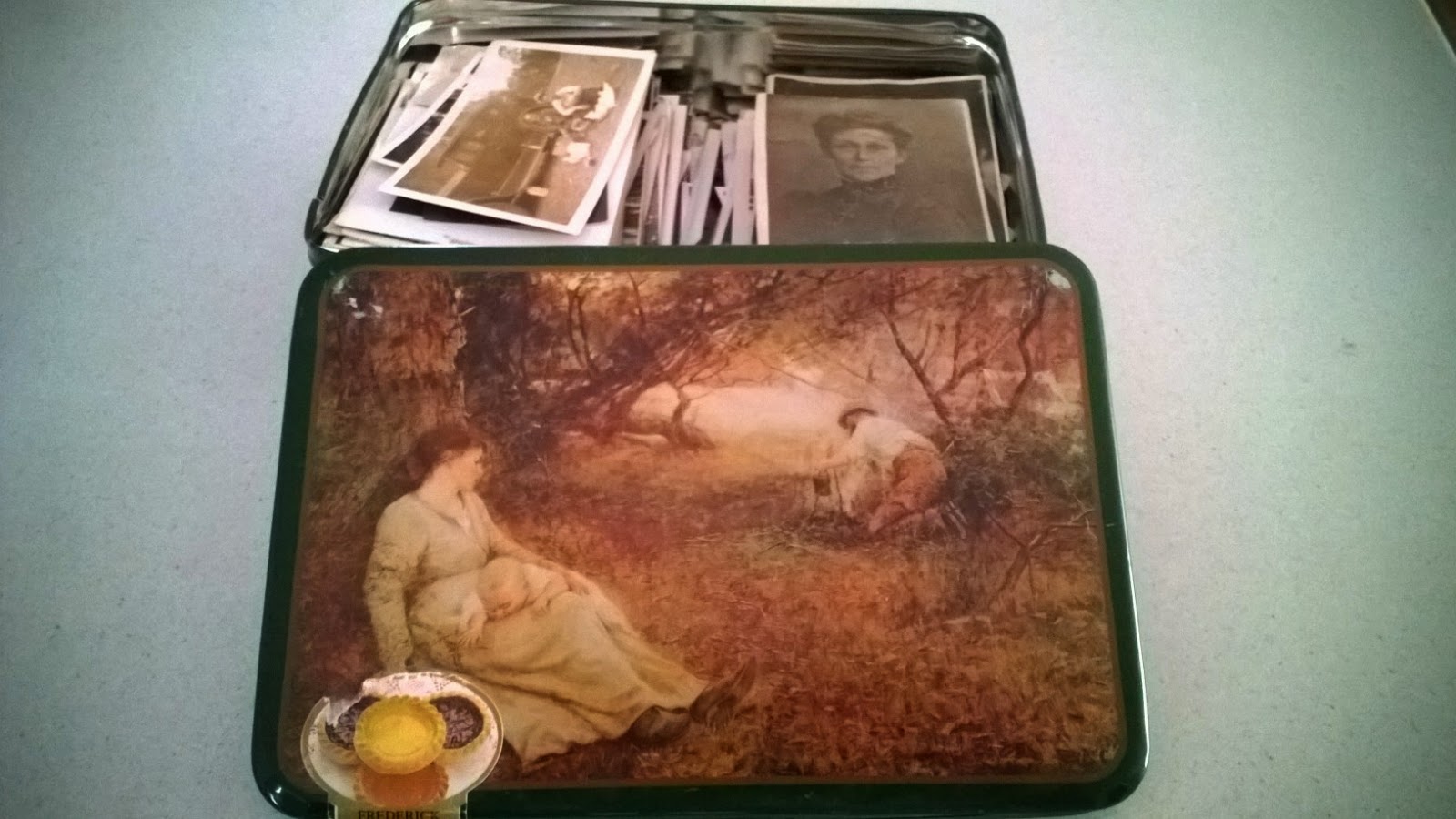 I’m assuming, by the tarts’ use-by date, that the tin didn’t hold any significance in itself, and while she may have chosen it for its artwork, I think it was probably a gift.
When I first went through its contents with my mother, we had a lovely time looking through the photos and postcards. My mother recognises only the family members she knew – her brother, cousins, parents, grandparents, aunts and uncles – so we were completely reliant on captions on the backs of photos to guide us as to who was who.
Which was frustrating. While several do indeed offer useful information (which wasn’t apparent until I’d started researching), most of them have nothing written on the back, or possibly worse, captions like ‘5 years ago’, ‘Having a good time’ and my favourite (which I couldn’t find to share) ‘You can keep this if you like, dear.’
I suppose they weren’t thinking about future generations when they wrote on photos.
I have not made any progress on the vast majority of images in the tin, however, the photos have been a great help in my research in small ways.
A distant cousin I made contact with shared several photos of my great-grandmother’s family that she left behind in the UK, and amongst what he scanned and emailed me was a photo I have two unidentified copies of. Thanks to him, I now know it is my great-great grandmother.
My great-grandmother received regular correspondence from one of her brothers and his wife, and they wrote on many of the photos they sent. By matching her handwriting and using dates, names and so on when she did supply them, I have been able to identify more people in the photos than I ever would have otherwise, as well as to offer me a glimpse of her (the sister-in-law’s) side of the family and the annual holidays they had.
Matching handwriting has also helped me group some of the photos together, even though I might not know anything else. And using imaging software has helped to match some of the photos I have scanned, to suggest a photo of one person might be the same person as in another photo. Though this is a bit tricky, as the software isn’t always right and it can be difficult to know. And I haven’t scanned many of the photographs.
I’d love to hear about your photos. Is there one that gave you a big clue with your research? Or maybe yours have similar captions to mine. What were your family’s photos kept in?