Several recent events have once again highlighted for the co-writers of this blog (Bobbie Edes and Pauline Williams) the value of ‘going local’ as information about your family history can turn up in unexpected places and may not be available anywhere else.

Earlier this year we had a short holiday with another friend on Magnetic Island. One day we drove down to Picnic Bay to investigate the Island’s History and Craft Centre. One of the old buildings, the Butler Hut, comprised the history centre and Magnetic Museum, and the craft centre was located in the old Picnic Bay State School.

The Butler Hut had one room devoted to the Butler family who had developed the first resort on the Island. A second room contained copies of all records relating to the Island and its residents, including parish records, land records and so much more. The mission of the Museum is to preserve the history and cultural heritage of the Island and to share that with visitors and locals. It has a presence on Facebook at Magnetic-Museum. This was an unexpected find and really well organised and displayed; the volunteers who manage the Museum and Craft Centre are more than willing to help if you have ancestors who spent some time on the Island – none of us did.

Another island which recently came to our attention was the Isle of Man – a small island in the Irish Sea between Ireland and England – the nearest port in England is Liverpool. A GSQ member revealed at one of our Wednesday Zoom sessions that she had discovered a range of local resources when undertaking research on the island. The Imuseum (https://www.imuseum.im/) allows you to search for people and places and to conduct a search in the Archives. Another interesting repository is the Manx Museum (https://manxnationalheritage.im/our-sites/manx-museum/). Managed by Manx National Heritage, it is located in Douglas, the main town on the Island and covers 10,000 years of the Island’s history up to the modern era.

Mention of the Isle of Man prompted me to look again for the birth or baptism, death or burial of the penultimate sibling of my maternal grandmother. A burial record was found at the imuseum for Walter James Paddock, 4 days old, in Onchan in 1917, and an image was located on familysearch.org. No details are provided of parentage, but the details matched those provided many years ago by a great-aunt. As an aside, several of my great grandmother’s 12 children died young and at least 4 as babies. It is thought that they died because the Rh factors in the mother’s blood group did not match with those in the baby’s blood group. If a Rh negative mother has been sensitized to Rh positive blood, her immune system will make antibodies to attack a subsequent baby with a Rh positive blood group – giving them the name of blue babies, and usually resulting in an early death. This occurs during pregnancy and while it is now treatable, it wasn’t at the time she was having babies.  As an even more interesting aside, I inherited the Rh-negative blood group, as did one of my nieces, and it is most likely that this came down through the maternal line.

Returning to the theme of going local, it is usually the case that the volunteers working in local museums or archives have a great deal of local knowledge, and they can help you in ways which would not be available online. I have previously posted about the archive in my home town of Swadlincote in South Derbyshire called The Magic Attic. A visit to this  archive, which is located in an old pottery kiln proved invaluable. They had acquired originals of the local newspaper, The Burton Daily Mail, which could no longer be stored at the newspaper offices.

As well they had a huge number of photos of local people and events.  When I said I was looking for photos of the house where I used to live, since demolished, the volunteers remembered seeing some photos and spent the next couple of hours helping me. My dad had racing pigeons and they found photos that had appeared in the local paper; as he been born and lived in the area all his life, they even chatted in general about the area.  Several local history books published by the Archive all helped to add context to a family’s life.

Continuing on in our North Queensland holiday with Pauline heading home, my friend and I drove out to Charters Towers, a town that has now had a revival after its golden heyday in the latter part of the 19th century. As many of its 1800s buildings have now been beautifully restored, the town has become a significant tourist stop-over. However, our visit was not only for that reason, but also to research the lives of my mate’s grandparents and great-grandparents while they lived there.

The helpful folk at the Information Centre gave us directions to the Charters Towers & Dalrymple Family History Association along with a brochure listing a contact number. Having made arrangements to visit their rooms the following day, the local volunteer then spent a couple of hours helping us go through the various records they held. Their collections were immense and well organised, and within minutes my friend had a large file of previous enquiries including a substantial family tree that they had received on her Pope family. Looking further we found copies of school photographs, newspaper items, and information about life in general at that period. 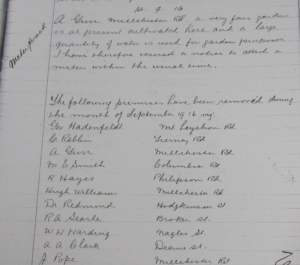 That afternoon we continued on with our research and visited the Excelsior Library; in a room set aside for the Charters Towers Archives, Michael Brumby the Archivist spent a considerable amount of time looking through their treasure trove of files. From him we were able to establish the location of the great-grandparent’s home in Millchester and the exact month of September 1916 that the house was removed (totally) to another region, which coincided with electoral roll entries of the Pope family relocating to Townsville. This gem of information was gleaned from the local water-meter man of the time – we found it amazing that such information was available! As an aside, Michael told us that many houses were relocated to the Railway Estate in Townsville.[1] We were also assisted with school enrolment details and a detailed map of the period. 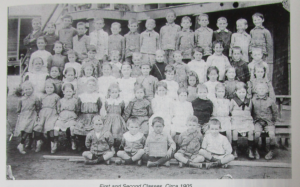 Leaving Charters Towers we ventured to Ravenswood, now a very small mining community 130 klms (80 miles) South West of Townsville. The Ravenswood Courthouse Museum was another fount of information with the local expert providing us with extensive assistance in researching the Turner/Wyllie family. Here we found many school rolls, early electoral rolls, school photographs, family group sheets and Pioneer Register entries. Unfortunately there is no detailed plan of grave locations at the Ravenswood Cemetery on the outskirts of the area, which was disappointing. However a visit there to pay respect to Sarah Turner (ms Robbins) who passed away on 9 August 1904 three months after the birth of her daughter Isabella was a sobering reminder of the harsh conditions of those times.[2]&[3] 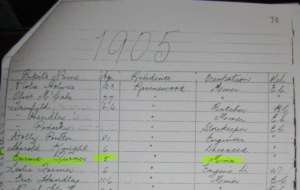 We were very grateful to the volunteer and her husband who kindly opened up the rooms of the Charters Towers & Dalrymple Family History Association for our visit. It appears to be a rather sad story, possibly found in many local associations around the world in these pandemic times, of an ageing membership and dwindling volunteers. However, local associations/societies have a wealth of knowledge as our individual visits proved, so let’s hope that they get the assistance some badly need. 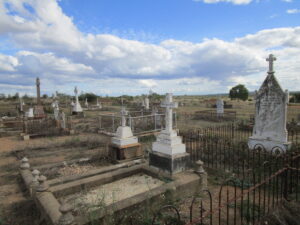 We hope this post encourages you to seek out local history societies, museums and other resources to help you in your quest to research your family’s history.