Thought I would share with you, some of the highs and lows of my family history research.

Years ago, after researching at the State Archives and the local Council, I was able to find the address of where my Great Grandparents, Christian and Anna Nebe lived when they first settled in Queensland. Having to go to Toowomba I decided to call in to find the place. Only when I got there, I realized I didn’t have my camera. So I decided to come back another time, and, with a camera!

A few years later, I had then found the address of my other Great Grandparents, Christian and Ernestine Ruthenberg, and Gerhard and Whilemine Stolzenberg. As they were all in the same area I decided to visit the three, this time with my camera. (Of course, if it was now, my phone would do the trick!)

I first visited Lowood and found the Ruthenberg house. I already had a photo of this house so didn’t need to take a photo there, but it was great to see it in real life.

Next, I went to Tarampa and found where the Stolzenberg house had been, but a more recent house had been built there. Having decided to brave it, I approached the occupants and told my story, that my Great Grandparents had had a house on this property. They pointed me in the direction of the remains of the old house. There remained only a couple of stumps, but you could see where the house had been. Now, walking around I discovered that we were high up, and looking down I could see Lowood in the valley below. Wow, I thought this has solved a mystery for me……

My grandfather, Henry Stolzenberg, married Alvinie Ruthenberg. The interesting fact here is that Henry was a Catholic and Alvinie was a Baptist, and so never the twain should meet. My mind then composed all sorts of stories. I could see the two of them meeting half way up that hill in secret, and you can imagine the rest.

After feeling quite jubilant at solving that mystery, I journeyed on to Withcott to see where the Nebes lived. Once again I was lucky to find someone home. So once again I explained my story.

“You are too late,” replied the present owner, ”we pulled the old place down a few months back.” Feeling quite sad, I walked up to the site, and took a photo of what was left, where the house had been. All I could think was if only I had brought my camera that other time!

Another disappointment for me was, that as a child, I had visited my other Great Grandparents’ house every Christmas holidays. However, not thinking about family history then, I never asked any questions of my Great Aunt Eva. She was the youngest of the family and lived in the family home. She would have been able to tell me many stories and fill in the blanks.

Perhaps if any of you who read this are new to family history, the moral of the story is, “Seize the moment”. Don’t put things off.

While my Family History journey has been both exciting and disappointing, I am really happy with the information I have gathered over the years. Also I am often surprised at how much new information I can find these days, even though I thought I knew it all!

Happy researching and don’t forget your camera (or your phone)! 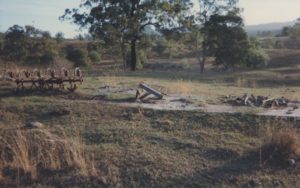 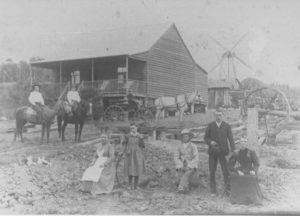