I recently attended the AFFHO Congress on Norfolk Island. Attending any conference or education session can inspire you to rethink your approach to your family history. Idyllic Norfolk Island is steeped in history – the first settlement, the penal settlement, the arrival of the Pitcairn Islanders.

The talks at the Congress focussed on different aspects of the island’s history. One thing that became clear, if I needed reminding, was that history is the history of those in charge, i.e. the winners.  This leads me to wonder how often we question the perspective or point of view that authors take when writing of historical events?

One keynote speaker was broadcaster and journalist Ray Martin. He related his experiences when his family story was uncovered through a Who Do You Think You Are? episode. Uncovering his heritage, including his indigenous ancestry, helped him to place his family in a historical context. He told the stories of two of his ancestors in more detail and also highlighted some documentaries that he had produced – his interest in history shone through.

The other keynote speaker was aboriginal lawyer, writer and filmmaker Larissa Behrendt who gave 3 talks at Congress, two based on her novels Home and Legacy, and the third which was an investigation of the Eliza Fraser story. The Eliza Fraser story resonated strongly with the general population, not only of the period, but subsequently and has been embellished over time. Larissa argued, however, that the “accepted version” contains significant flaws if viewed from an indigenous perspective rather a colonial or colonist’s perspective.

The talks I attended presented different perspectives of convict lives – from the brutal penal regimes on Norfolk Island and Moreton Bay to convicts finding love and a future together. My own talk told the story of a father and son who were convicted of machine breaking and transported to Van Diemen’s Land in 1831. After receiving a free pardon they were joined by other family members who came out as free settlers. They were able to carve out successful lives for themselves and their descendants, who are found in Victoria, Queensland and New South Wales. The opportunities that opened up once their penal sentence was over were unlikely to have been available in England or Ireland. Congresses and conferences often provide serendipitous encounters – another Congress attendee had a machine breaker ancestor who was transported on the same ship as the convicts that I had researched.

Other speakers discussed immigration to Australia, the lives of women, and aspects of Norfolk Island history itself. Two interesting presentations considered how mapping the landscape can reveal different stories. Asking several questions when analysing photos and maps can help to reveal the stories behind the image or map: who made it? when? why? was the image a conscious or unconscious idea of the creator? what’s in the corner – zoom in and see the small details that may not be evident at first glance.  These questions can also help when we return to the Eliza Fraser story; how writing from another point of view can reveal a quite different story.

I hosted a meeting of GSQs Writing Group upon my return. As the next in our series of short story exercises, I asked the Group to write on a topic of their choice, from a perspective different from their current one. The aim was to gain greater insight into what we can truly know about individuals, be they forebears or even ourselves. The exercise was also intended to help members appreciate that our perspective, or point of view, may influence the way we write about others and historical events. Is it possible to walk in the shoes of a convict ancestor for instance – or do we need to acknowledge that the best we can do is walk alongside them by researching the context of their lives?

21-year old convict Willm McCulloch executed for his role in the 1834 mutiny.

The stories submitted took us into different worlds, as happens each meeting. Why was one ancestor seemingly written out of the family’s story? Research into the traumas he experienced as a child perhaps provided clues to actions which led to the rift with the rest of the family.  Women accompanying British Army soldiers were seemingly written out of the history books as the focus was on the victorious men who won battles. Records of the lives of women accompanying the defeated – in a different language – give a much broader view of what life was like for them. Were boys and girls treated differently in our younger days? If they were then their memories and perceptions of family members and events could differ widely. Diaries can give an insight into life in challenging circumstances, such as on the goldfields, but what if your ancestor didn’t record everything or anything. Someone else in the same or similar circumstances may have, so it’s worth searching for such accounts. How did migrants adjust to life in a new country? Learning new customs and languages for example can challenge the expectations of the newly arrived, even those who think they know what the new country is like.

The discussion around these stories demonstrated that, as writers of family stories, we need to be aware of our point of view when we write our stories. Care needs to be taken not to impose our present-day mores or attitudes onto our ancestors. Perhaps the way we write our stories reveals a lot about us, as well as those we’re writing about.  If we want to do the best we can by our ancestors in preserving their stories and their place in our family, then it is well worth taking time and acknowledging the perspective from which we’re writing.

Not all the time on Norfolk Island was spent at the Congress. The convict cemetery, the historic convict settlement at Kingston, Government House and beautiful colonial homes on Quality Row that were occupied by administrators, all helped to build an environment which is treasured by its population. 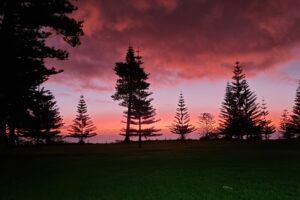 Sunset at the Congress dinner at On Dar Cliff

The Islanders appear to have an easy relationship with their history, commemorating the positives as well as the negatives of past events. The Congress theme of History in Paradise certainly lived up to the name.