Well, this is the third in a row, so I guess that makes it a series! Last year’s piece was a bit big picture, what is the world coming to. This year is more family focused. 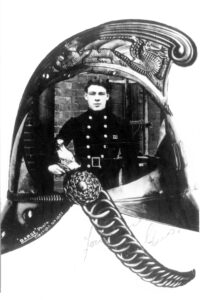 My father’s father, Augustus Theodore (Gus) Cass (born 1886), joined the Melbourne and Metropolitan Fire Board (MMFB) as a fireman in about 1907. This undated photo of him, resplendent in his full uniform, must have been taken very early in his career, judging by his youthful appearance. There is a strong family resemblance – the first time I saw the photo, I wondered what my younger brother was doing dressing up. We have a little information about Gus’s service, courtesy of the then MMFB Museum, and his long-service medals. Because we lived for many years in another country, when we did visit Melbourne, “Papa” was already retired and ill. I never really knew him, so having these few items provides some sense of connection.

Side issue, but I think very relevant for history generally and family history in particular: The Museum, now the Fire Services Museum of Victoria, is run entirely by volunteers, all with a current or former connection with a fire-related agency. On the day we visited, the volunteers on duty told us that the Museum holds old personnel records no longer required by the Fire Board. A very sensible arrangement which preserves history otherwise gone for ever.

Gus married Katie McKenna in 1914. More information about his service came from a memoir written in 1988 by my aunt Olive, Gus and Katie’s older daughter and the second of their four children. Gus was posted to at least seven different fire stations, and he and his family lived in Fire Board flats or houses near his station until they bought their own house near the Essendon Fire Station in 1929-30, and this was the family home until sold in the late 1960s. The house was later knocked down and replaced. 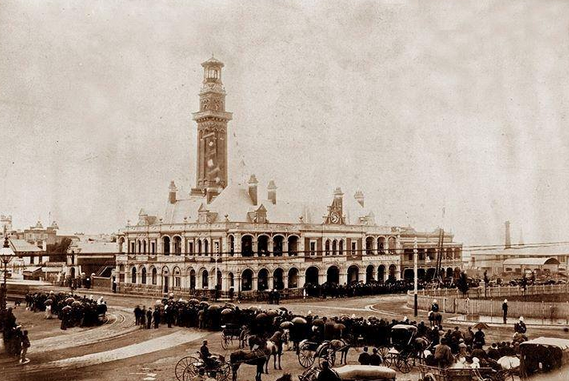 Fire Services Museum at 39 Gisborne St, East Melbourne. Thanks to https://www.facebook.com/FSMVic for copyright permission to use this lovely image.

Olive said that at this time money was very tight, and she had to leave school at fourteen because they could not afford the fees and “Mum said girls didn’t need an education as much as boys did.” At fifteen Olive went to work doing hand-sewing at Buckley’s department store. I have only scraps of information about Olive’s subsequent training as a nurse, her achievement of triple nursing certification, or her career in Victoria, Western Australia, Central Australia and briefly in the Territory of Papua. 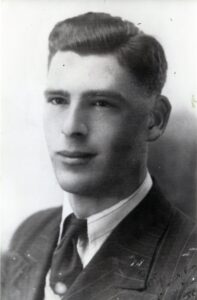 My father Les, the youngest of Gus and Katie’s children, was born in 1924. He undoubtedly benefited from his mother’s views on education, although as shown by a recent search in Trove (wonderful resource!) by Family Historian Pauleen Cass, Les also won scholarships which enabled him to complete primary school and undertake secondary education at the Christian Brothers’ Parade College in East Melbourne. Trawling through the student-produced College magazines of the time, I discovered that amongst other things, he won the Underwater Walking Race at a swimming carnival and received a bravery medal for saving a man from drowning in the local river.

During his Leaving Certificate (Year 11) year, Les applied for and won a Teaching Scholarship. The assessment process included preparation of an early-primary lesson plan, presentation of this plan to a selection board and his Year 11 colleagues and at least one interview. Les’s Education Department record shows “Completed Rural Training 19/3/42” and that on 26 May 1942, two months short of his 18th birthday, he was appointed as a Teacher Trainee Third Grade on probation Under Bond – Teaching Scholarship.

The record does not specify what Les did for the first twelve months of his scholarship. The next entry is:
Temp HT3 May ’43 ceased 31 December ’43: Has been very successful in opening a new school: pupils have made very pleasing progress.

So off you go at 19, open a new one-teacher school and run it for 8 months. One way of seeing if you have what it takes! I don’t recall Les ever saying specifically where this was, although I had the impression that it was somewhere out of Colac in Victoria’s south-west and required a horse-ride. I do remember him saying that, as he stepped down from the train from Melbourne, one of two older gentlemen sitting on a bench on the platform said “G’day. You the new chalkie? When was the Battle of Malplaquet?” “Umm 1709”, said with as much confidence as could be mustered. “Right. You’ll do!” The only other comment I recall was that at the end of the week, after paying his board and lodging, Les had enough money left for a Saturday newspaper or a packet of four cigarettes but not both.

And a successful career followed. 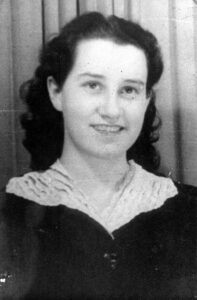 My mother, Janet Kathleen Edwards (Kathy and later Kaye) was the eldest of the three children of Lloyd Edwards and his wife Ellen Pentland. The family lived in Ouyen in Victoria’s Mallee and in smaller communities including Tiega. Because Ouyen did not have a high school, Kaye undertook her secondary education at Warracknabeal, boarding with Ellen’s sisters. On a visit to Warracknabeal a few years ago, on a ‘dead-relly’ expedition, we met a retired gentleman who said “Kathy Edwards? Of course I remember her. I used to see her through the fence dividing the boys’ and girls’ halves of the playground.” Was there a hint of nostalgia? We also saw a photograph of the student body with Kathy, on the very far left end of the very back row with an expression which said very clearly “No, I do not wish to be here” or something similar.

Kathy’s Departmental record shows “Completed Rural Training 18/2/42” and appointment as a Teacher Trainee 2nd Grade on Probation on 19 February 1942, at 16 and a half. Comments during 1942 included “Good student teacher, good material. Has quickly learned how to control a grade and shows promise of becoming a v.g. teacher.” Kathy spent 1943 as an acting Head Teacher, presumably at a one-teacher school, and commenced formal training at Teacher’s College in 1944, which would be where she met Les. There were comments that Kathy was “Cheerful but casual” and both she and Les received “Needs to develop a greater sense of responsibility.”

But they made it through and on into the world.

Editors note: The website linked above also has a section for family history enquiries which may prove useful to our readers:  https://www.fsmv.net.au/about_us.html#familyhistory
The Museum also has a great Facebook Page & Group with lots of images and helpful Admins
https://www.facebook.com/FSMVic. I’d like to thank them for their help with the article image.