Each year 8 March is recognised as International Women’s Day and many countries around the world, including Australia, celebrate Women’s History in March. It is only fitting that at the beginning of March we remember our female ancestors and the lives they led.

How did these women contribute to history? Was it something wonderful or totally significant on a national scale or was it something smaller and more at a community level? Very few of us have famous female ancestors whose names made it into the history books.

My female ancestors have no claim to fame beyond my family, but the lives they led contributed to the development of many localities across Australia. Without their pioneering spirit and ability to have children in the middle of nowhere we would not be here today.

In all honesty I do not think that I could have led a similar lifestyle. For example, I can remember going camping in a tent with my family each Christmas for a few weeks and having kerosene lamps (no electricity). Mum was always frightened one of us would set the tent on fire. Every morning we had to look out for the iceman so that we could keep food on ice in the esky. Four of us sleeping in a tent that was smaller than my study. I loved camping but equally all of us were very happy to go home. Yet this was the reality for our ancestors.

I only know three of my great grandmothers (I lost one when a DNA test revealed a well-kept family secret but that is a story for another time). Two were born of Irish and Cornish descent respectively, one in Queensland, one in South Australia and the third was born in Northamptonshire, England and emigrated to New South Wales.

Elizabeth Pollard was born in 1857 in Croughton, Northamptonshire and after the death of her father William, Elizabeth’s mother remarried George Judge, and the family all took the surname Judge. It took me many years to solve the red herring/brick wall this change of name created. 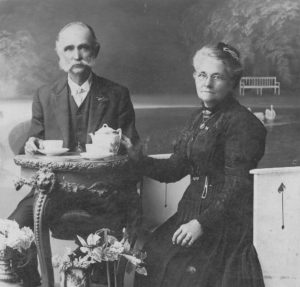 It was as Elizabeth Judge that she married Thomas Price from Wednesbury, Staffordshire in 1878. Shortly after their marriage the newlyweds emigrated to Sydney on board the Samuel Plimsoll. Together they had 10 children in various places in New South Wales and Queensland. They eventually settled in Charters Towers.

Elizabeth was widowed in 1918 and moved with the family to Townsville and later Brisbane where she died in 1944. My mother was 10 years old at the time and she remembered her grandmother always wore dresses with big pockets, filled with lollies for Mum when she got home from school. At the end of her life Elizabeth was blind and lived with her daughter Alice and my mother.

Of Elizabeth’s 10 children, eight predeceased her with two dying as infants. A well-travelled woman who knew a lot of heartbreak. 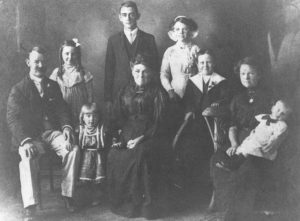 Herbert White and Dorcas (ms Trevakis) and their family

While in Copperfield her father James Henry Trevaskis disappeared, a brick wall still waiting to fall.  Her mother Elizabeth Trevaskis (nee Rosewarne) then married George Guy and had another three children. This blended family then moved to Charters Towers where Dorcas eventually met and married Herbert William White. They had eight children and Dorcas was widowed in 1924.

She moved to Brisbane to live with one of her daughters and died there in 1935. Her eldest son was tragically killed in 1900 after falling from his horse, one son never married, and the other son only had two daughters so there was no male grandchild to carry on the White surname.

Dorcas was another woman who travelled widely and knew the pain of losing a husband and child. 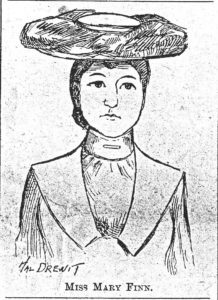 Mary Finn was born in 1886 at Petrie’s Creek (now Nambour) in Queensland and her parents were Irish immigrants from County Wicklow. Mary was the fourth of 10 children all born in south east Queensland or northern New South Wales. Another family who moved around, probably looking for work or just a place to call home.

We know from personal letters in a land selection file, that her father John Finn broke his leg badly and that it never healed properly. This probably impacted on his ability to find work and it was certainly the reason behind them giving up their land selection in Nambour.

Mary’s mother Sarah died in 1902 when Mary was just 13 years old. Her older sister Rose Anna was 16 years old and one assumes that they started to look after the younger children. The youngest was only two years old so life would have been difficult for Mary and her siblings after the death of their mother. 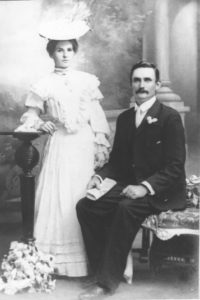 Her father John Finn also seems to have had trouble and his later years were spent separated from his family and in and out of asylums and hospitals. Mary married James Carnegie when she was 20 years old and together, they had 10 children. Her life with James was more stable and the family home at Kangaroo Point still stands today.

For the moment these are my three great grandmothers – all had difficult childhoods, moving from place to place, they all knew the pain of losing one or more children, all survived their husbands and had to adjust to life as a widow.

None were wealthy or worked outside of the family home and they all travelled widely, some further than others. Often, they were dependent on their eldest children for financial or physical support to keep the family together.

Their legacy is their descendants and I am proud to be one of them. It is my duty to write about their lives and keep their stories from slipping into the mists of time.

Is it time to start writing your female ancestors’ stories?