Johann George and Maria Barbara Heldt and their children, Peter, Nicholas, Elizabeth and Barbara, arrived in Australia in March 1853 on board The Helene. They were among the numerous German immigrant families who settled in the Clarence River District in Northern New South Wales. Johann and Maria were my 3xgreat grandparents. Their daughter Elizabeth was my 2xgreat grandmother.

It was whilst researching my Heldt ancestors, I got “lost” in Trove, as often happens, and came across the tragic story of the death of Harry and Agnes Long at South Grafton in 1919.

Agnes Long was born Agnes Clare Heldt in 1881 in Braunstone, the eldest child of Nicholas Heldt and his second wife, Scottish born Agnes. She was my first cousin 3 x removed. Henry Long (aka Harry) was born in Grafton in 1883, the ninth son of English migrant Josiah Long and his German born wife Caroline Reuther. After their marriage in 1906, young Harry and Agnes settled in the Seelands district on the Clarence River where Harry was a share-farmer on a property owned by Mr Ford. They had two children, Arthur Henry, born 1907 and Freda Agnes Caroline born 1909.

Each week, it was usual for Harry and Agnes to drive their horse and sulky into Grafton to conduct their regular business. It is reported, however that on this particular day, instead of taking their usual route driving down the south bank of the river and returning via the north bank and the Whiteman punt, they chose to make their journey in the opposite direction. After conducting their business, they then took the 1pm punt to South Grafton to return home. This change of routine was to have tragic consequences.

The newspaper headlines leapt out at me: “Startling Double Fatality”, “Shooting Tragedy”, “Husband and Wife Killed”. Well, now I was hooked and had to keep reading; another late night ahead!

The Daily Examiner on Wednesday 15 October 1919 began their report as follows:

“A shocking tragedy for which, perhaps, it would be hard to find a parallel in the long list of shooting fatalities in the State, occurred in Ryan Street, South Grafton, yesterday afternoon when as a result of a single rifle shot, supposed to have been fired at a distance of about 1200 yards, Mr. And Mrs. Harry Long of Seelands, were killed, practically instantaneously”.

Various newspaper reports, describe how, when the couple were adjacent to the property of Mr John Murphy in Ryan Street South Grafton, the horse suddenly wheeled around and the female occupant fell to the ground.[1],[2]&[3] Almost immediately the male occupant in the sulky fell backwards and then toppled to the ground. Agnes died instantly, Harry shortly after. The startled horse careered down the road, pulling the sulky behind it. It came to rest in a lane beside Aspinall’s blacksmiths shop on the corner of Ryan and Skinner Streets, thus alerting others to the calamitous event. Several reports of hearing gunshots were also made.

Dr Will Page attended the scene but was unable to save either Agnes or Harry. Two police officers, Sergeant Swan and Constable Dent, were summoned from Grafton to the scene where they found a male and female deceased. On examination, they found on the male, two puncture wounds one under each ear. They found another puncture wound under the right breast of the female. A formal examination by the Government Medical Officer, Dr Henry, was conducted. The bodies were then conveyed to the morgue at Grafton for a post mortem examination.

The Post Mortem showed that Harry’s wounds were consistent with gunshot wounds, he was found to have died from a severed spine, the bullet then passing into Agnes though her heart and lodging in her back. The extracted bullet was a .303 cartridge.[4]

As it happened, the SS Tintenbar owned by the North Coast Steam Navigation Company was moored at their nearby wharf unloading coal. Sergeant Swan paid a visit to the Captain of the ship, Sidney Drew Hannaford, and the following conversation transpired:

“Captain, I am Sergeant Swan. I understand that you were doing some shooting here about midday. “He said “Yes, I had a couple of shots at some shags.” Witness asked what he was shooting with, and he replied, “With a rifle.” Witness said “Show it to me “and he handed over the .303 army service Enfield, sighted at 1800 yards, at its fullest extent. When witness received the rifle, it was sighted at 400 yards. It was a repeating rifle. Captain Drew also gave witness three packets of cartridges (produced) and said “That rifle and ammunition were supplied to me by the Naval Department for the purpose of sinking any mines that I might come across.” Witness said “Show me the direction in which you fired the shots, and where the bird was that you fired at.” They were then on the bridge at the Captain’s cabin door. He pointed towards the sandpit on Susan Island, and said “At one over there”, and pointing below the sandpit, said “At one over there.” In regard to the latter direction witness judged it to be in a direct line to where he had seen the two bodies lying on the other side of the river. Witness then said “Well Captain, this is a very serious matter. There have been two persons shot, a man and his wife, on the opposite side of the river, at South Grafton. I will take this rifle and cartridges and see you later.”

Drew’s response was one of horror and remorse: “Good God Sergeant, that’s an awful charge. I can only say how very sorry I am it occurred.”

The Coronial Inquest conducted on the day following the incident concluded that 36-year-old Harry and 35-year-old Agnes had died as the result of “Effects of injuries feloniously inflicted on them by Sidney Hannaford Drew.”[5]

There seemed little doubt the bullet came from Drew’s rifle, it corresponded to those collected by Sergeant Swan. Drew was subsequently arrested and charged with manslaughter at the Police Court before Mr. E. A. May JP. A detailed account of the post mortem and court appearance was reported in the Daily Examiner.[6]

The trial of Captain Sidney Hannaford Drew was conducted at the Darlinghurst Quarter Sessions in November. Drew admitted firing half a dozen shots at shags, but in evidence said he saw the bullets strike the water and did not believe there was any danger. He believed the sight on the rifle was set at 330 yards rather than distance resulting in Agnes and Harry’s death.  Involvement of other crew members was discounted. Theories of the bullet ricocheting off the water or him having shot at a bird in flight were presented but were neither proven nor disproven. 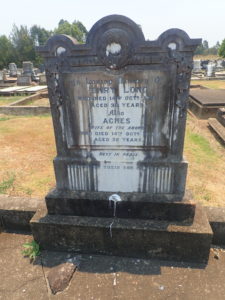 At the close of the presentation of the evidence by Crown Prosecutor Mr Rosten, Dr Brissenden, appearing for the accused pointed out that Drew had already been sufficiently punished by having to face the charge. His Honor, Judge Scholas, withdrew the case from the jury, and discharged Drew.[7]&[8] Drew walked away a free man without penalty. There was to be no justice for the family.

Sadly, nothing would bring Agnes and Harry back to their young family. Arthur age 10 and Freda age 12 were left as orphans to be brought up by relatives. Just a month after the shooting, Harry’s mother, Caroline, passed away and while she had been of “indifferent health for some time, led an active life almost to the last.  Her end was hastened by the shock occasioned by the death of her son and daughter-in-law.”[9]

2019 marked the 100-year anniversary of this dreadful tragedy. Descendants of Harry and Agnes Long gathered at the Grafton General Cemetery to share photos, stories and letters and pay respects to the young couple. While I didn’t attend, I did call by the cemetery a month later on my way home from Sydney and stood in front of Agnes and Harry’s grave pondering that fateful day and thinking how things could have been different had they not varied their routine.

Acknowledgment:- Photos of Harry and Agnes Long taken from Own Pioneers : The Grebert and Heldt Story – Moreen Luscombe, shared on the Clarence Valley History Past and Present Facebook page.