I recently developed a presentation called Ancestors who sailed the seas for the GSQ Wednesday morning Zoom help meeting. The aim of the presentation was to highlight a range of resources for finding information about sailors, the ships they served on, and the shipping companies that employed them. I used examples from my own family to illustrate what I found and where I found it.

Who were the sailors in my family? Unsurprisingly to me, they were on my maternal line as my mother came from Liverpool, a significant port city and centre of a huge amount of maritime activity.  Some years ago I visited Liverpool, where there is a Maritime Museum located at Royal Albert Dock (https://www.liverpoolmuseums.org.uk/maritime-museum. Worth a visit if your ancestors have a connection with this amazing city.  The Royal Albert Dock celebrated its 175th anniversary in 2021 and from its website, the museum appears to have been significantly upgraded since my visit.

My father served in the Royal Navy in WW2 as did my maternal uncle, but they don’t feature prominently in this blog post mainly because records are sparse and researchers can face significant delays in accessing them. The ancestors who fascinate me and provide endless hours of research to tease out their stories are my grandfather, Walter Johansen, and his father, Martin Johansen. I’ve written about both of these in previous posts.

Martin Johansen was Norwegian and appears to have spent most of his maritime career in the 1880s and 1890s on ships traversing the transatlantic, having signed on in Liverpool. These ships carried significant numbers of Scandinavian migrants, who left their homelands, travelled by ship to Hull on the east coast of England, went overland to Liverpool where they boarded the ships that would take them across the Atlantic. Migrant ships often made a further port of call at Cobh in Ireland, where many Irish migrants were picked up. The majority of passengers disembarked in New York, although many ships travelled on to Montreal in Canada. Great grandfather Martin worked as either a steward or interpreter on these migrant ships and a family story is that he spoke five languages. His ability to speak several languages would certainly have helped the migrants, many of whom would have had no, or limited, knowledge of English.

Transcription of Crew List for Martin Johansen 1891 accessed at FindmyPast

Martin and his English-born wife Elizabeth had married in Liverpool in 1881 but he didn’t give up his life at sea crossing the Atlantic numerous times throughout the 1880s. Perhaps he intended to migrate to America himself as he worked ashore towards the end of the decade in New York. I found him listed in an 1888-1890 New York directory as a clerk, which indicates a level of literacy and perhaps confirms his ability to serve as an interpreter. My great grandmother Elizabeth had joined him in March 1888 and my grandfather Walter was born three months later in May 1888. For whatever reason, and there are some family stories that cannot be verified, by January 1891 Elizabeth and son Walter were back in Liverpool where Elizabeth gave birth to another son, Martin. Martin snr had returned to seafaring but it seems he visited Elizabeth from time to time. Another son, John, was born in July 1894, but died within 3 months.  My last confirmed sighting of Martin, either on or off-shore, is when he signed on to a ship, the Sarnia, in 1894, a ship he had sailed on previously. This year I’ve done more research on his origins in Norway as I believe my earlier conclusions are no longer valid. However, that is another story.

Walter and his young brother Martin were orphaned in 1897 when Elizabeth died of typhus fever; this is spread by lice and fleas which suggests that Elizabeth and her two sons weren’t living in the best of circumstances. Some time after her death the boys were committed by a local magistrate to a Catholic orphanage in Liverpool in distressing circumstances. In due course, Walter was released into the care of an aunt, discharged in 1904 and by 1908 he had enlisted in the Royal Navy being posted to Devonport in Hampshire for initial training. He had signed up on a short service contract: 5 years active service and 7 years in the Royal Naval Reserve.  He rose steadily from Stoker I to Leading Stoker. The 5 years short service contract expired in October 1913 and he was recalled to service from the Reserves in July 1914, just prior to the outbreak of World War 1. He may have returned to Liverpool in that period possibly to meet up with his brother, but he also met my grandmother and they married in 1915.  Martin jnr appears to have had a troubled life in and out of institutions. He subsequently enlisted in the Lancashire Fusiliers and died on the Somme in July 1916.

Walter served throughout WW1 in the Royal Navy and was eventually discharged in 1921 when his contract expired. He found work as a grain porter on the docks and started a family, but life in post-war Liverpool would not have been easy. Perhaps the living and working conditions prompted him to return to the sea to improve the finances of his growing family. Resuming his former occupation as a stoker, he signed up as Fireman and Stoker on various cargo ships between 1928 and 1930.

I have been fortunate when searching for his records as I’ve only ever found one Walter Johansen. His RN service record and his merchant navy records are now online at The National Archives (TNA), and also on FindmyPast, but were not when I originally located them many years ago.

The RN service record is detailed. It records his career from date of enlistment until his final discharge in 1921. The names of the ships on which he served, together with the relevant dates, are listed – some of these are ‘stone ships’ or shore bases. There’s an assessment of his character on each deployment – Very Good. I was surprised at just how many stokers of differing ranks were deployed aboard these steamships. The life of a stoker would have been hot, steamy and unpleasant, especially if a ship was in the Far East; I imagine stokers would have worked in teams so the camaraderie amongst them would have been high. My mother related her father’s tales of sailing during typhoons in the China Seas. This must have been scary if you were below deck and couldn’t see what was going on, but could feel the ship heaving and rolling. They would have had shore leave and many sailors experienced customs and cultures widely different from the UK. He brought many souvenirs back from his time on board ship, some of which are in my mother’s possession. Others have unfortunately been lost over the years.

Records for merchant seamen are much more dispersed. All merchant navy sailors were issued with a Dis A (Discharge A) number. The register of these numbers was maintained from 1918-1940 and each number is unique to an individual seaman. Important in identification and invaluable in distinguishing between seamen with the same name, these numbers also help to trace a career.  I can still remember the excitement of finding my grandfather’s card from 1928 when I scrolled through microfilm at TNA. His origins have been shrouded in mystery since he was orphaned at such a young age and this card was therefore really helpful in starting to piece his life together. 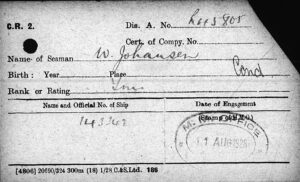 Example of a Dis A. card

The cards include a physical description, including identifying tattoos, date and place of birth, the official number and sometimes the name of the ship on which he worked together with the date. There are 2 other Dis A cards in my collection, another issued in 1928 with different ship numbers and the second issued in 1930, which shows he worked on several ships, possibly consecutively.  Each ship has an official number, which is important when trying to identify which ship an ancestor may have worked on. Ships were often renamed, and over time there may have been several with the same name. The one thing that didn’t change was its official number. 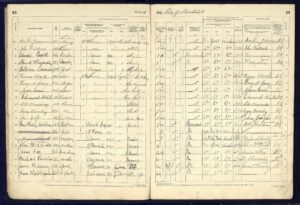 Walter’s father, Martin Johansen, has been a little more difficult to research, although more records are now coming online. Crew lists have been invaluable and I have discovered his transatlantic voyages mainly on ships belonging to the Inman Line. The Inman Line specialised in taking Scandinavian migrants to America and ships were often named after a city, e.g. City of Montreal, City of Richmond, City of Chester. The Crew List Index Project (CLIP) ( https://www.crewlist.org.uk/) is invaluable in locating crew lists and ships. The site has a variety of databases under the headings of People; Ships; and Documents. The Documents section provides links to appropriation books, the Mercantile Navy List, a nautical almanack and even groups documents by archive and port.

Extensive holdings of crew lists and log books have been lodged at the Maritime History Archive (MHA) at Memorial University of Newfoundland  (https://www.mun.ca/mha/holdings/searchcombinedcrews.php) although not all have survived. A search using the official ship number may reveal whether records exist and, if so, where.  TNA still retains some apart from those transferred to MHA. Other crew lists may be found in local or regional records offices, especially in places with strong maritime links, e.g. Liverpool Record Office.

When researching an ancestor who sailed the seas it is advisable to start at The National Archives (www.nationalarchives.gov.uk) and read the helpful research guides. Research guides are available not only for the Royal Navy but also the Merchant Marine. They will enable you to place the records in context, understand who created them and why, and discover whether they cover what you are interested in. Using the Discovery search engine (https://discovery.nationalarchives.gov.uk/) will reveal not only records held at TNA but in other repositories.

Of the main subscription sites, FindmyPast has extensive RN and Merchant Marine collections, and many are also available on Ancestry. Using the power of Google can reveal a wealth of information on ships and shipping, which all helps to uncover the lives of our ancestors who sailed the seas. Finally, newspapers often carried shipping news reporting the arrival and departure of ships and it may be possible to trace the movements of ships on which your ancestor sailed. All these resources help to place your ancestors’ lives in context.