When I started my family history search into my father’s family, all I had was mum’s recollections and a handwritten copy of my grandparent’s marriage certificate.[1] My grandfather, Leonard Tunny (Len) said he was a farmer from Beerburrum, born in Cunnamulla and 29 years old when he married the 19-year-old Elizabeth Leitch Robertson (Lizzie) at the ‘residence of the bride’s parents’ on 20 September 1920 in Beerburrum, Queensland.

I knew where Beerburrum was, it is a small town nestled under the shadow of Mount Beerburrum on the north coast about 55km north of Brisbane, today just off the Steve Irwin Highway. I imagined a small farming community. Perhaps both my grandparent’s families had farms there?

The marriage certificate gave the names of Len’s parents Owen Tunny and Bridget Lennane and I was excited to trace his father’s family back to a convict, transported here from Ireland in 1836, who married the daughter of two convicts, she was born in Australia about 1831. His mother’s family also came as sponsored immigrants from Ireland in 1849. They all settled in New South Wales except it seems Len’s parents who came to Queensland. 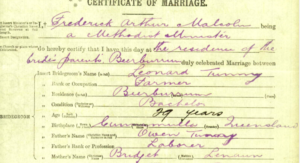 Part of the marriage certificate of Leonard Tunny & Elizabeth Robertson in 1920 showing his parents names.

For a long time I couldn’t find a marriage record for Owen and Bridget or birth registrations for any children. I eventually found records for five children born to Bridget Lennane. None of these was my grandfather. All were registered under Lennane and Tunny but also in the name of Power. Why was this? On the registration of her daughter Clara’s birth in 1887, Bridget claimed that she and Owen married at Cunnamulla on 17 March 1884.[2] Len is shown as two years old. But in 1886, Bridget married a man named James Power in Cunnamulla, Queensland.[3]

I changed the dates in the search field for Len’s birth to show from 1884 and looked under Lennane and, success! I found it.

William Leonard Lennane was born in Cunnamulla in December 1884 to Bridget Lennane. Was this really my grandfather? This meant he was 35 years old, not 29, when he married Lizzie. I sent for a copy of the original registration document.[4] Illegitimate is written where the fathers name is usually put and Power pencilled after Bridget Lennane. So, it seemed that this was him.

Well, this put a bit of a dampener on my Tunny Family story. Now I didn’t know whether Owen was Len’s father. And what about all my research? I had become quite attached to some of these early convicts, especially some of the women. So it looked like Len was the son of James Power. I felt a bit strange. I have kept my family name of Tunny through two marriages. Not because I particularly liked the name, but I felt attached to it, nevertheless.

I then tried to find out more about James Power and found that he died in 1915. I ordered James Power’s death certificate.[5] He died from falling off a dray in 1915 at Cunnamulla. It also states he had no children. But he may not have known. He had been married to Delia Maria Burke, who had died in 1885 before he wed Bridget. I started to think maybe Len was not his son either.

I’ve had a DNA test and I have matches with people descended from Bridget Lennane’s family. I have also had contact with descendants of two of Len’s siblings and they have had DNA tests too. One seems to be descended from Owen Tunny, another, like me is unsure. To date I haven’t found any matches on my test with a definite link to Owen Tunny, or James Power.

Like so many things in family history research, I may never know. But I think that’s the challenge and fun for those of us who diligently search our family trees, and I’ll keep looking.

Regardless of whether we are related biologically, it seems likely that Owen was a father to Len and the other children. He raised him from the age of two and later electoral rolls entries show them working together on various sheep stations around the Maranoa region. Bridget and Owen seem to have remained together, even though they never married after James Power’s death. Perhaps they didn’t know. Or maybe after living for so long as husband and wife, there seemed little point. Bridget was still known officially as Bridget Power when she died.[6] They are both buried at Yuleba, where the family settled, and young Len Tunny grew up.[7] 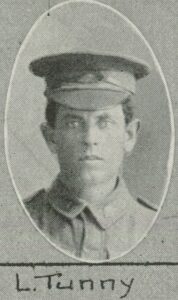 L Tunny, one of the soldier photographs in The Queenslander Pictorial Supplement, page 24, 9 December 1916. Image (out of copyright) held at Oxley Library, State Library of Queensland.

In 1916, following news of the disaster at Gallipoli, Len enlisted. He was assigned to the 4th Pioneer Battalion, Reinforcement number 6.[8] But he didn’t make it to France, which was probably a good thing. In February 1917, still in England, he was injured and returned to Australia 4 May 1917.[9]

But it still doesn’t explain how Len got to Beerburrum. My story on Len will continue in a follow-up blog due for publishing on 7 February 2023, hope you will join me then.